Home » The Faroe Islands Is An Adventure Sports Paradise, And It’s All Down To Their History

The Faroe Islands Is An Adventure Sports Paradise, And It’s All Down To Their History

How did ancient survival practices sew the seeds of a thriving adventure sports scene in the Faroe Islands?

The Faroe Islands is an archipelago, made up of eighteen islands, which sits halfway between Iceland and Norway.

The dramatic land masses rise up from the deep blue hues of the frigid North Atlantic to form some of the most stunning scenery on earth. Rivers snake their way down lush green mountain sides, brightly coloured villages nestle in the crooks of vast glacial valleys and waterfalls cascade off towering cliffs into the sea. 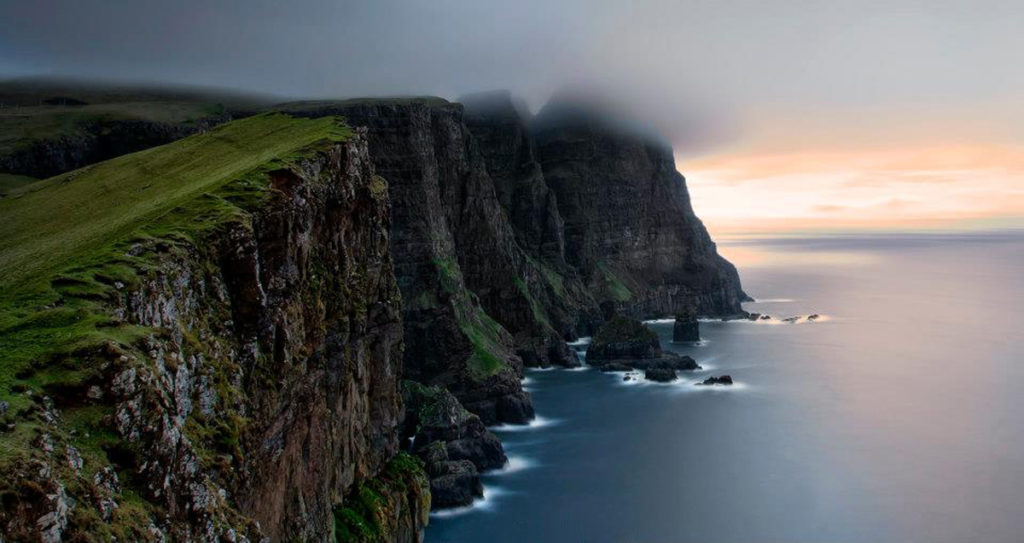 For centuries the intrepid folk who called these islands home were locked in a battle for survival against the harsh elements and unyielding landscape, with every day spent rearing sheep, fishing and hunting. However, in recent years, regular food imports have allowed for more varied interactions with the land and sea to take hold. Among these is an array of outdoor adventure pursuits which have gained popularity among both locals and tourists in the last few decades. 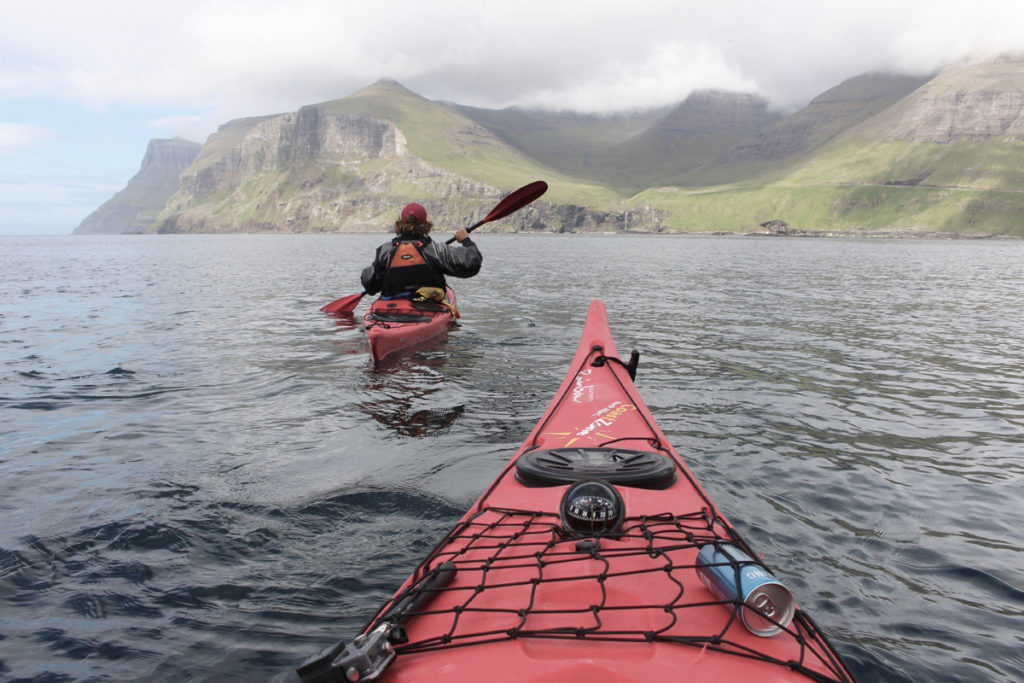 On a recent visit to the islands, scouring the rugged coastline for surf in the new Bentley Bentayga V8, we arranged to meet up with the nation’s sole pair of local surfers, Kat and David, to learn more about the outdoor sports gaining momentum on the isles.

“Young Faroese people see more possibilities now than we did even a few years ago,” Kat told us over a beer in a cosy bar. “Before, everyone wanted to get out of the Faroes, but now they tend to come back, because they see the opportunities to do activities using the elements we have here.”

“Now we have a lot of climbers, a lot of mountain bikers and a lot of paragliders” added David. “Although there are still only two kitesurfers and two surfers.” 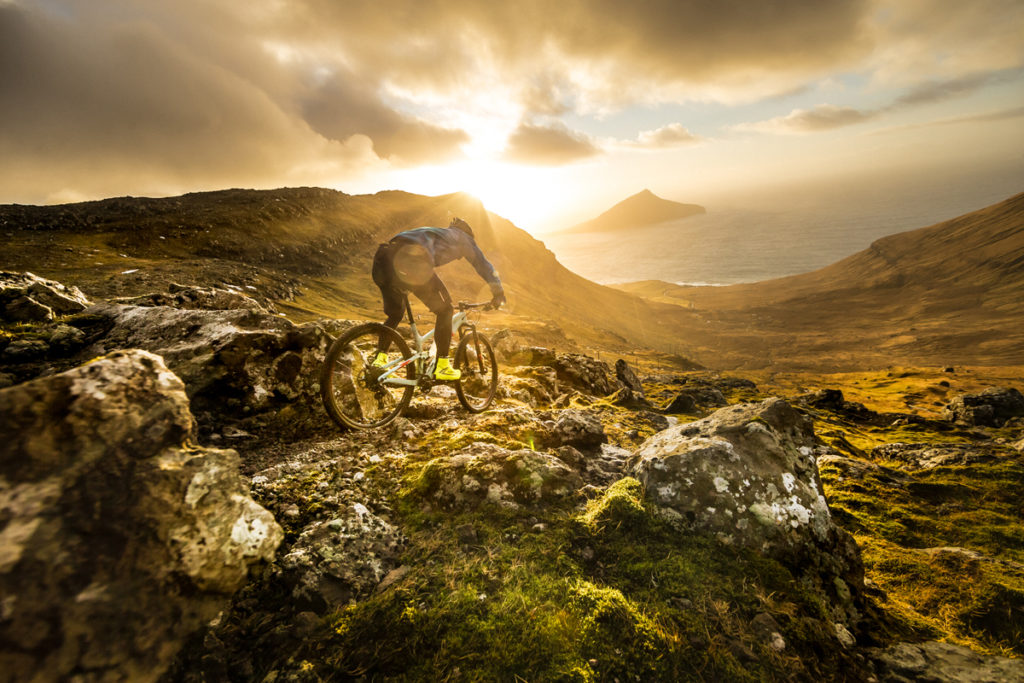 “In the past, the mountains and the ocean were where Faroese made their livelihood, not somewhere you go for fun,” Kat explained. Indeed, many of the modern-day sporting activities find their routes in practices carried out by Faroese forefathers out of necessity. One prime example of this is diving.

The Torshavn diving association was founded in 1957, long before dive suits made it to the island. The early proponents, inspired by diving idols abroad, would immerse themselves in the freezing waters in nothing but woollen clothes, swimming trunks, a diver’s mask and flippers.

The practice first began when a small group of fisherman would dive after car tires, which were used to line the quayside in Torshavn. As there were very few cars on the island back then, these tyres were a surprisingly valuable commodity and retrieving them from the seafloor was an important task.

With each generation since, new technology and equipment have allowed diving to grow and transform into an educational and leisurely pursuit. Nowadays, hundreds flock to the islands every year to join the locals in the serene underwater kelp forests, or on the edge of the amazing subaquatic drop-offs, where the volcanic islands fall away into the depths.

The development of rock climbing in the Faroes boasts a similar historical trajectory. The activity dates back to island’s earliest settlers, who would set off up the cliff faces in search of seabirds to eat. More recently, farmers would scale the steep rock faces, equipped with nothing but a rope, in order to transport their sheep up to otherwise inaccessible grassy outcrops. Occasionally these early climbers would ascend the steep cliffs using tools and place anchors in the rock, paving the way for a generation of recreational climbers. In the last decade, modern techniques have taken off among the Faroese and a core crew of climbers has emerged, their sights set on the summits of the jagged sea stacks scattered around the archipelago.

When adventure has been so important to survival for so many years, it’s an easy transition from acting out of necessity to pursuing pleasure. All it takes is a pioneering few, looking at the land differently, to transform it from foreboding and inhospitable to full of adventurous possibility. 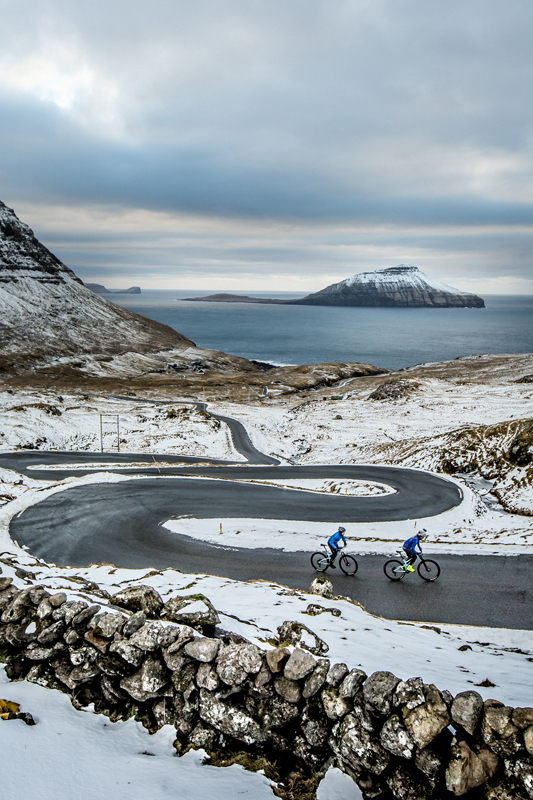 Of course, nowadays the outdoor action sports practised on the island extend way beyond those developed from these early practices. Road cyclists wind their way along beautiful roads, up steep mountain faces. Mountain bikers fly down precarious cliff edge trails. Wind and kite surfers flock to sample the island’s vast network of wind-battered waterways and an ever-growing number of surfers join Kat and David riding winter swells in the shadow of the most beautiful coastal scenery on earth.

We’d like to thank Bentley Motors for making this trip possible.

More stories like this:
Gallery: Wild Lineups From Around New Zealand’s South Island
Imani Wilmot Is Transforming The Lives Of Jamaican Women Through Surfing
Surfing In Malta: A Tiny Island In The Middle Of The Med