GALLERY: The Many Faces Of Nazaré By Helio Antonio - Wavelength Surf Magazine - since 1981

GALLERY: The Many Faces Of Nazaré By Helio Antonio

Nazaré born surfer and photographer Helio Antonio shares some of his favourite images and memories from several decades photographing the Portuguese behemoth.

For centuries Nazaré was a seaside town like any other.

Just a mass of white houses with terracottas rooves sprawling back from the coast where the beaches bustled with tourists, frolicking among brightly coloured boats and a tangle of fishing nets.

In the late 70’s a small crew of local surfers and bodyboarders sprung up to enjoy the wedgie peaks, along the dozen miles of sandy coastline that extended in each direction and for a few decades, the wider surfing world paid the town little attention.

Then in November 2011, Garett Macnamara whipped into an 80-foot wave at Nazaré’s northern beach and almost overnight, the place transformed into one of the most famous surf spots in the world.

Few have witnessed this sudden explosion in popularity as close up as surfer, photographer and lifelong Nazaré local Helio Antonio. Recently, we caught up with him to talk about the shift, the ethics of shooting surfers dancing with death and the standout moments from his three-decade-long love affair with his home break.

Tell me who you are and where you’re from?

My name is Helio Antonio, I’m 41 and I’m a photographer from Nazaré.

How long have you been shooting surfing and how did you get into it?

My first memory of shooting waves was buying a disposable waterproof camera, some 25 years ago when I started surfing. At the time I just wanted to get some images of those beautiful waves. Years went by and in 2013 I bought a digital camera and a water housing and things got more serious. 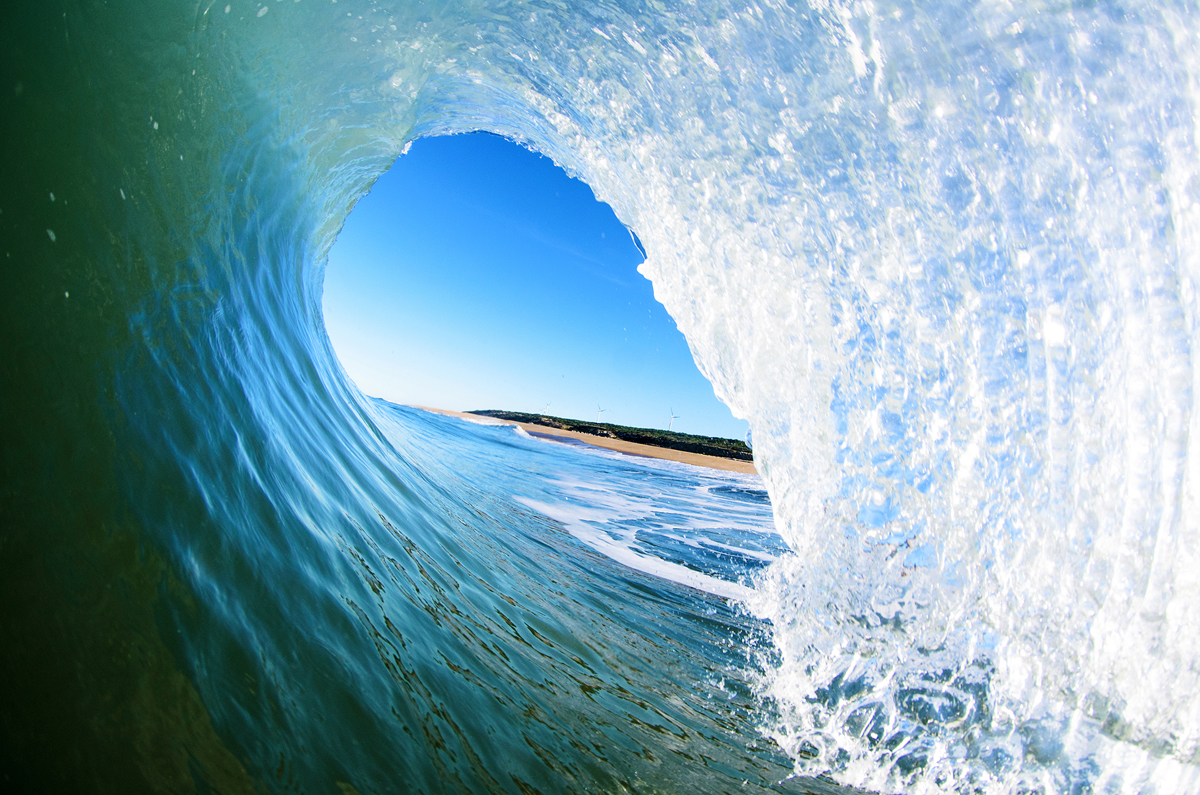 A cloudless sky lights the way through a playful Nazaré keg.

How much have you seen your hometown change over your lifetime?

It has changed a lot. I grew up surfing perfect waves at Nazaré’s main beach. Unfortunately, sand banks changed so much due to the harbour construction and it never really worked again. We would go to Praia do Norte (where big waves break) when the waves were small in town and it was basically empty. In the early 2000’s we had a few international bodyboard events with epic waves and the world got a glimpse of how good this beachbreak was. A few years later tow-in surf took over in giant waves and everyone knows what happened next. Nowadays there’s always someone surfing from 3 to 80ft but back then it was pretty much empty, except locals and a few crazy bodyboarders from other towns.

Nowadays, local surfers work for the big wave teams as spotters, jet ski drivers, lifeguards, photographers and videographers. Tourism skyrocketed, which obviously had a financial impact on local business. The iconic lighthouse was opened to the public in 2014 and reached 1 million visitors in 2019. The estimates point to a million tourists visiting Nazaré annually which is crazy considering that Nazaré is such a small town.

Thousands of people gather on the cliffs on big days and even on flat days, there’s people from all over the world cruising the area. Big brands want to be involved and sponsor events and surfers. A lot of people visit Nazaré, fall in love with the town and end up buying a place here. House prices and rents went up significantly. Portugal as a surf destination is being sold worldwide and Nazaré is the banner used by the national tourism entity. 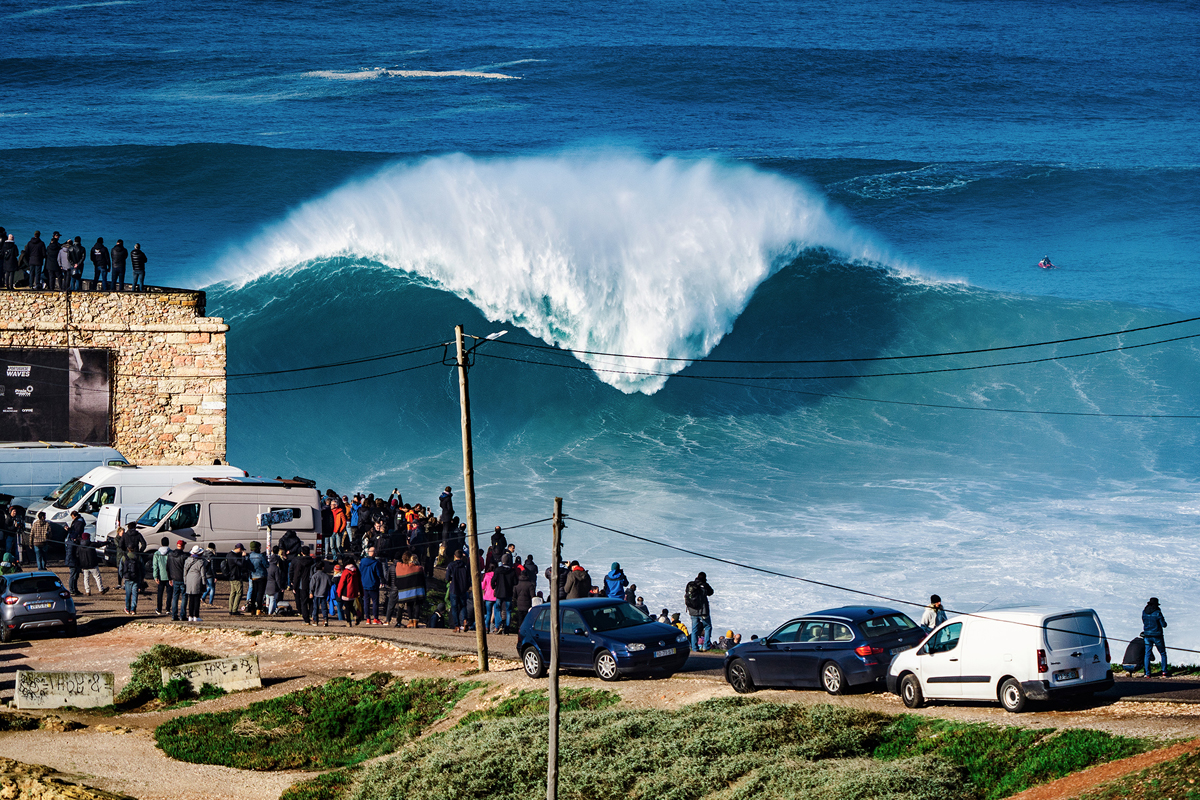 Crowds gather on the cliff to witness the world’s most famous teepee.

What is it that fascinates you about the place as a subject for photography?

Being a photographer for some years now, I find it hard to motivate myself to shoot the same spots. Nazaré is an exception. There’s so many different angles to choose from. The waves can break in so many different ways, shapes and sizes. The water angle is beautiful with the cliff and the lighthouse in the back. That’s the beauty of this beachbreak, the variety combined with the wave’s perfection and power.

Can you describe one really special day or session that stands out in your memory?

There’s so many epic days but the one that stands out the most was 1st of September 2014. During summer we know there won’t be amazing waves for 3 to 4 months so we’re always anxious for the first September sessions. This day marked the first swell of the season, no wind and the most perfect waves one can get on a beachbreak for only a couple of guys. 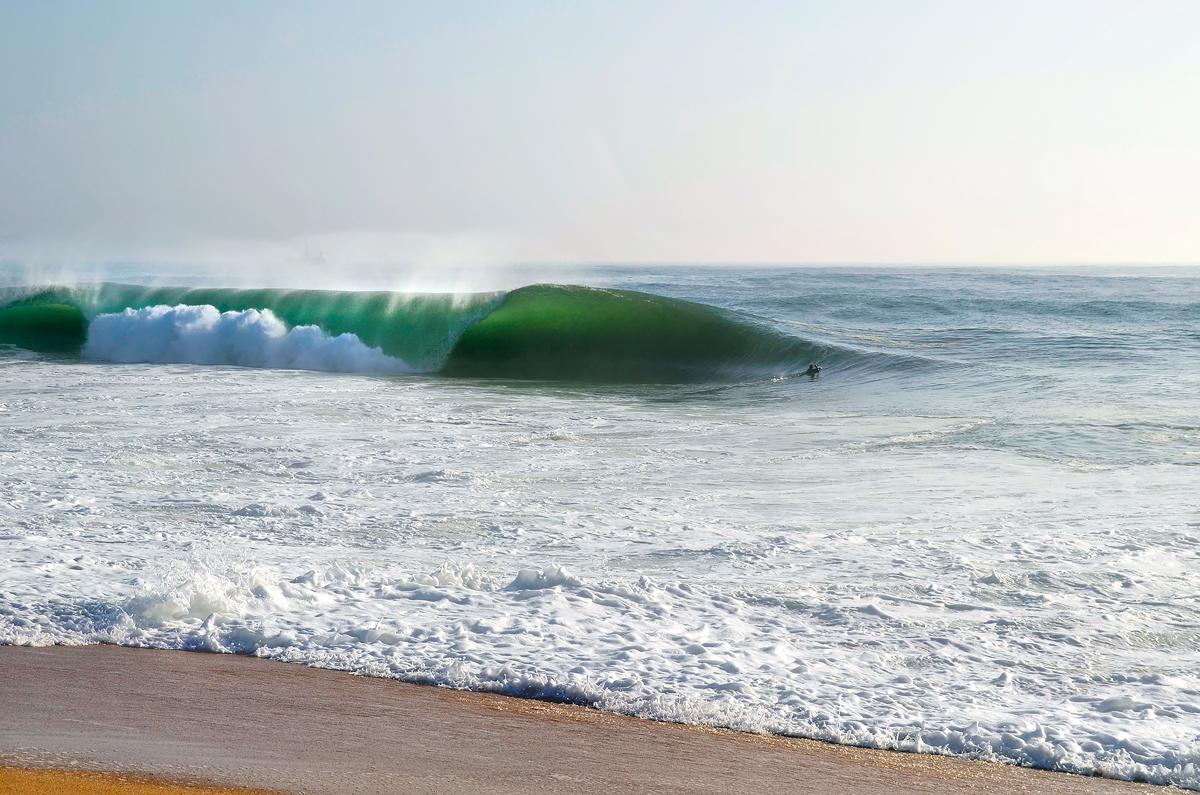 A local bodyboarder enjoys the view on the paddle out during the first swell of the 2014 season.

What’s the most impressive thing you’ve ever seen out there?

Hard to pick just one. Before the tow-in surf madness, Ricardo Faustino and Luis Porkito (two Portuguese hardcore bodyboarders) paddled from the beach, waves were huge, probably over 30ft. They didn’t know what they were getting themselves into and just tried to survive. Then there’s Kalani Lattanzi, the freak Brazillian waterman that goes swimming at giant Nazaré. I don’t think anyone else in the world can do what he does and he’s just there, floating in the middle of hell, where all the others just fight to stay alive. Go watch his movie “Kalani – Gift from heaven” to understand the level of what he’s doing. 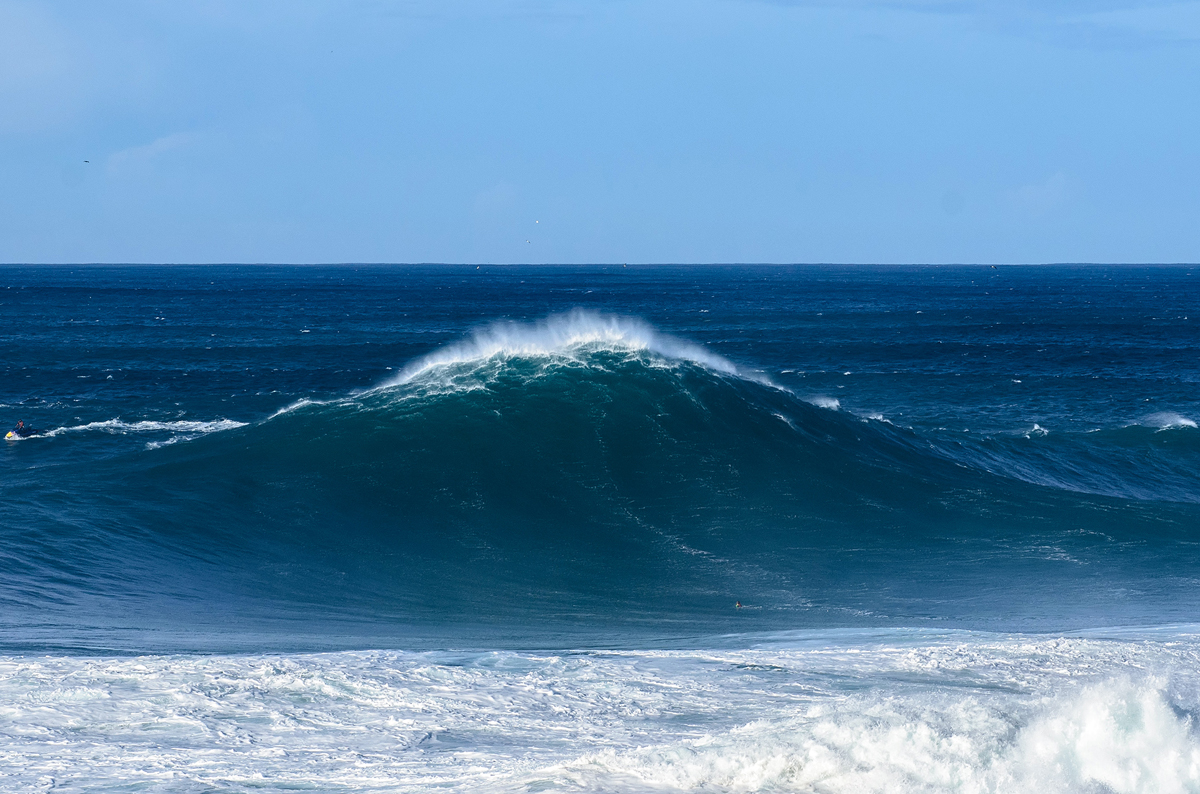 See that little dot at the base of this giant wedge? That’s Kalani Lattanzi out for a casual body whomp.

And the scariest thing?

A couple of years ago a Brazillian surfer wiped out and took the wave after on the head. It was one of those big, ugly, heavy a-frames with tons of energy and he was at the wrong place at the wrong time. He resurfaced unconscious floating face down and it took around 4 minutes till he was picked up by the jetski. I was pretty much sure he was gonna be the first casualty at Nazaré and watching this whole situation from the cliff without being able to help in any way was very disturbing. Fortunately, they brought him back to life. 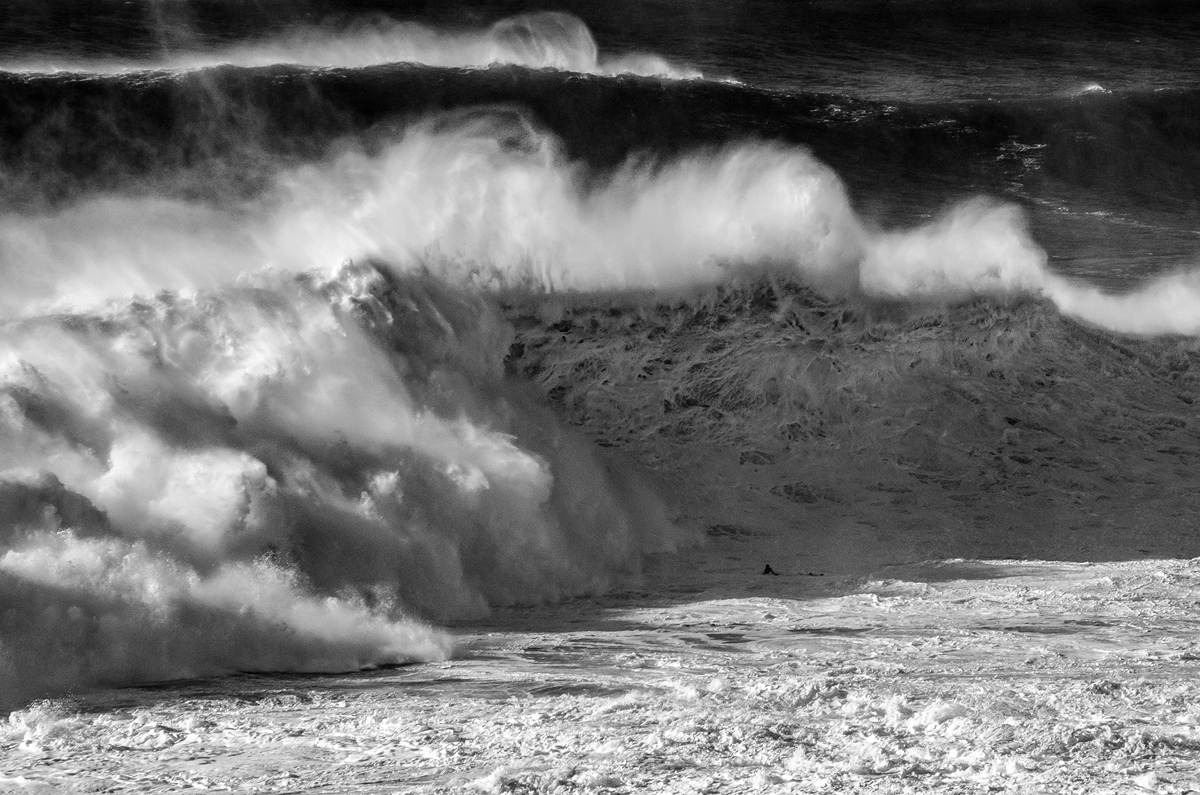 Imperilled surfer, with life vest inflated, wearing one on the head has become a familiar sight at the break over the last decade.

Do you worry you might one day be present for someone’s death?

I do. There has been at least three near-death incidents and it’s a very heavy experience just standing there watching. That’s why it’s so important that surfers have a multidisciplinary team to minimize the risks and in case anything goes wrong. 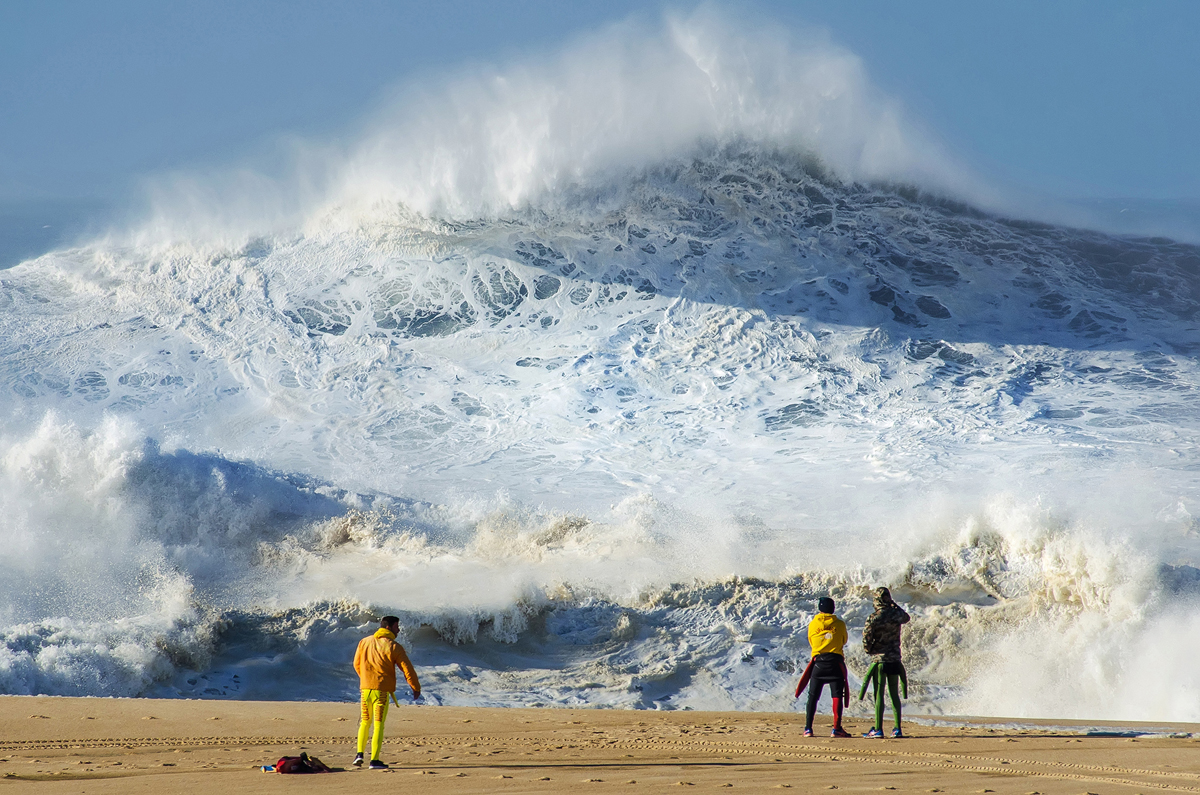 Beach spotters are an essential part of the multi-disciplinary safety teams that have been instrumental in saving numerous lives.

Do you feel like it’s important to document the rescues and near-death experiences, or would you decline to shoot if you saw someone lying face down?

As soon as I realise the surfer is lying face down I stop shooting. I’m not a photojournalist, I love shooting waves and all the rest around it is just noise. However I’m often working and as such, I photograph anything that might be relevant (wipeouts, getting pounded, rescues). I take zero pleasure shooting pictures of someone unconscious. It affects me, it’s a human life on the line and some of those surfers are my friends. 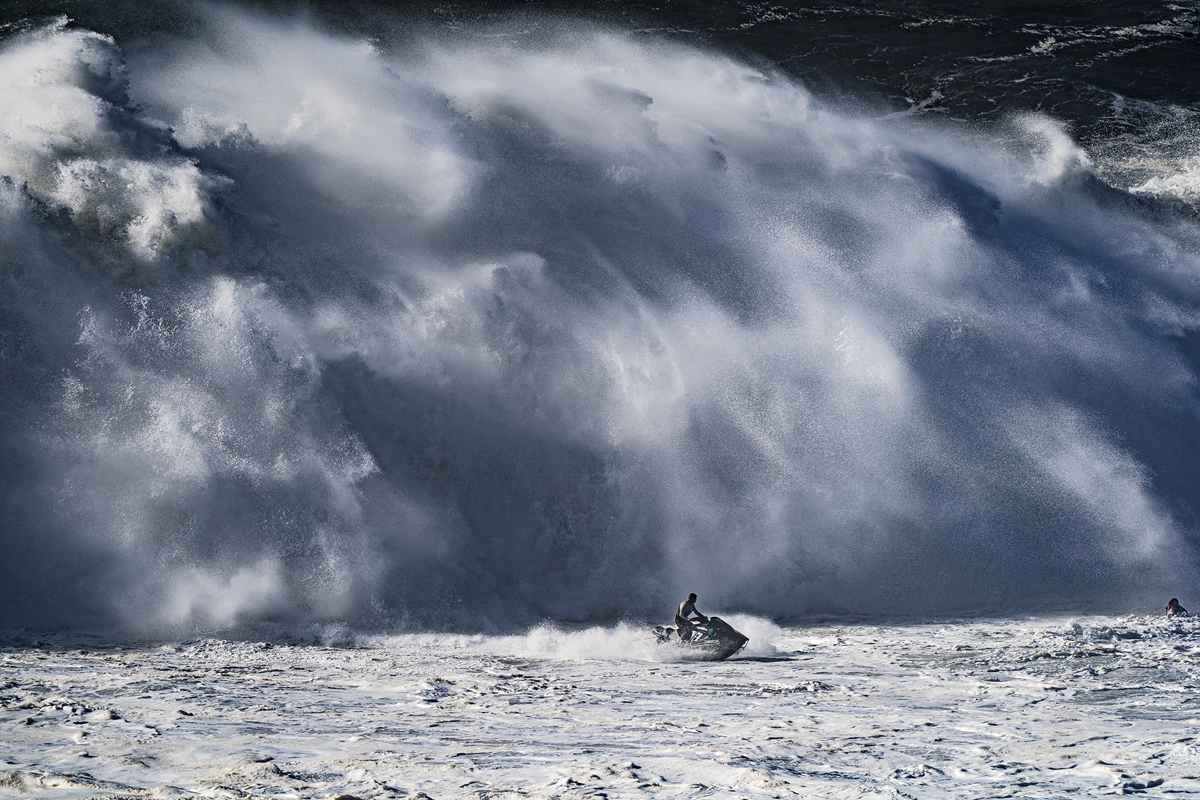 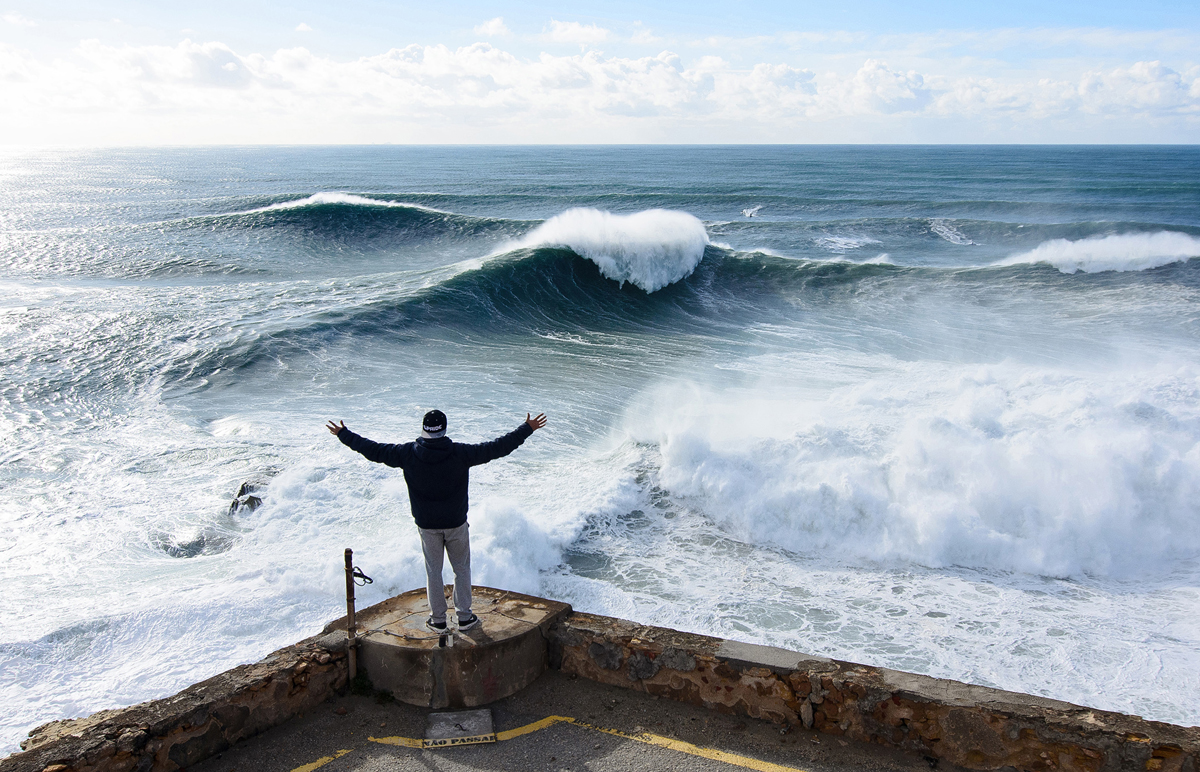 Part of what has allowed Nazaré to become such a media darling is the perfect natural viewing gallery the headland provides. 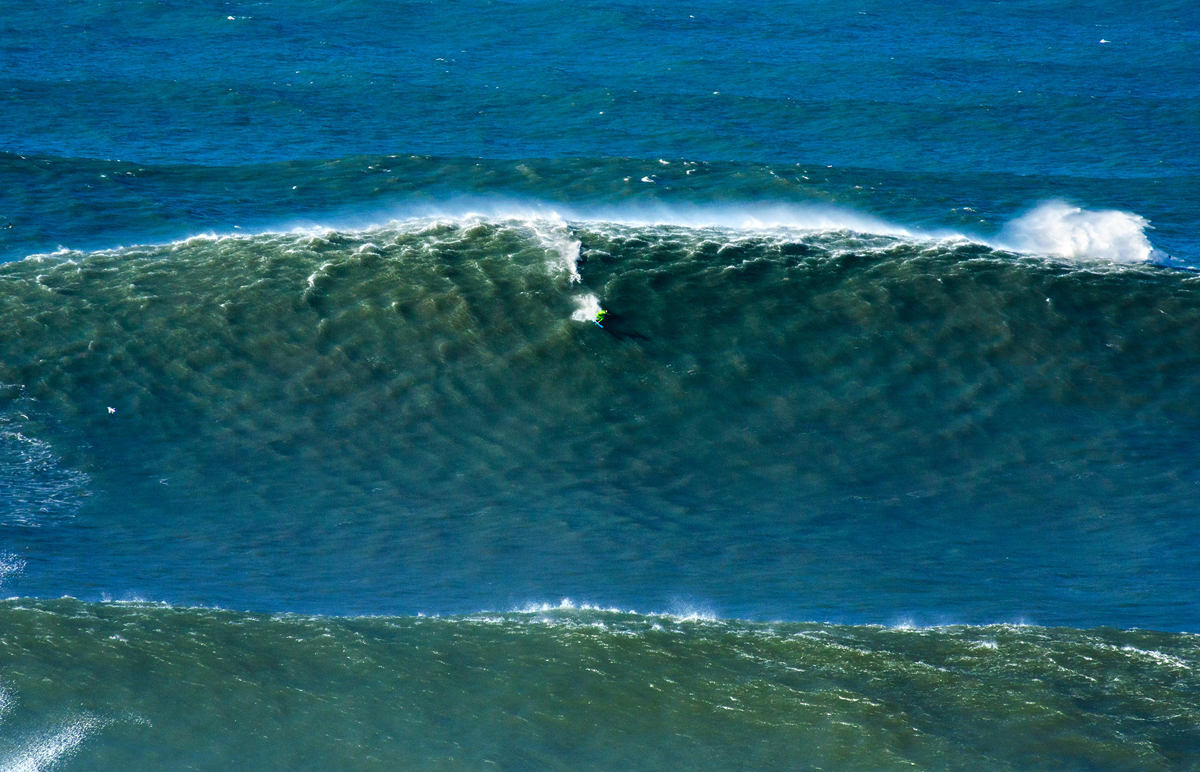 Kalani Lattanz again, this time opting for a tow. 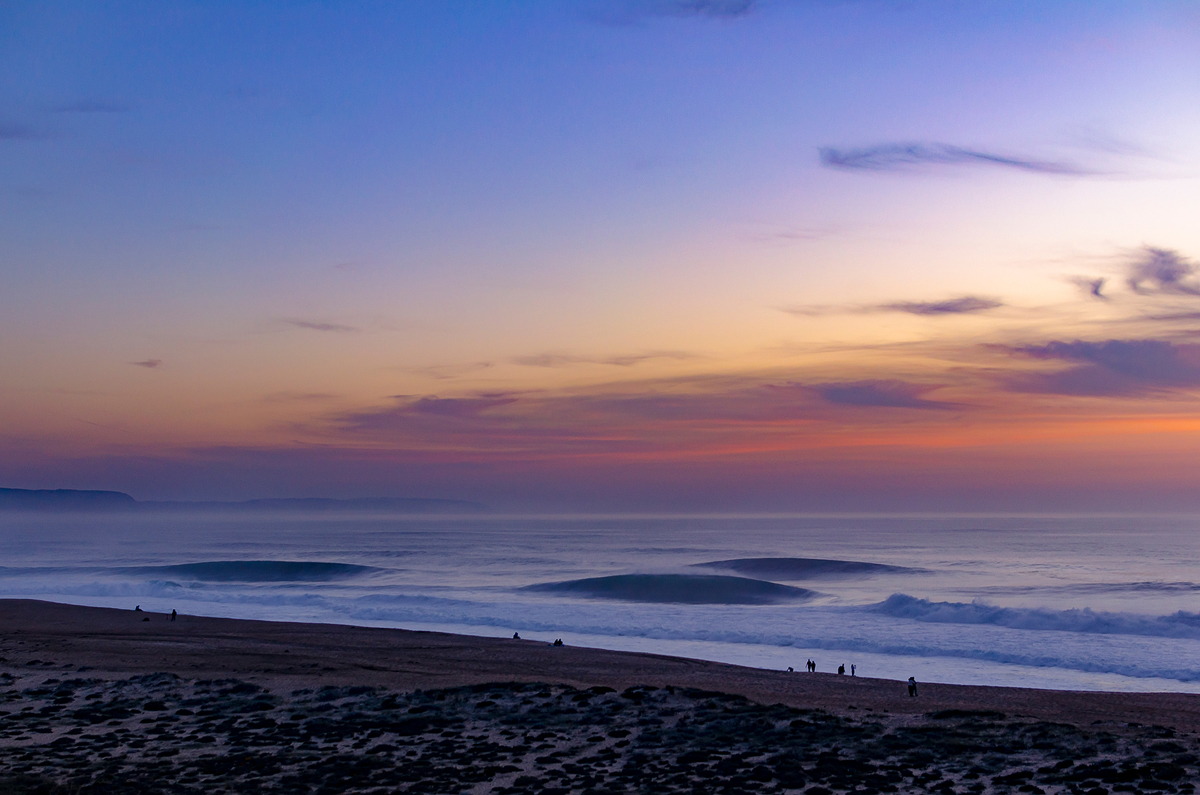 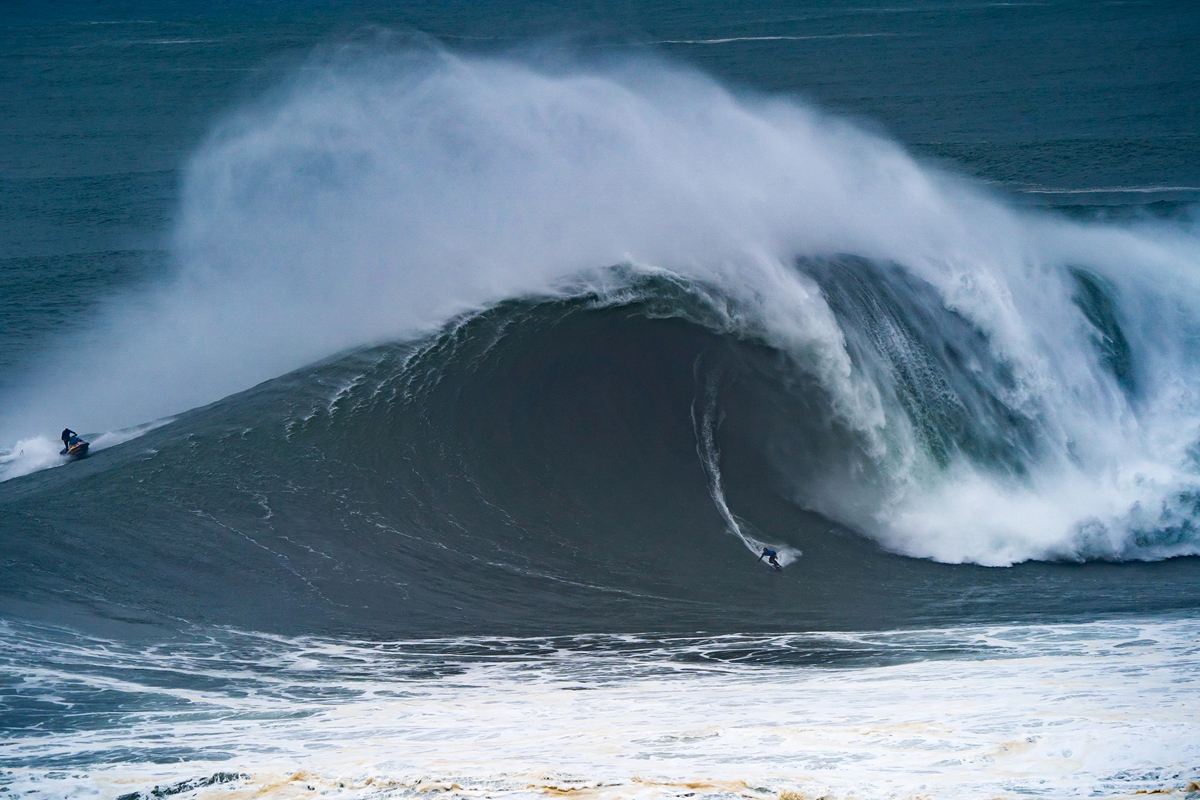 Kai Lenny takes off on a huge right during the recent Nazaré challenge. 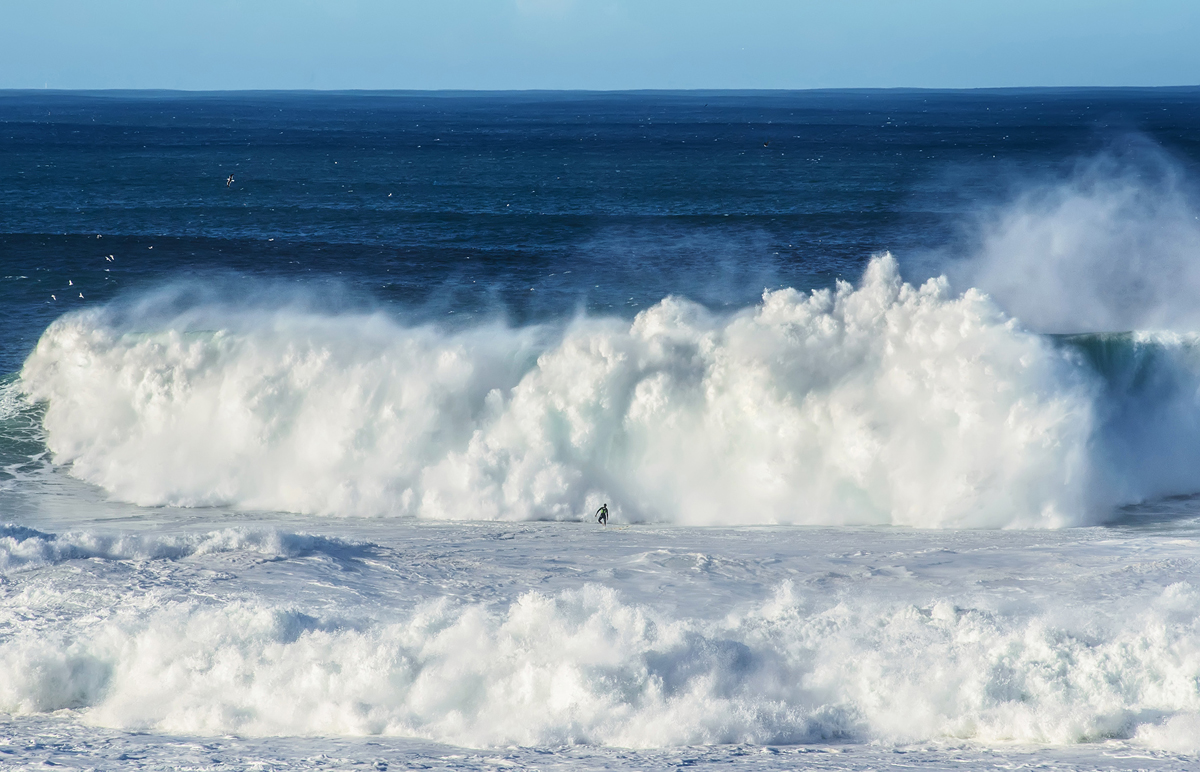 Lucas Chumbo faces down a surging wall of whitewash. 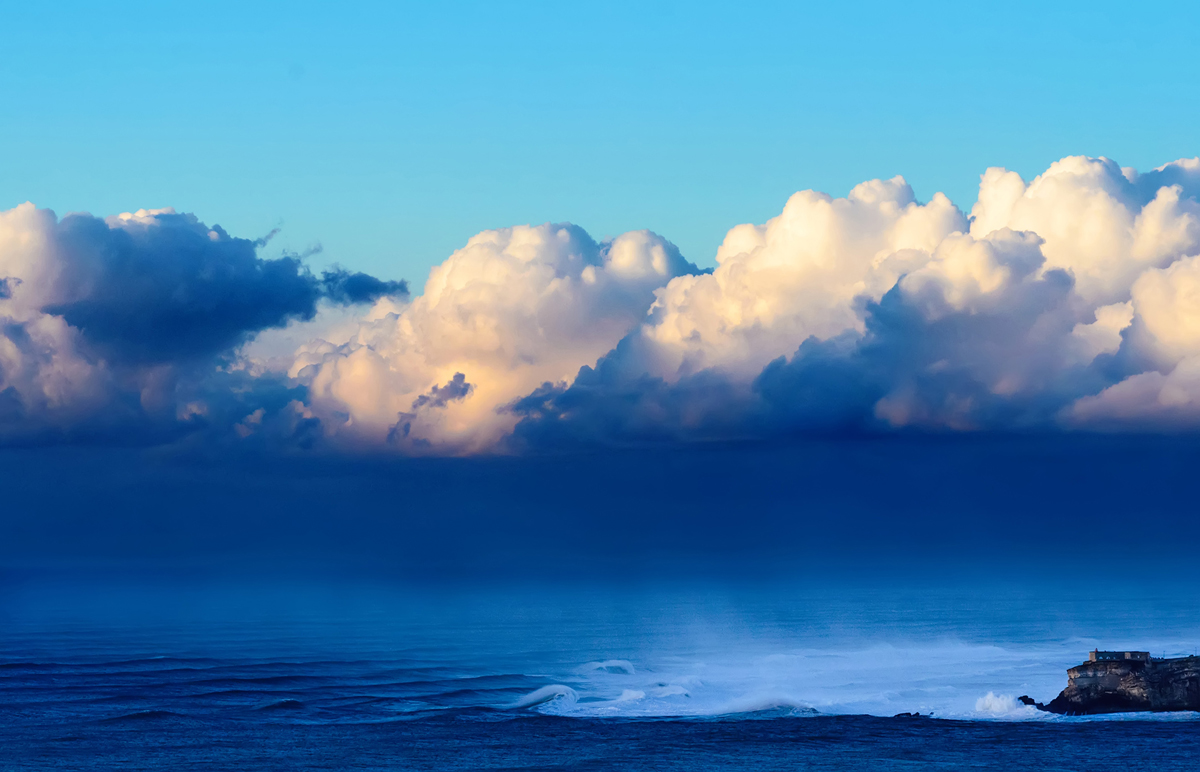 A rain storm hovers over Praia do Norte. 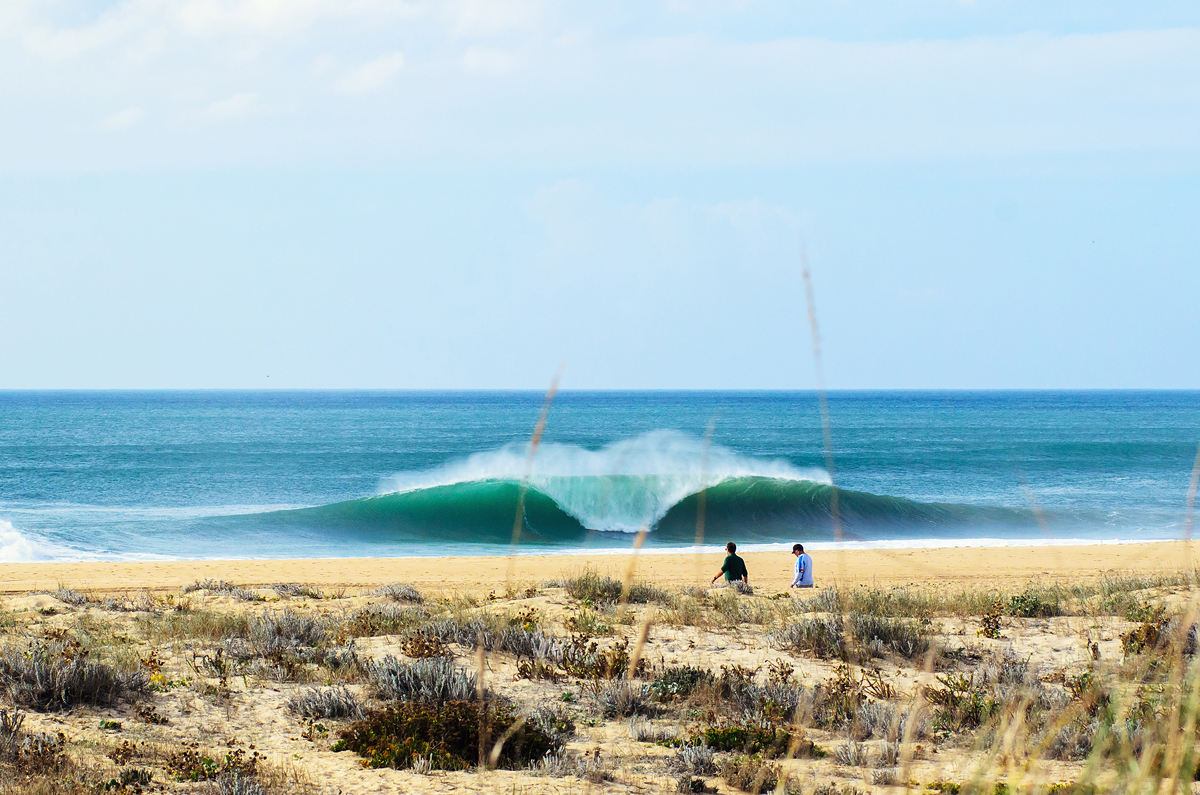 When the swell gets small enough, Nazaré throws up perfect a-frame kegs, similar to that offered by Supertubes just down the coast. 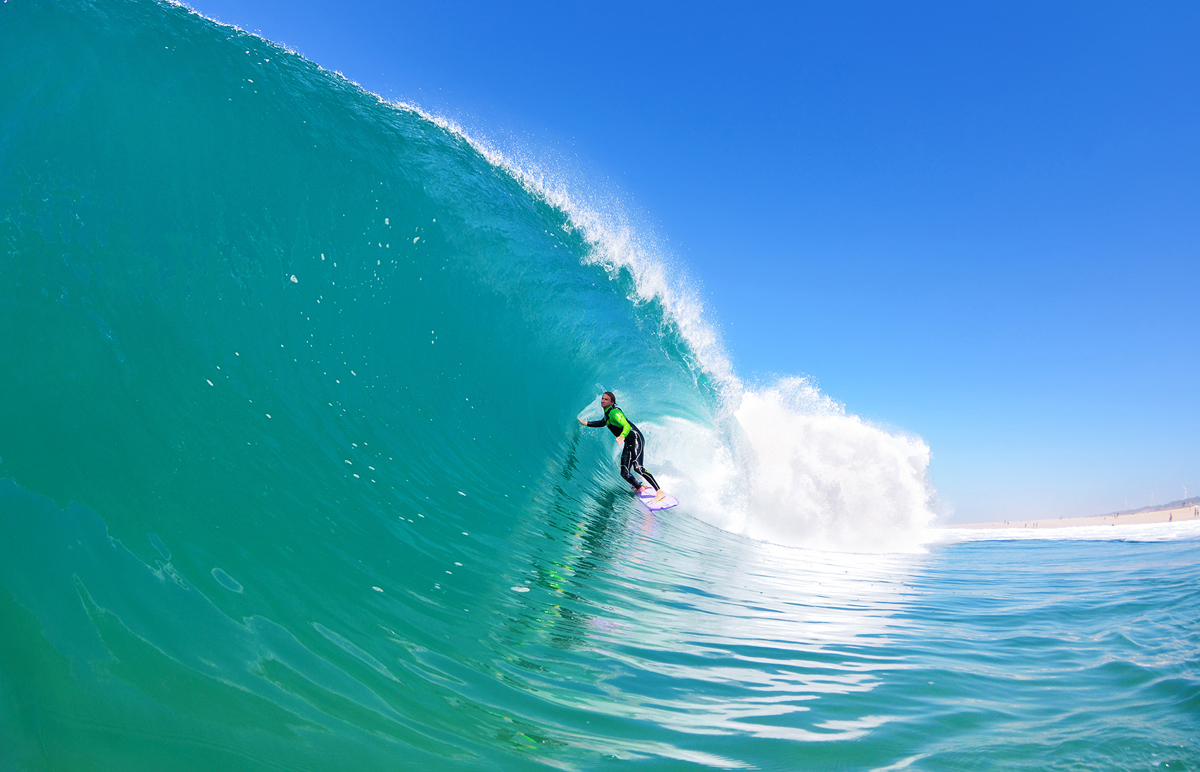 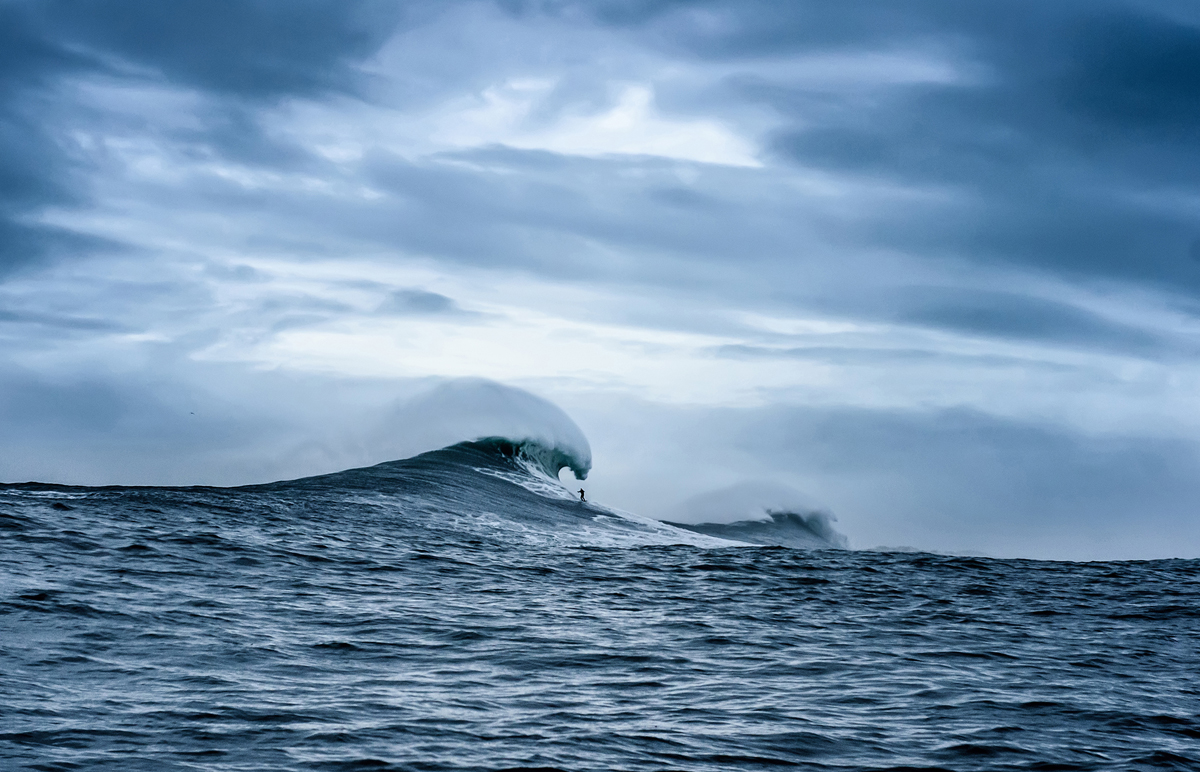 Andrew Cotton slips under the hood. 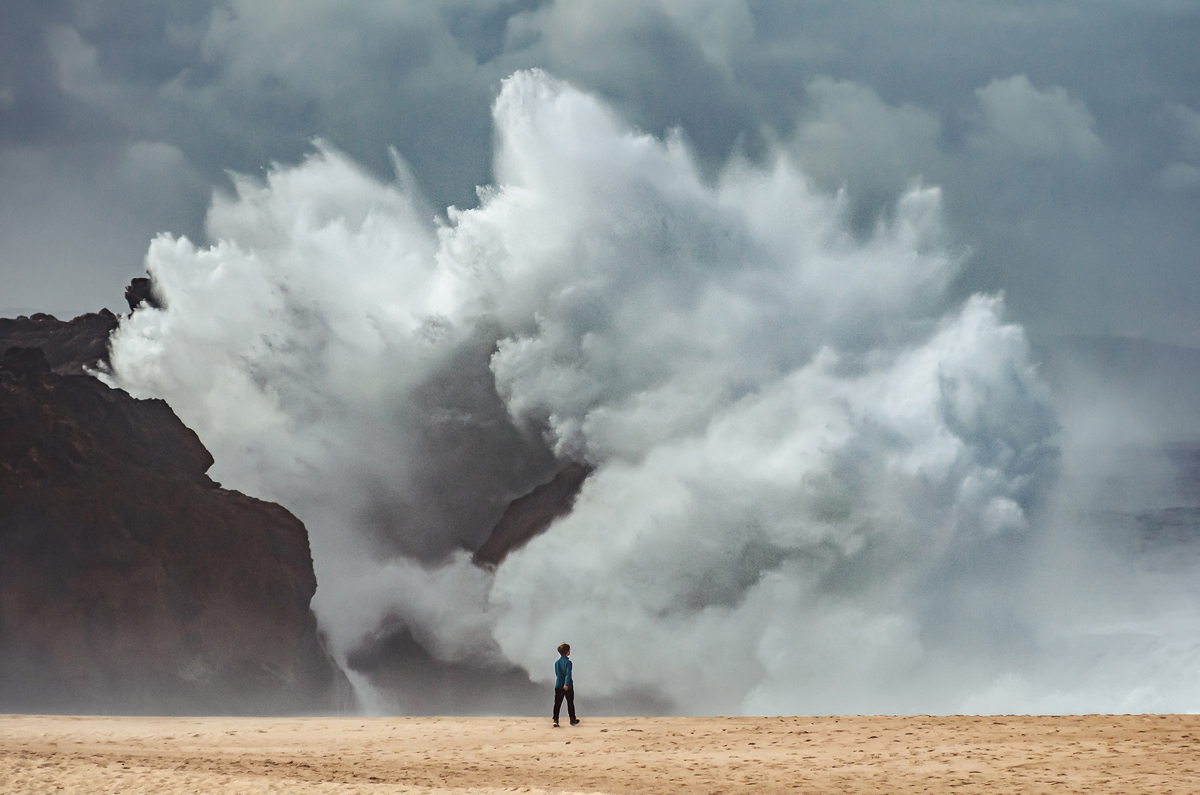 A woman takes a leisurely stroll as the raw power of the North Atlantic detonates on the headland up ahead. 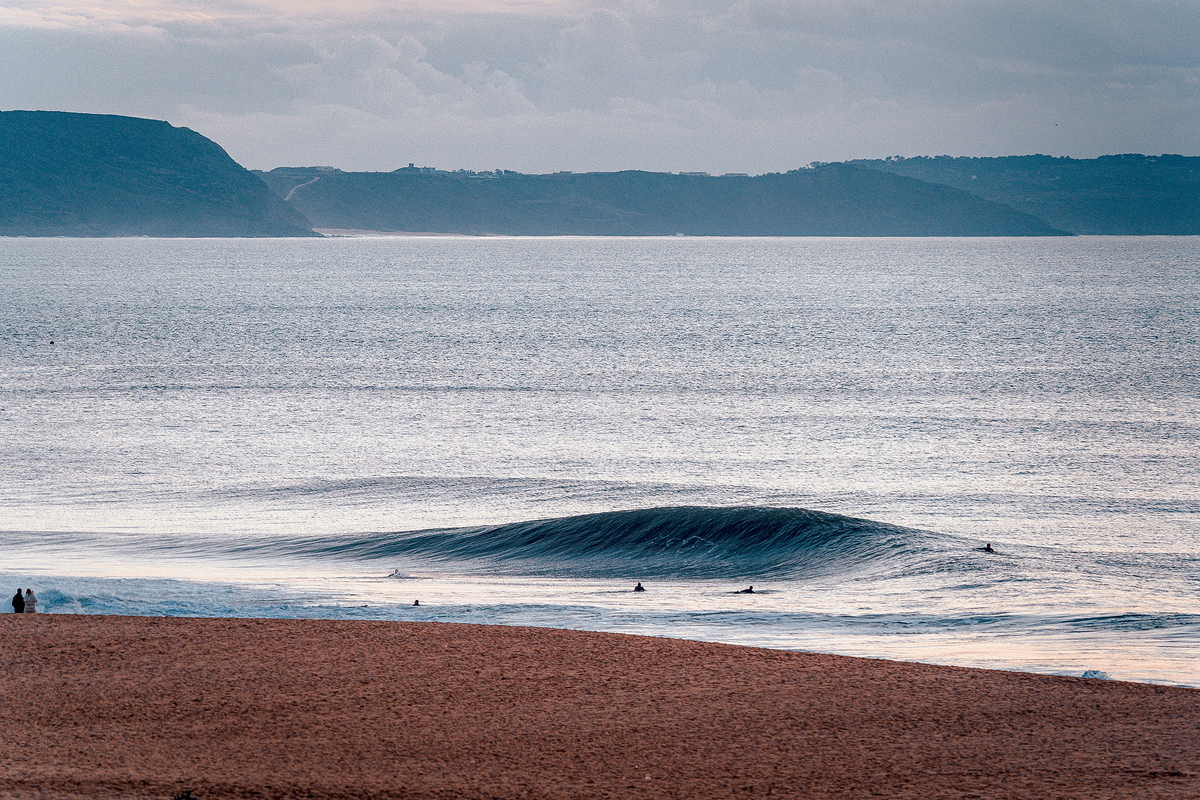 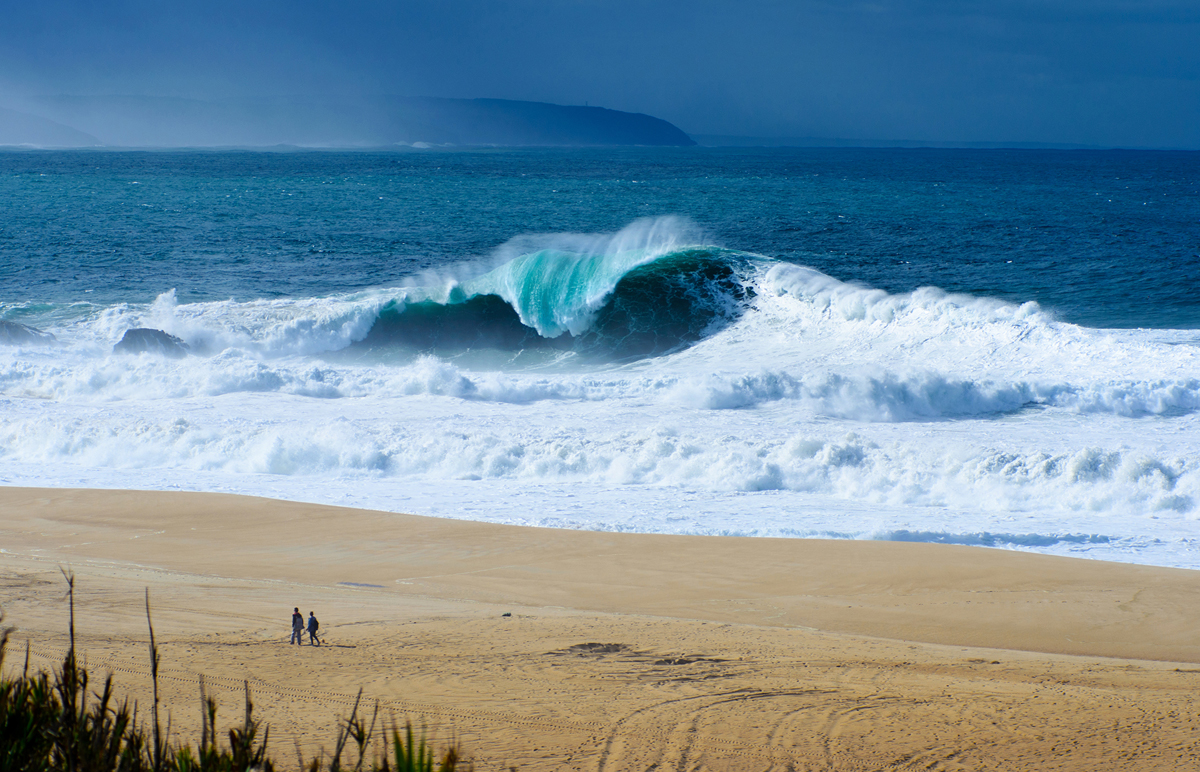 A death wedge rears up off the base of the headland. 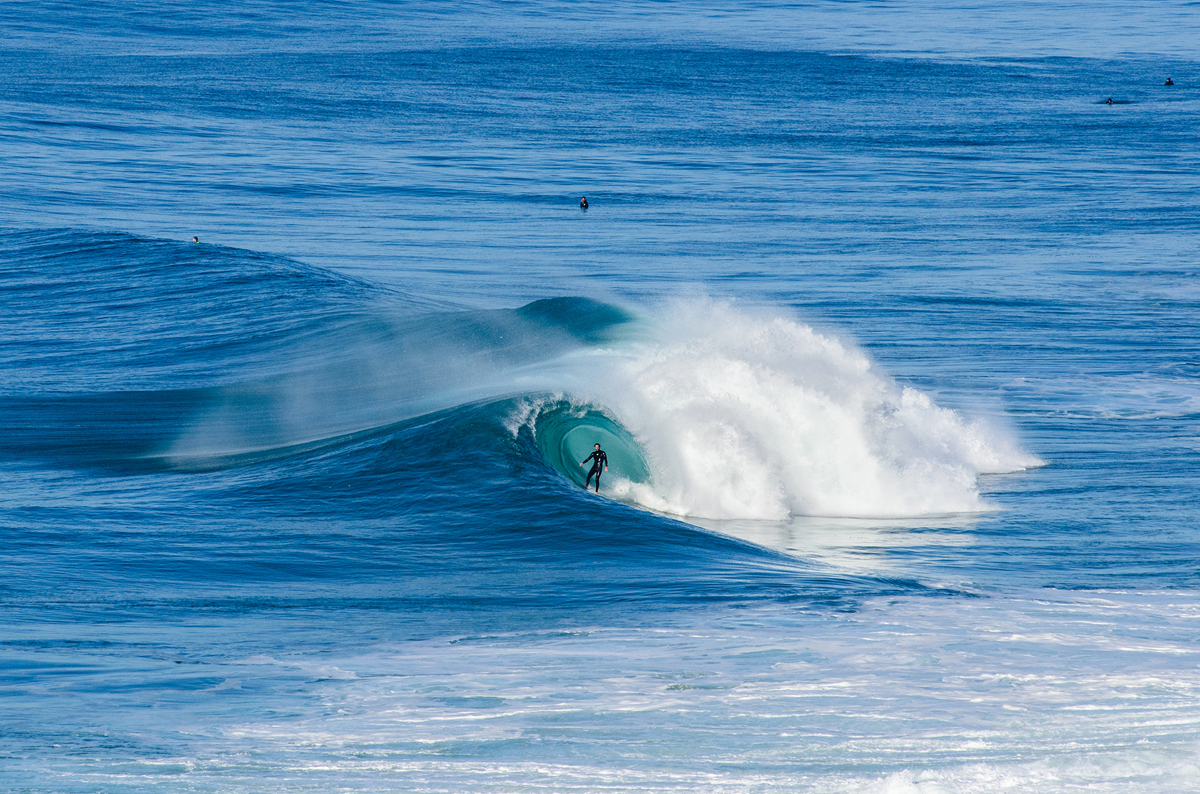 Frederico Morais stalls for a stand up keg. 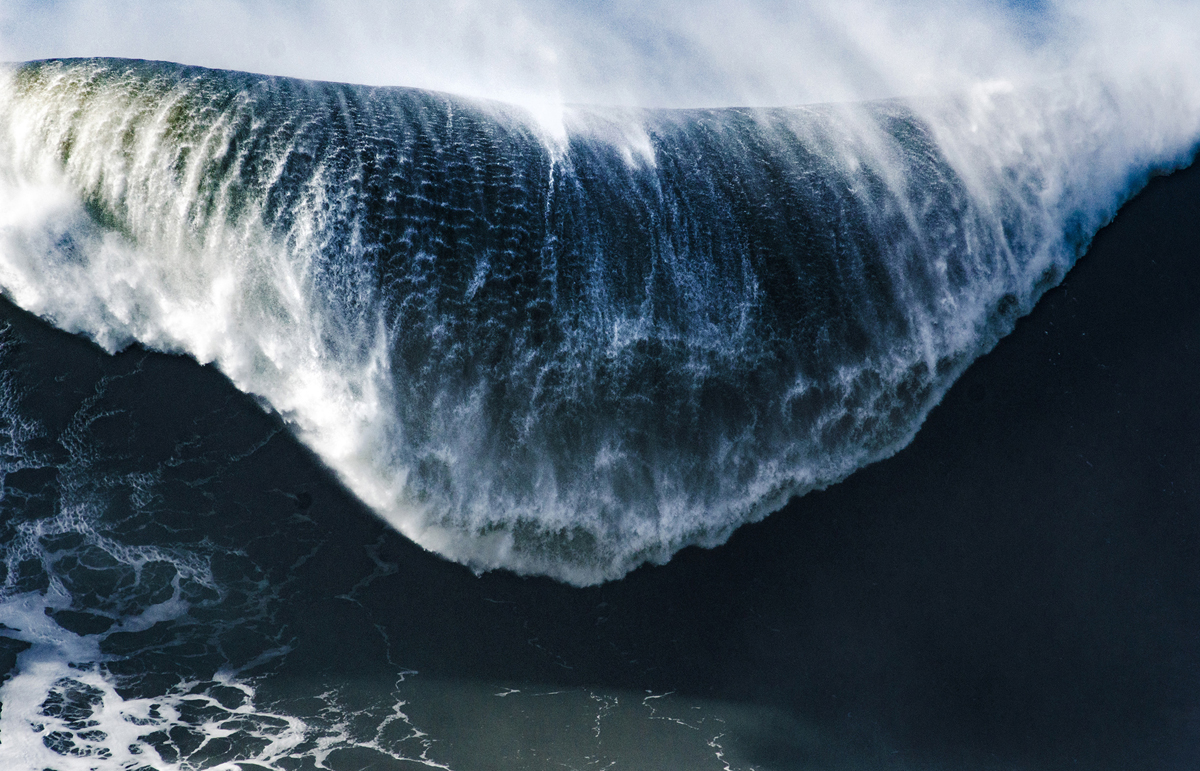 The thunderous sound of lips landing on big days can reportedly be heard for miles around. 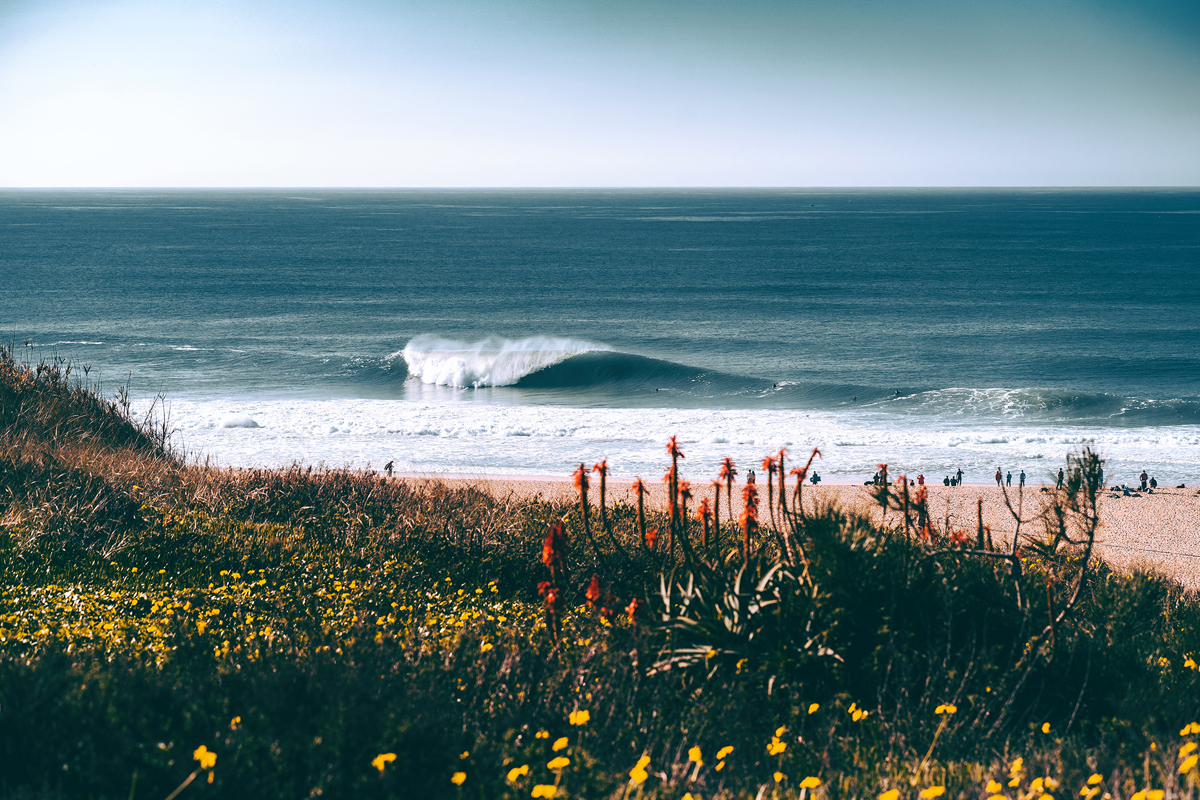 While many would jump at the chance to own a property overlooking Praia Do Norte, the sand dunes that back the beach have been left to blossom largely uninterrupted.

António Macedo paddles over the shoulder as a wedge gathers pace. 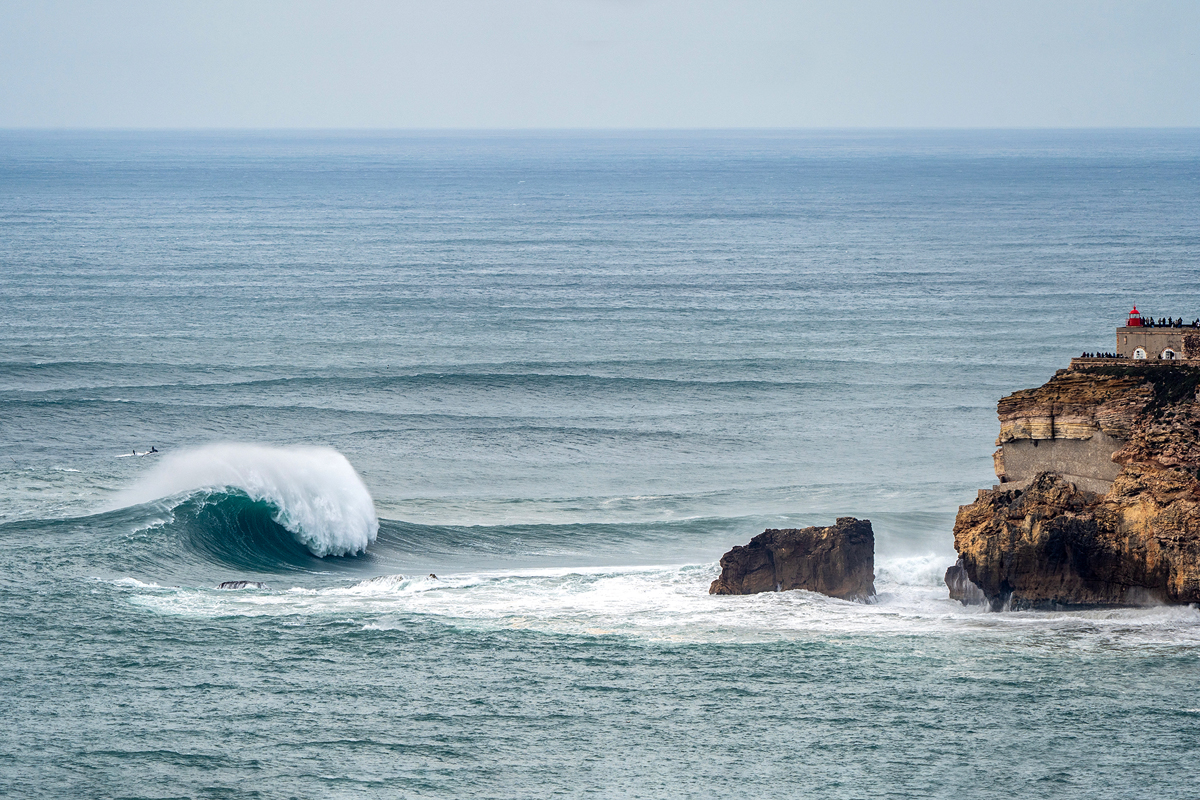 An alternative view, looking across from the town, offers some perspective on both wave and headland height. 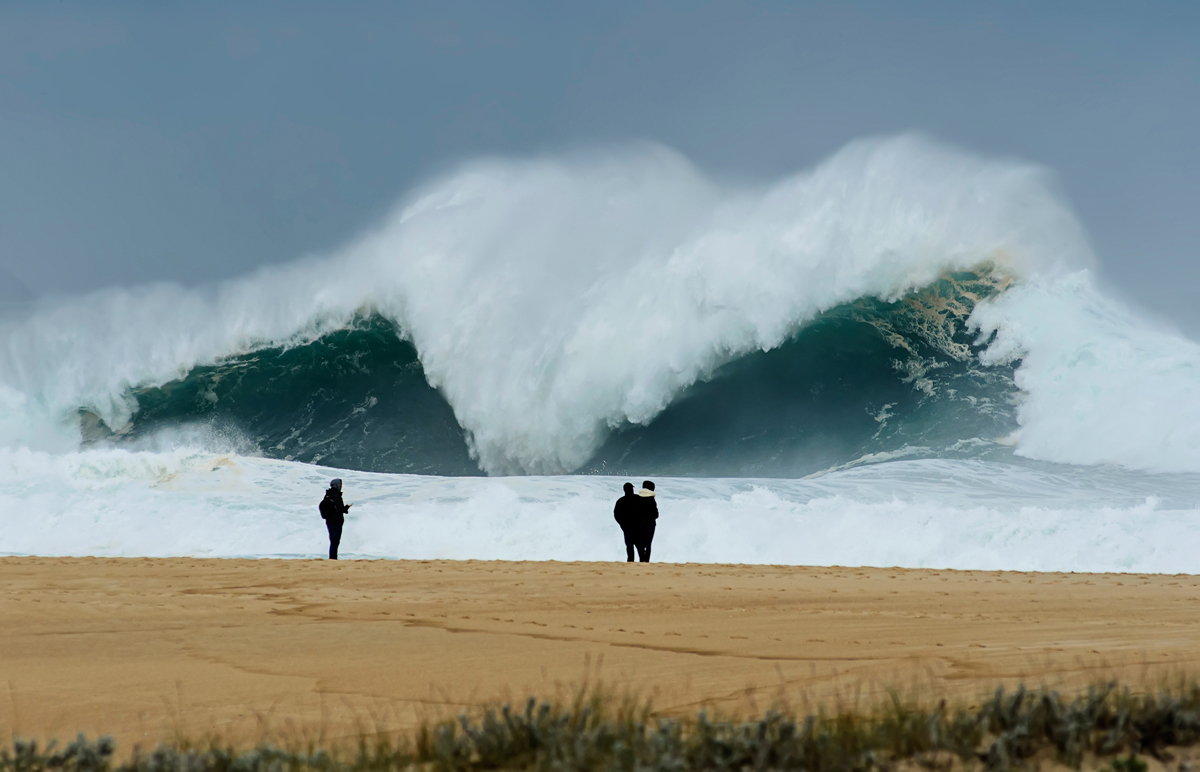 Onlookers observe a wild day at the biggest wave in the world.

Britain ain't well known globally for our world class waves of consequence. But, when everything

Britain is known for many things. Tea. Our darling Queen. Queueing. But definitely not world class waves of consequence. Sure, the surf world’s been vaguely aware of Scotland’s slabs for a few [...]

GALLERY: Inviting Lineups From Around Galicia

For many travelling surfers, Spain’s north coast begins and ends with the Basque country. While those with a bit more time on their hands may keep heading west, past Santander and into the depths [...]

A collection of lineups from a Spring mission into the wilds of New Zealand's South Island...

The New Zealand we know is merely the very tip of a mostly submerged continent. Millions of years of tectonic activity have forced it up above the sea, forming two intriguing slithers of land [...]