How Did I Get Here? – The Life & Art Of Christa Funk

Christa Funk is laughing as she tells me about her first foray into the notorious breaks of Oahu, where a close friend took her body surfing at the infamously unfriendly Sandy Beach. “That’s a break for breaking your neck, haha! I think he figured with some of the stuff he’d seen me do surfing elsewhere, like I’d just be on the worst spot on the reef, taking things on the head…I think he thought, Christa can handle this, she’ll be fine!”

Six years on and Christa has captured some of Hawaii’s most infamous water people in action, getting up close at waves like Pipeline and Jaws and heading down into the depths with iconic freedivers including Kimi Werner and Hank Gaskell. 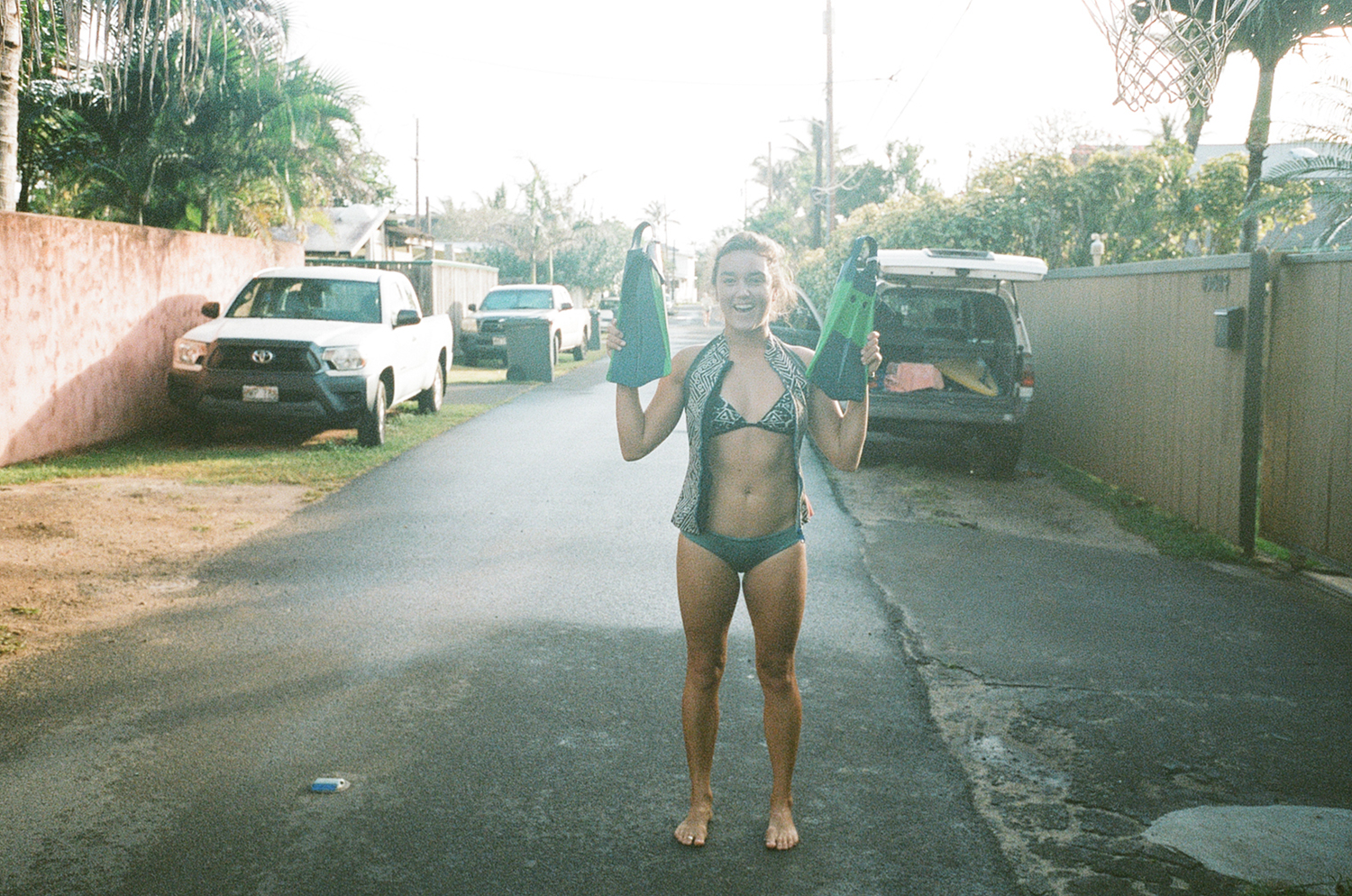 You would be forgiven for thinking that Christa is a born and bred Hawaiian.  In fact, she grew up in Grand Junction, Colorado and didn’t arrive on the islands until aged 22, after a serendipitous series of life events led her west across the Pacific and to a full time career in photography. It began with an early introduction to photography in an 8th grade computer class by an influential teacher (“she loaned me her Canon Eos Elan II and it just started the whole journey into photography for me”) and long stints serving in the US Coast Guard where she went through some of the “best and worst” experiences of her life.

Growing up with a close family unit including 2 older sisters, Christa wasn’t actually introduced to surfing until her arrival in Hawaii, however an affinity with water figured prominently from a young age, including a long competitive swimming career. “I told my parents I wanted to be a marine biologist when I was growing up,” Christa remembers, “and my dad showed me a website and it had the earnings for a PHD marine biologist, it was the same as someone who works at McDonald’s. He said you might want to change your path, haha. I changed it to appease him over the years, but it really almost just stayed the same”.

Off the back of parents encouragement, at age 18, Christa applied for a military academy rather than an art school. After 4 years, which she describes as ‘rigorous’ and ‘full-on,’ she achieved her marine biology degree and requested to be stationed on Oahu for the 5 years of mandatory active duty in the Coast Guard, which included living on a 378 foot cutter for 2 years on patrol. 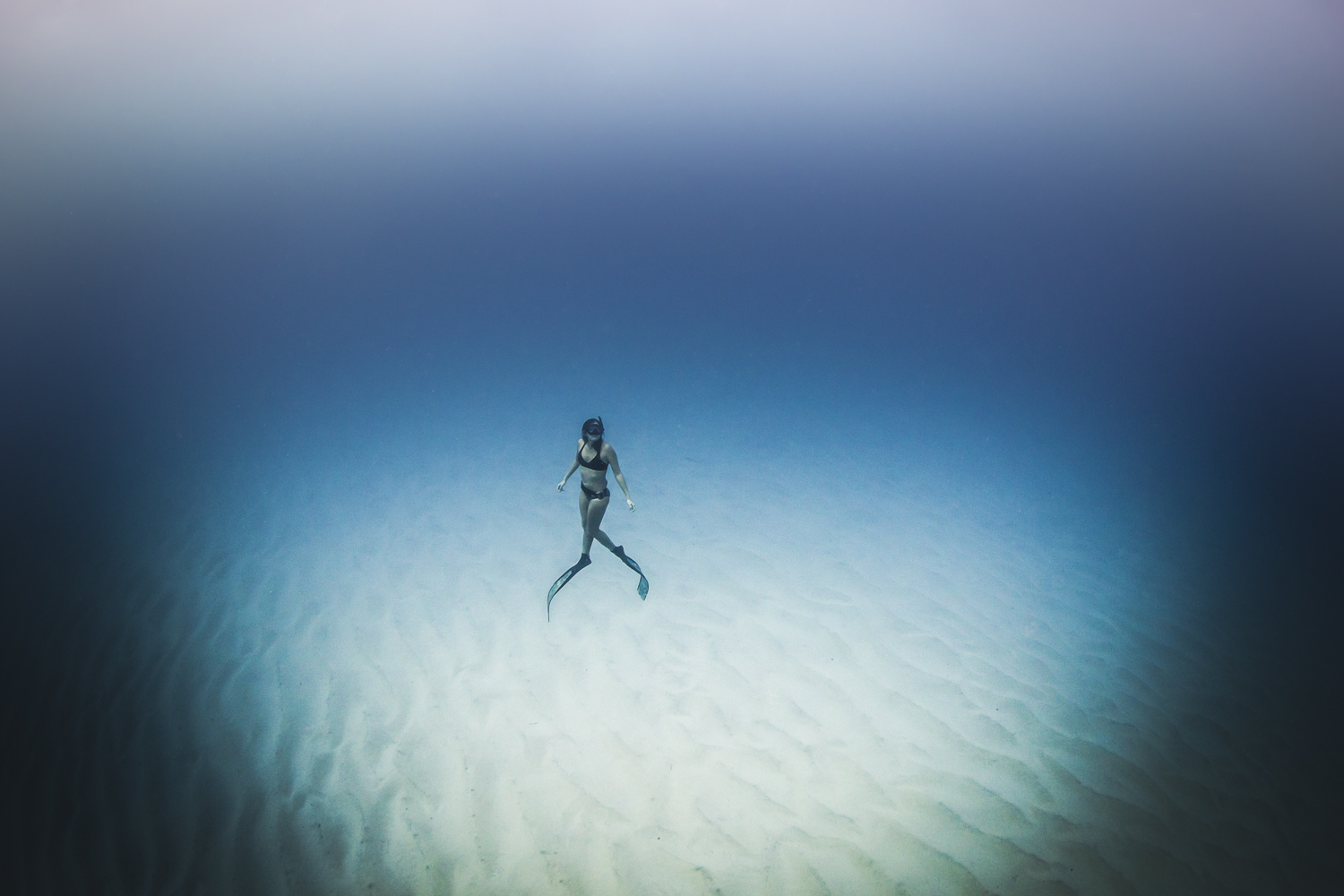 It’s clear that memories of those years encompass both hugely positive and extremely negative experiences and that both ends of the spectrum proved instrumental in her path towards water photography.  “I don’t know how ready I am to talk about everything yet”, she told me, regarding her experiences. “I met some fantastic people…The people that I know that would have my back if absolutely anything happened…it had a really significant impact on my life and my work ethic that I am very grateful for.”  Surprisingly, she tells me she thrived upon the pressures of working for the Coast Guard: “my first assignment I was a deck watch officer. You are responsible for the safety and well-being of everyone on board. It was a big responsibility, and you would really get used to it and feel almost comfortable, and that always freaks me out because I don’t ever want to feel “comfortable”. If I felt just a little bit comfortable, then I wouldn’t be on point if anything happened. I did enjoy that job a lot and I loved the ocean. I just thought it was this wild thing…I really enjoyed it as I got to be in the water all the time”.

Though she relished many parts of it, she also tells me about “the bad with the good”.

“I met some horrible people, but you get awful people in every industry…I think that the biggest thing that you can learn from bad experiences is when you get knocked on your back, how to get back up again and move forward even if something really terrible has happened. How to put one foot in front of the other. That’s something that I learnt, and even though what caused me to learn it I wouldn’t wish on anyone, it was something I wouldn’t necessarily change, because I wouldn’t be the person that I am now.  I am so glad I got to serve my country, I love America, I am a big fan.”

Eventually, an introduction to surfing made it an important part of her life, “it was a different way to be in the ocean all the time, and a good reason to get in the water every day and I loved that. When I’d have time off i’d take my camera out and shoot photos.  My friend saw me doing that and suggested I look into water photography.”

Photography quickly became a release. “I get the same release with surfing, so having surfing as an outlet, and eventually, water photography, was so huge for me. Just having something that was MINE, that I felt I had control over. I controlled when I went out into the water and went to shoot. It wasn’t anybody else’s choice. That became something that I really held on to, and surfing and shooting, they are breaks from everything that’s going on land. You go back on land, and you can keep moving forward and you can keep doing everything else in your life. Because you’ve had that release.” 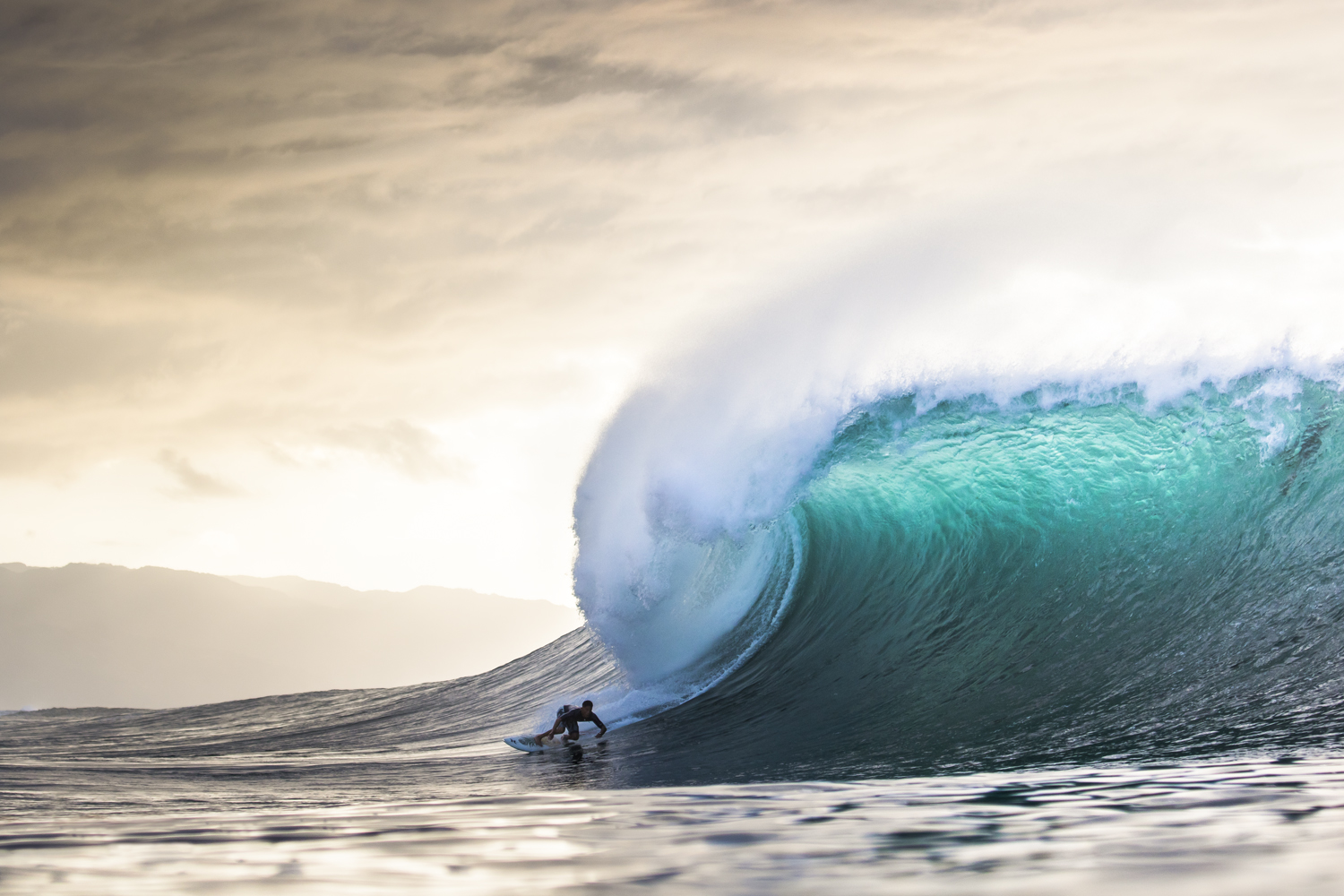 Her experiences in the harsh environment of the Coast Guard undoubtedly played a powerful part in preparing Christa for her work as a photographer shooting in some of the world’s most extreme ocean settings.

“Just going out to Pipeline where it’s a male dominated environment, it wasn’t such a huge shift for me. Even some of the more senior photographers and senior guys, when they were standoffish, it was the same with people who had been in the Coast Guard longer than I had been, how people treated me initially and how a lot of guys treat you. So it was something that wasn’t a big intimidation factor. “

Immersing herself into the local scene, she “ended up talking up to a photographer, Kenji Croman…he took me out for my first session at Pipe. He showed me how to get in… Having the knowledge that I could swim in if my leash broke gave me confidence…Everything came together in a really perfect way that I couldn’t have ever really imagined.” An induction with Kenji formed a series of powerful connections to OG Hawaiian legends who shared sacred and often closely guarded knowledge with Christa.

“I started consistently shooting with Flynn Novak. He opened up and started talking more about Pipe. It’s just a thing where you don’t hand off information for free. It took you so many years to figure some of those things out! I  built a rapport and friendship. That was so incredibly helpful, listening to OG’s talk about Pipe and what’s going on, asking questions, and listening to lifeguards too, kind of absorbing their stories and experiences.” 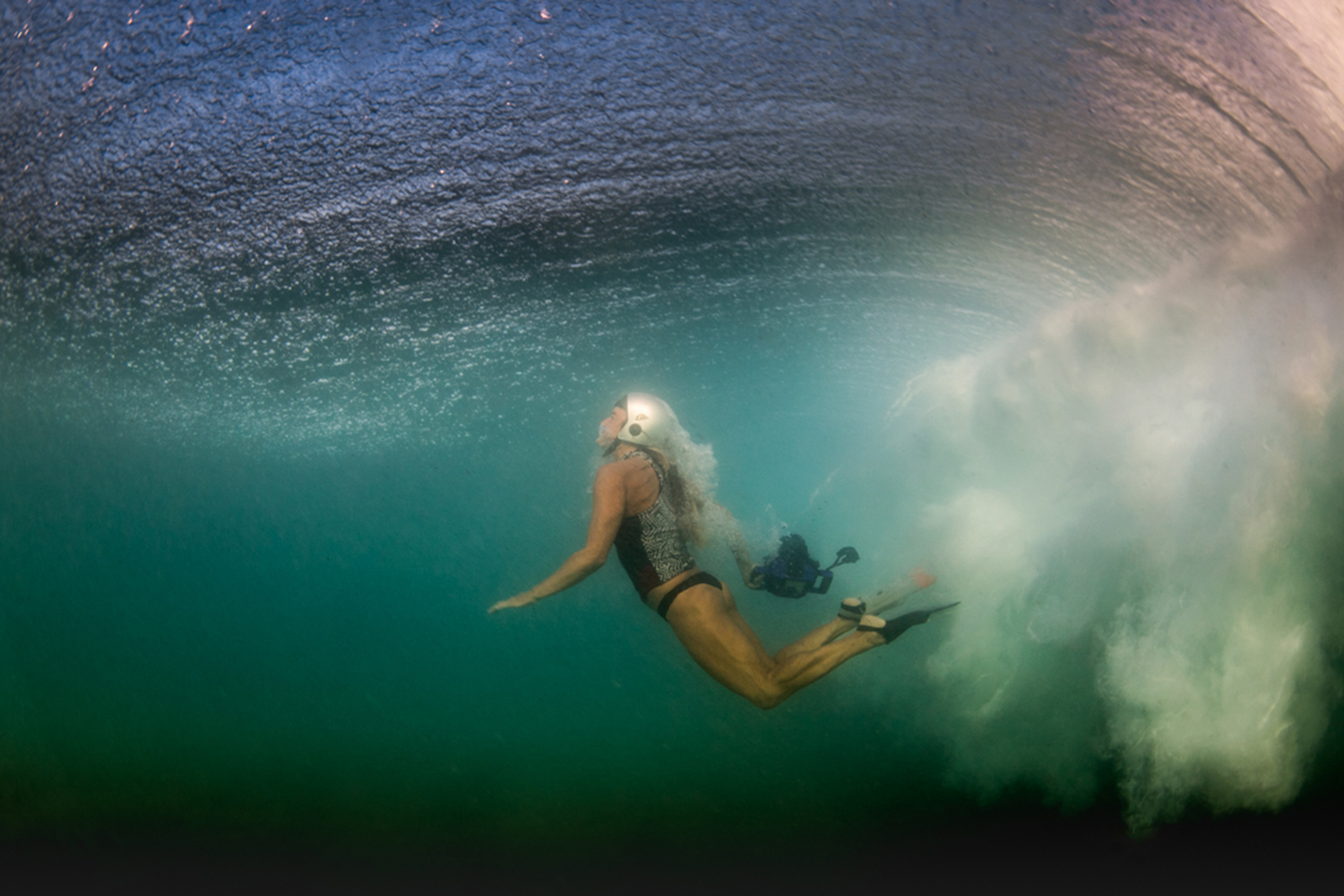 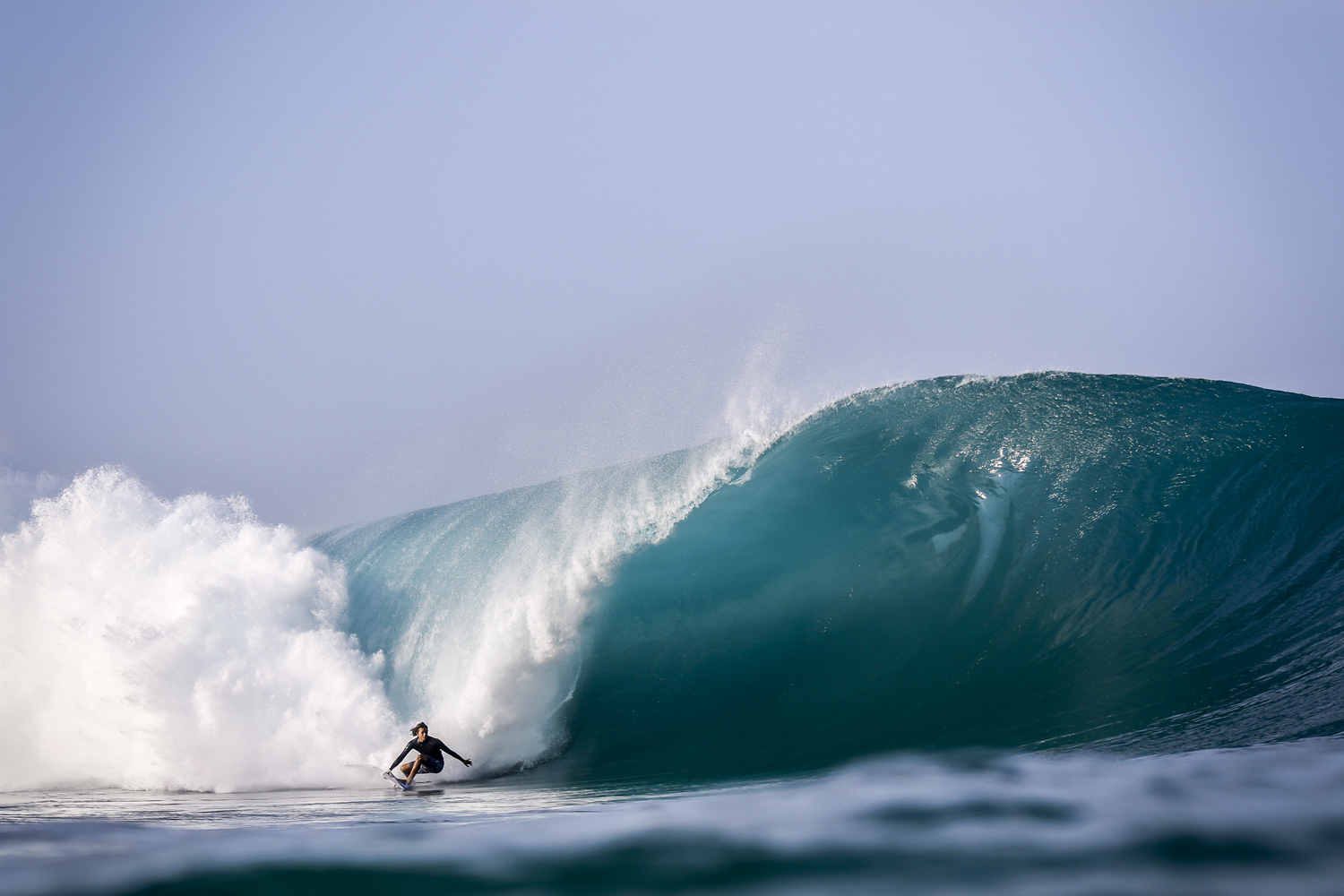 “The first time I went out to shoot Pipeline I had full body chills. It was that same feeling I got when I started surfing, in that I thought oh gosh…this is going to change things”.

“You’ll be in waves that are doubling up and that are square, and they are going to land on you! I love it, and I love seeing what the ocean can do…Shooting Jaws and swimming at Jaws was just like…oh my gosh. That was another one that got me. Full body chills.  Massive walls of mother nature, heaving gallons upon gallons of water, it was absolutely magnificent and seeing people involved with that intensity, was something that I really enjoyed being around.” 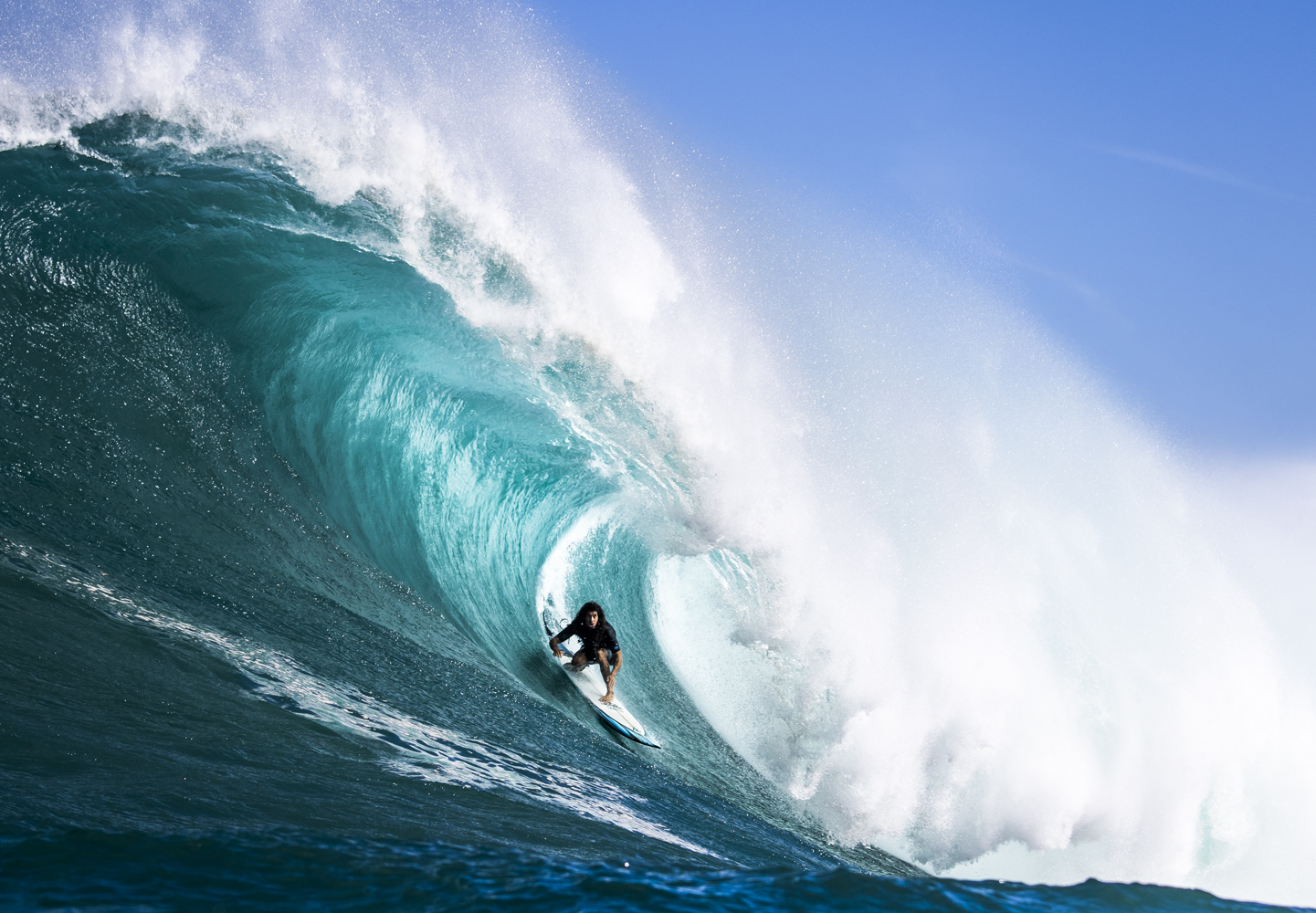 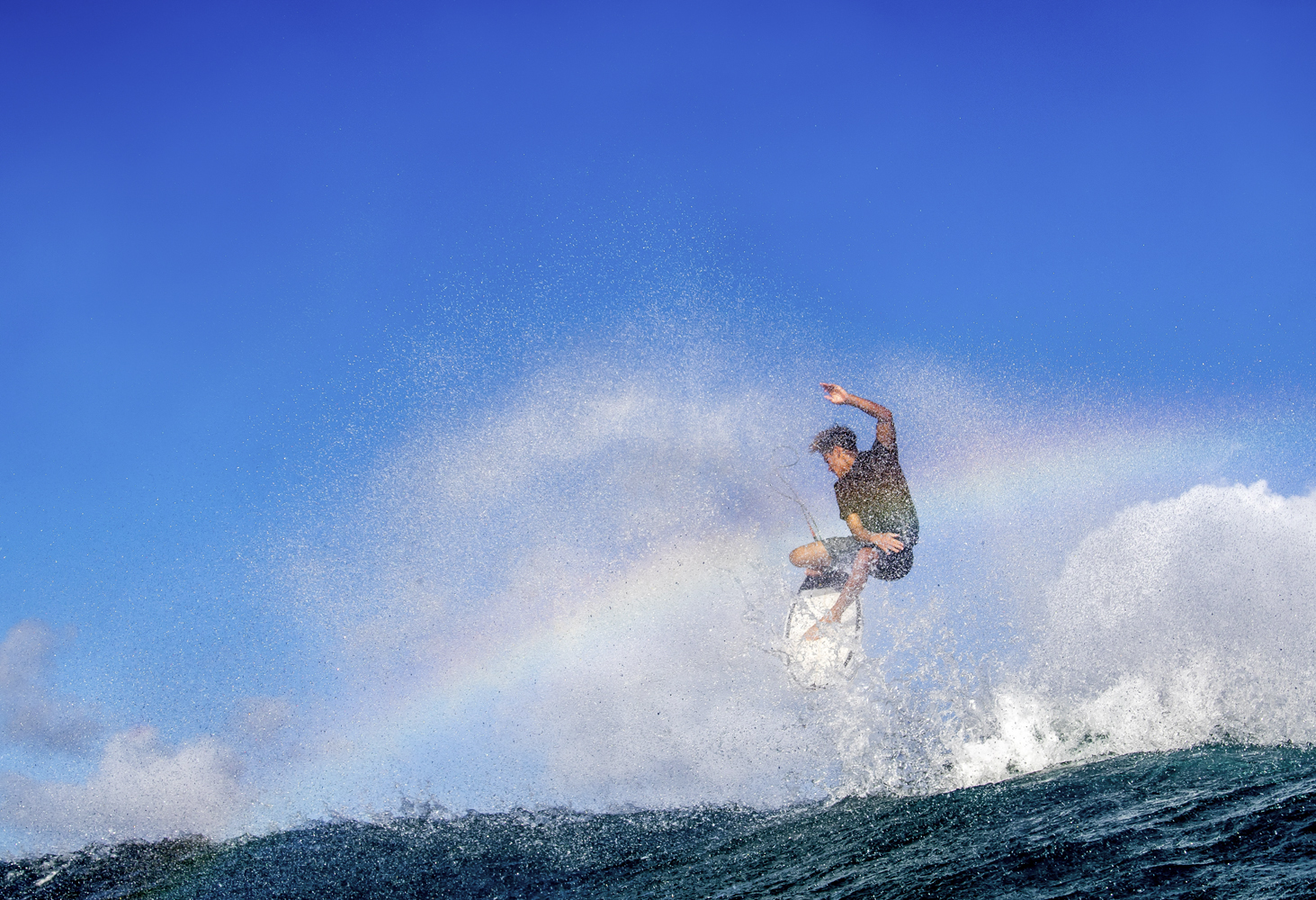 Beyond these powerful experiences from her formative years, there’s an image from much more recently that sticks out in Christa’ mind as a career highlight.

It features her husband, Jake DiPaola, with whom she was in a long distance relationship for a few years (“I don’t recommend it!”) before he came back home to Hawaii (where he was born) .

“This one has a lot of meaning,” she says. “My husband grew up on Maui, but when he joined the Coast Guard he left for basically 17 years. He got the wave of his life. He gets this wave, and it’s this late drop, and he fricking comes off the bottom and barely makes it under the lip. He gets under the lip and the thing spits once, and I thought he might get knocked off his board, but then it spits again and he comes flying out. And he’s flying out, he’s soul arched, and just hooting and every bit of joy, and emotion after waiting for that wave for 30 years, it came together for him. I have this shot of him coming out of that barrel, with a ton of spray, and the flair was in the right spot, and holy gosh, and he has SO much joy and there’s so much emotion to it. Even if it wasn’t my husband, that would still be one of my reasons why I love to shoot. Because you get those moments, and you don’t get them all the time. But if you get them, it’s the coolest feeling. An amazing feeling. Emotion on top of emotion on top of emotion. And it’s just so good.” 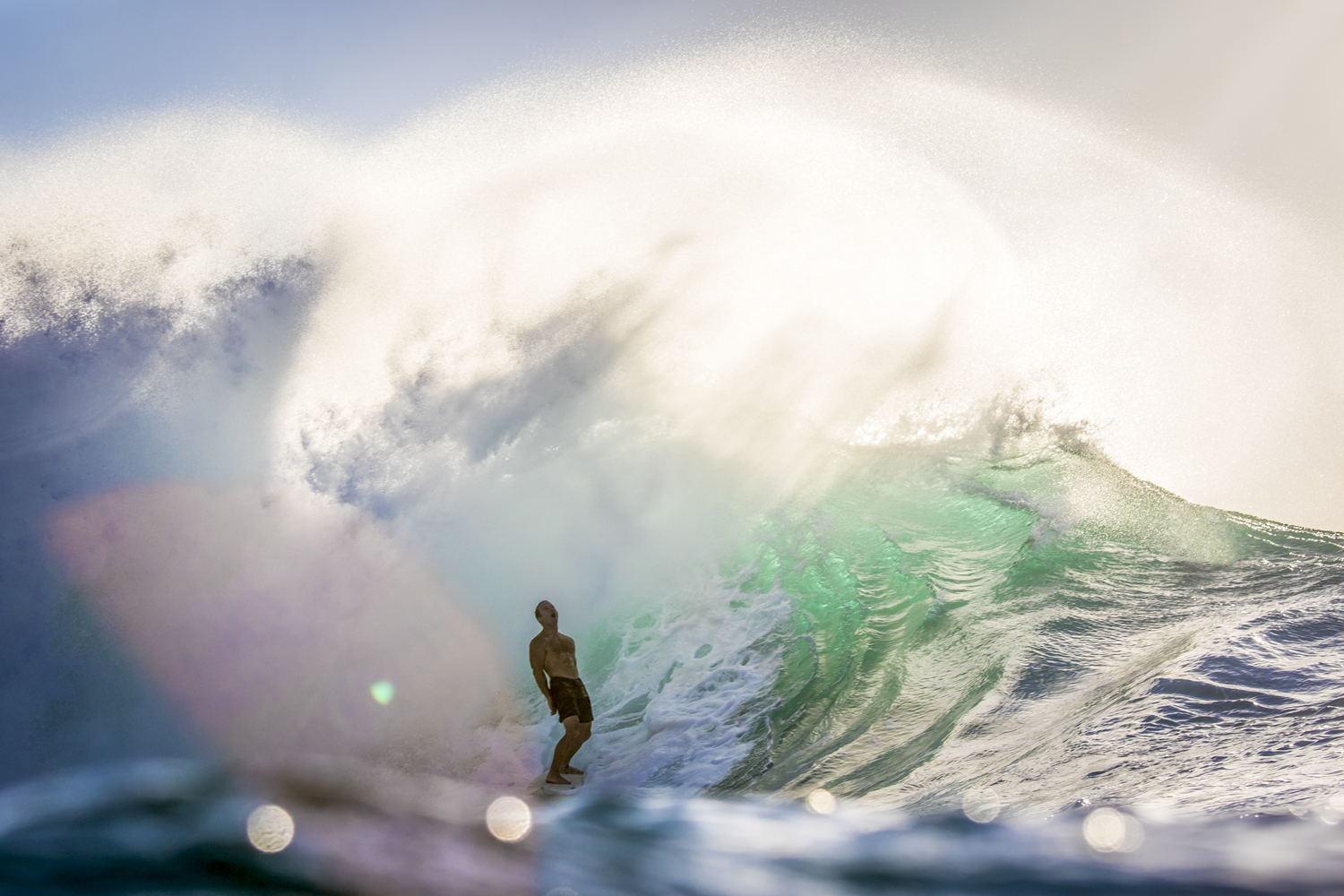 Next up in our series shining a light on awesome women’s surf communities around the globe, we’re paying a visit to the cold water Mecca of Tofino, Canada’s surf capital catch up with local [...]

At just 24 years old, Karina Rozunko has already carved out a coveted spot in the world of traditional longboarding, celebrated by her contemporaries for her uninhibited free-flowing approach and [...]