Next up in our series shining a light on awesome women’s surf communities around the globe, we’re paying a visit to the cold water Mecca of Tofino, Canada’s surf capital catch up with local surfing supernova Hanna Scott.

Tofino has gone through a considerable metamorphosis from its inception as a hardy fishing and logging hub to the tourist adored, year-round surf town it exists as today.

Located on the western edge of Vancouver Island, it receives consistent storm swells from the North Pacific which roll into its sandy beaches and rocky coves, breaking against unparalleled snowy mountain vistas. And with primordial rainforests, rich fauna and atypical crystalline Canadian lakes to sweeten the deal, it’s no wonder the area has been drawing surfers in since the early ’60s. 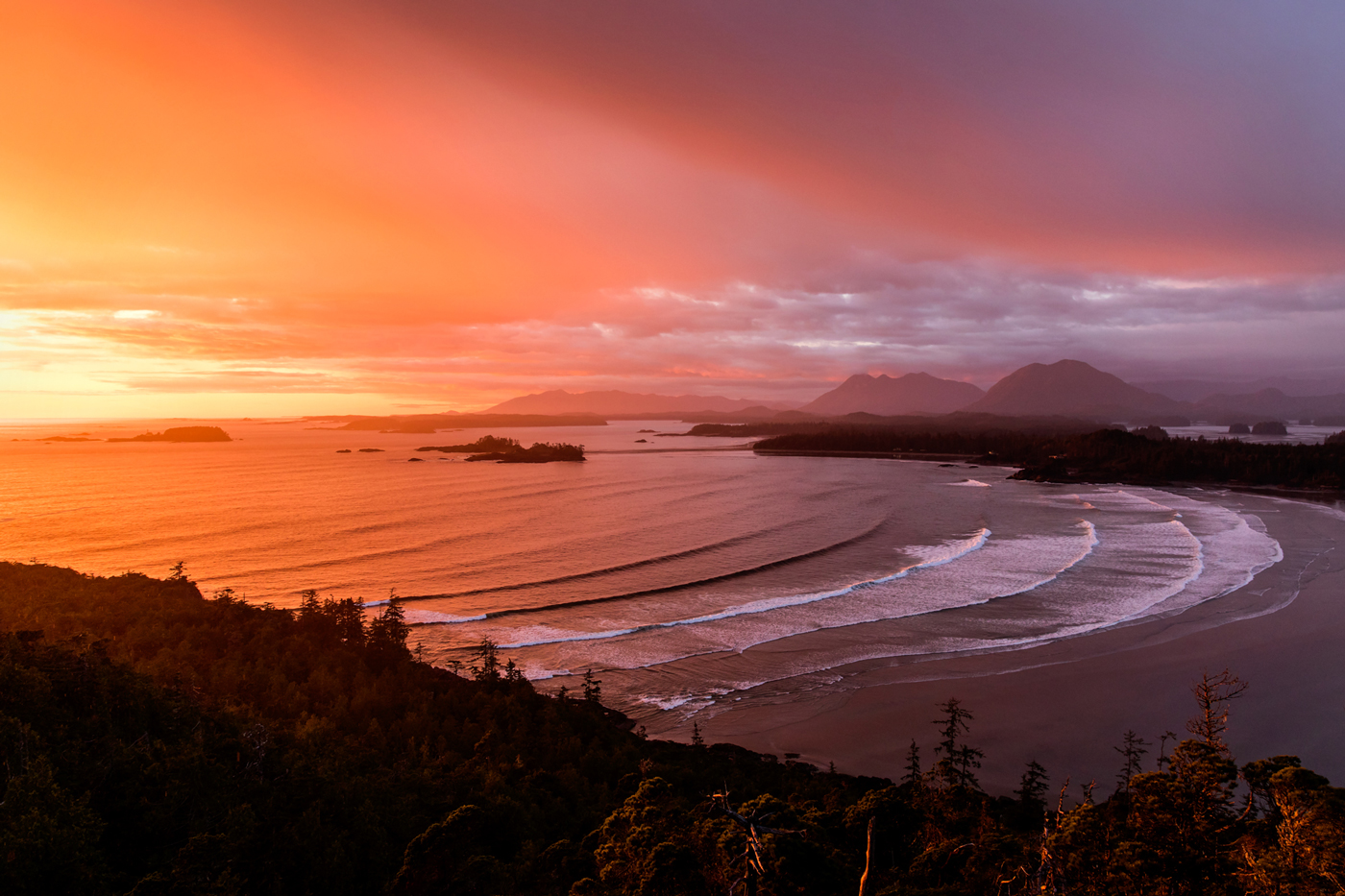 More recently, with the foundation of an all-female surf school, Surf Sister (1999), and the Queen of the Peak competition (2000), the burgeoning community of female surfers swelled and today, Tofino is home to a strong community of dexterous female shredders, including Vans sponsored Hanna Scott. Scott, a Victoria born surfer who has been living in Tofino for for the last 10 years, is both a champion longboarder and shortboarder. Recently, we caught up with her to tell us about the unique magic of surfing in Tofino and the community of female surfers that make it home.

“I really enjoy doing all kinds of surfing. I like surfing whatever board the wave calls for. I surf longboards when it’s good for longboarding, and I surf shortboards when it’s good for shortboarding. I learned how to surf in Canada. There are waves on the southern end of the island where I grew up, so I would go there whenever I could, but I was able to surf more and learn a lot more once I moved to Tofino around 10 years ago. I think what makes it unique out here is the rawness. There is a lot of natural wildlife, and we are super exposed to the Pacific Ocean and all of her glory and storms. Our coldest times are not really that cold compared to the East Coast, our water in winter is around 7 Celsius. But it just feels quite cold because it’s so damp and raining constantly, it’s hard to dry out and warm up, ever. 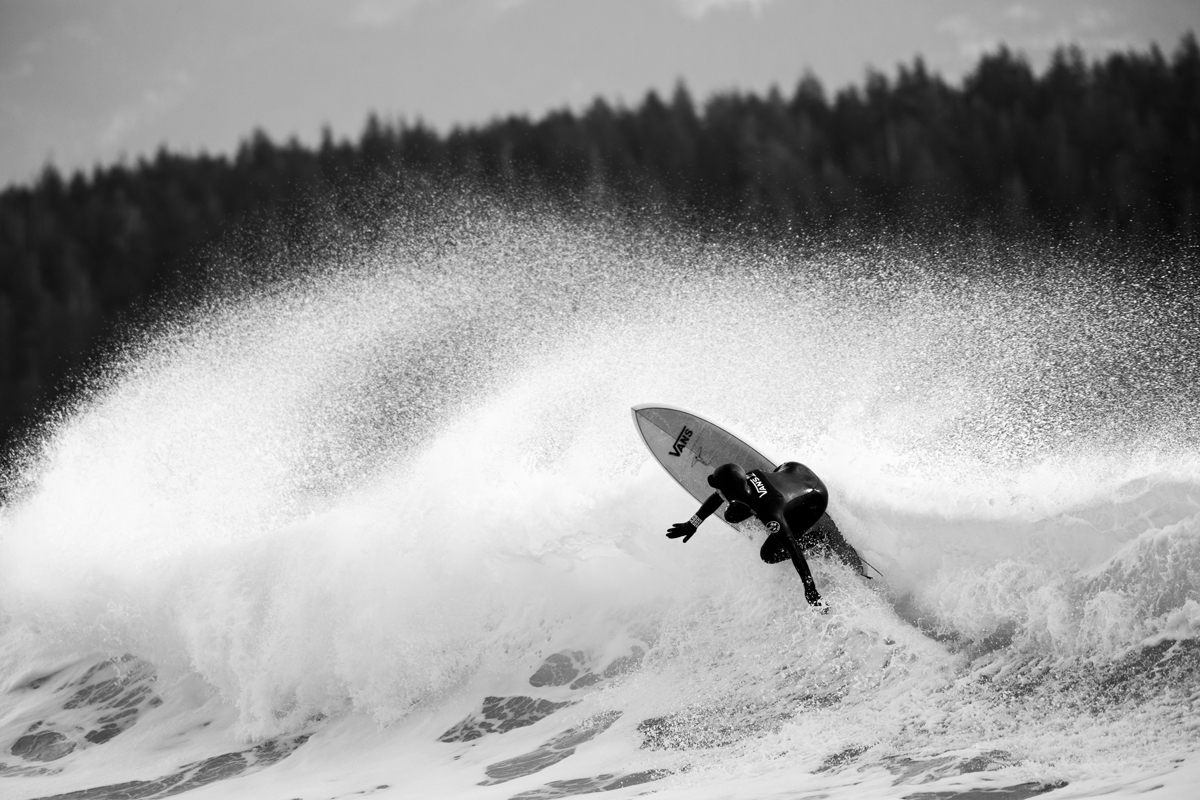 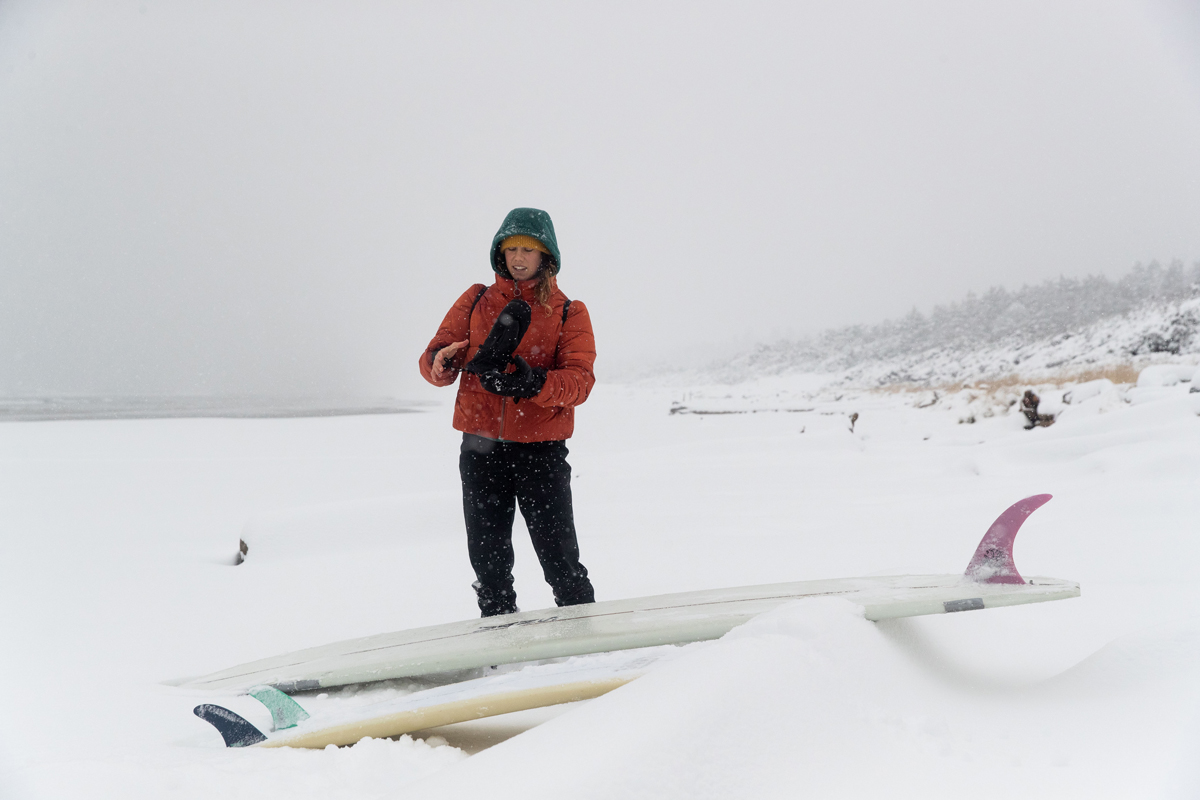 I live right in Tofino town, the beaches are all about a 4 minute drive (one song and a bit) to get to from my house. North Chesterman is the closest consistent beach from town, it’s probably our steepest beach so it can be somewhat punchy and exciting at times. Cox Bay is our most exposed beach so even if it’s super tiny, there will always be a little wave there. All of the beaches get fun on their day, and certain little areas on each beach have their own thing going for them, but we have enormous tides here, similar to Cornwall, and any little sandbar that is fun for a moment, you can guarantee will disappear quickly as the tide changes. My favourite beach I think is Long Beach, it’s in the middle between Tofino and Ucluelet and I like it because there is a ton of space there so you can usually find your own little peak.

Surfing during the pandemic in BC has been okay.  Challenging at times, but it’s just been something that we’ve all gotten used to in one way or another. It was interesting at the start because our town was completely empty for a few months. It was really beautiful here, super quiet and like how winter used to be when I first moved here. Then the parks eventually opened back up and Canada’s domestic regulations loosened a bit, but since international travel was still not permitted, it seemed like the entire country chose Tofino as a summer destination. It was extraordinarily busy here this summer, but it’s all good, I’m happy that people got to come and see the beauty of this place and experience a little bit of nature, especially people that were stuck in city apartments for the first few months of the pandemic. The surf can fire actually at any month in BC. In the summer months we can get some amazing south swells. But winter is definitely more consistent for bigger west swells that light up the whole island. 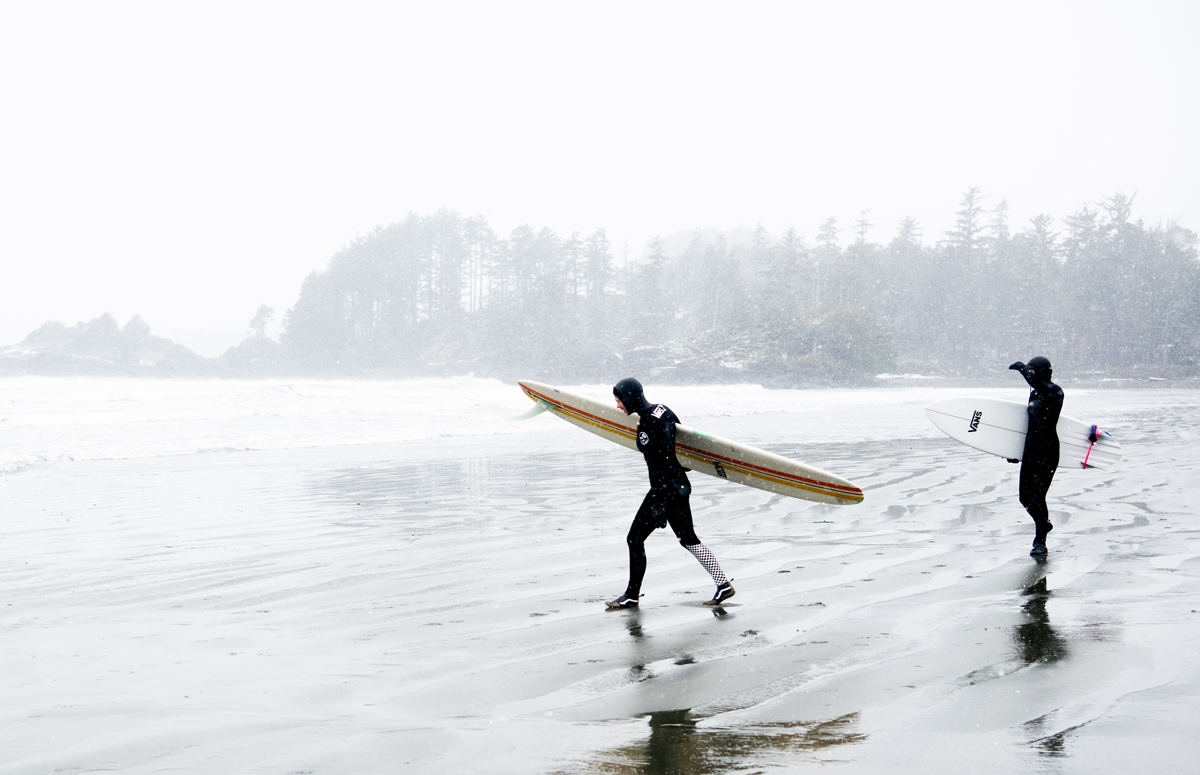 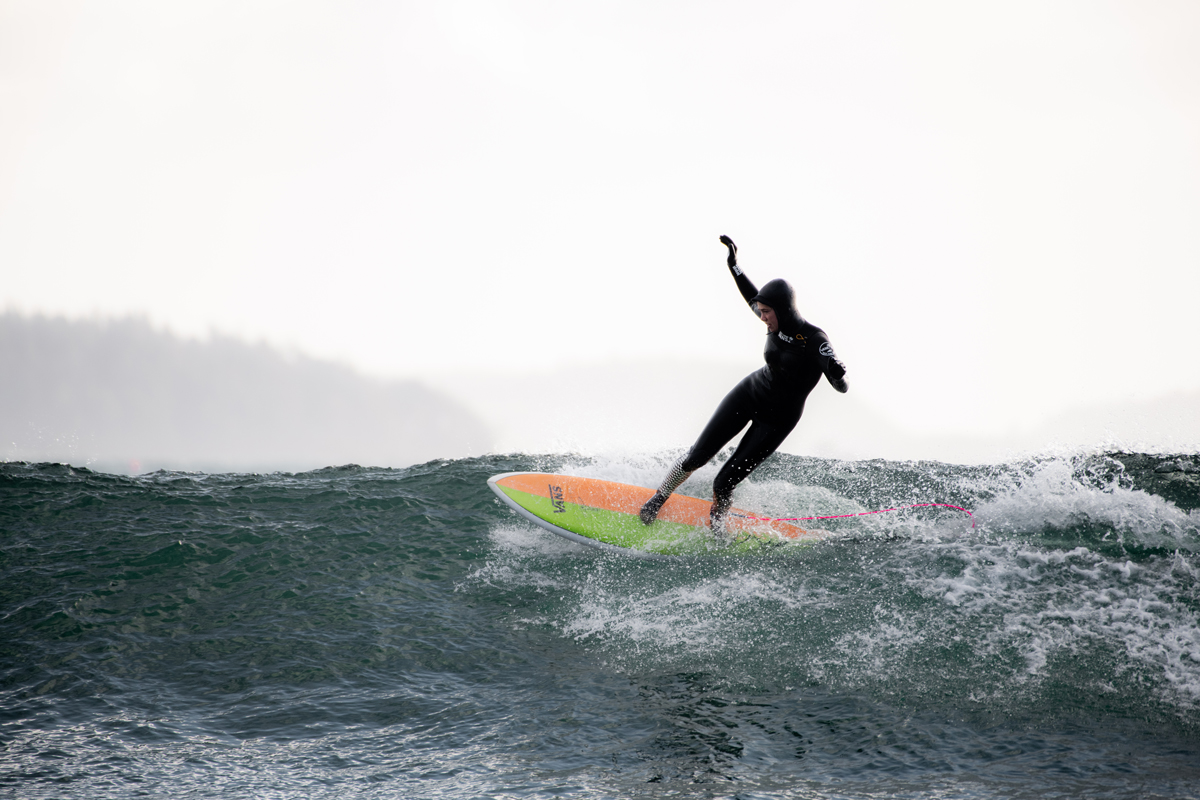 Surf culture in Tofino town is pretty cool. There are a lot of really amazing people here. And everybody is doing whatever they need to do in order to live here. Like you never know, your barista might actually have a major in civil engineering. Stuff like that is quite common. There are a lot of really creative people, a lot of artists and musicians. Also a lot of people making beautiful ceramics. People are supportive here, it seems like people are cheering for each other’s creativity endeavours. It’s cool. Especially because more and more people are able to call Tofino a  permanent home. I feel like there was more of a little art and music scene popping up here, at least before the pandemic. Things are very low key now!

The surf culture in BC is growing. There are definitely a lot more people surfing now than even just 5 years ago. When I first moved to Tofino I didn’t really know any surfers that were younger than me (18) surfing,  but now there is this whole crop of kids coming up that absolutely shred.  Lots of young females too, it’s been super exciting to watch them grow into teenagers and continue to evolve in their surfing. Tofino has a lot of lady surfers. A lot. I definitely feel lucky to know so many awesome cold water women, some places don’t have this. I feel like it flows and changes, but my female friends at home that I surf the most with are probably Lydia, Alle, Ceri, Sanoa, and Mathea. Honestly, I’m pretty scattered at making plans to surf with friends, we usually have a thread going about where the waves are good and what time we are planning to go, but even if we don’t, you’ll always find a friendly face, or 12, in the lineup. There are probably about 300 surfer girls in Tofino, or more even! There is a group called Surf Sister Surf Club. I think it’s a really beautiful community of girls getting together and giving each other tips and things like that. I think it’s nice for girls to go join up with that crew just to feel more comfortable and confident getting into something new.  Surf Sister is really great. They are the surf school I worked for when I first moved here, and the owner, Krissy,biggest legend ever, is the one who started the Queen of the Peak, which has resulted in so many younger girls in this town getting into surfing. Because of QOP they all started 10 years ago when they were like 6 and 8 and then they just continued to get better and better since then. Before QOP, there were no contests that made the women feel welcomed or taken seriously. It’s been a pretty amazing evolution to watch. 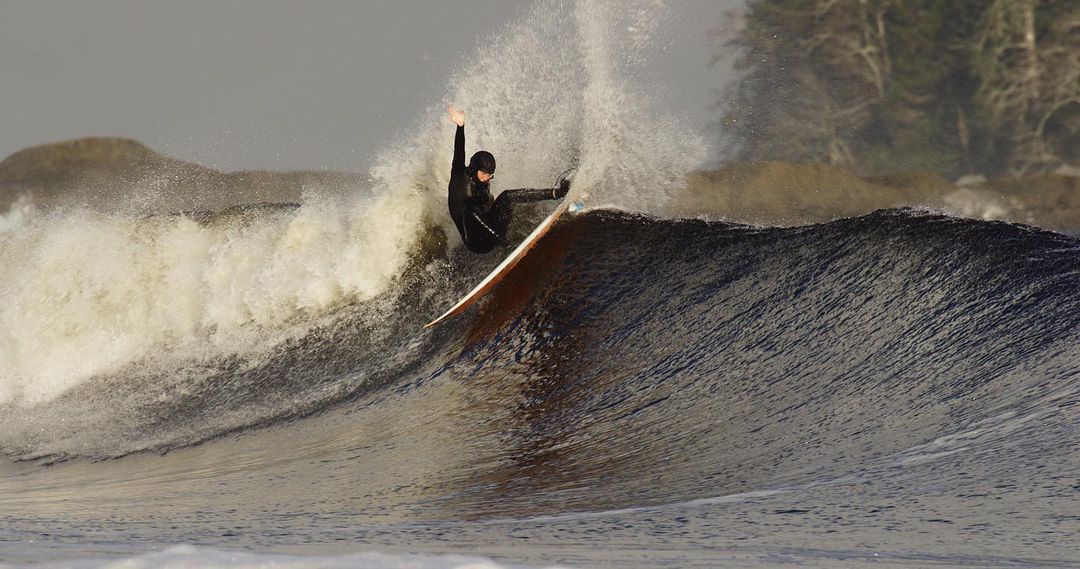 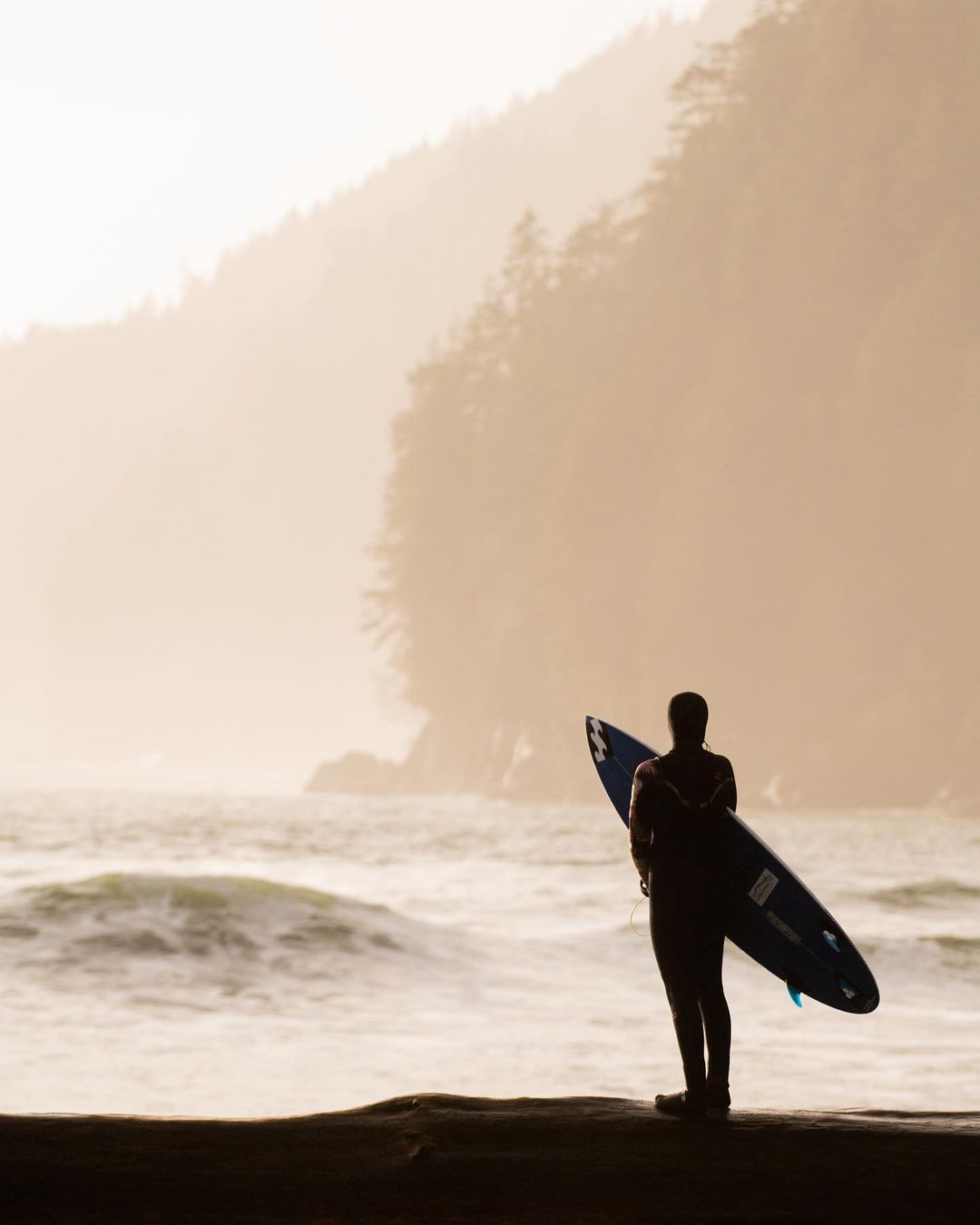 For shortboarding, my favourite local surfer is Sanoa Olin. She’s 15 and she’s an absolute firecracker goofy-footer. She goes so hard into every section, and she’s got sick style, it just gets me so stoked to surf!! And she goes so vert on every backhand turn, she is legit gnarly. My favourite longboarder is Lydia Ricard. Her style is graceful and calm, and also quite critical. I get so psyched surfing with Lydia. She has only been surfing for a few years, but she picked it up super quick with dedication and she truly rips.

I had a really special session the other day. It was one of those days where you go to bed excited/nervous and don’t sleep well because you’re imagining that the swell tomorrow is going to be huge and perfect. We got up at 5am and did the long drive and then the hike that it takes to get to this spot only to discover it was classically lacklustre and small ( this happens a lot here as it is very particular with direction). So we surfed a bit and then took naps on the beach for a while waiting for something to change.

Then we decided to just walk back to the truck and head home. On our walk back we found that this log wave was breaking perfectly and decided to go out even though we were exhausted from the early start and the whole day so far. The wave ended up providing exceptionally enjoyable moments for hours and hours with only 4 of us out, and there were these crazy seagull and eagle tornadoes happening out on the water in the distance which must have been caused by a whale pushing up a bait ball to the surface and the birds were just going nuts. There had to be over a thousand birds in the sky between the two tornados of birds. I was thinking if I had seen the movie The Birds that I would be scared of that moment, but I haven’t, so it was really cool to watch. We also saw whales earlier that day in the line up at the other spot, so it was one of those awe-inspiring nature days haha. But the most memorable thing of the day was just how it turned out so sick after having way too high of hopes for the first spot (logs for the win, always haha).”

Today we’re kicking off a brand new series on Wavelength, shining a light on some of the most unique and colourful women’s surf crews around the world.  We’ll be checking in with the [...]

At just 24 years old, Karina Rozunko has already carved out a coveted spot in the world of traditional longboarding, celebrated by her contemporaries for her uninhibited free-flowing approach and [...]