Post Portugal: What We Learned  The greatest priority incident in history saves middling-to-average Supers (and surfing) from itself

I hadn’t been to Peniche for a few years before attending this year’s Championship Tour event. While I’ve been a regular visitor to Portugal, that particular waft of cabbage field offshore across a kinda bleak, vaguely dystopian Peniche skyline, married with an outrageous richesse of nearby surf opportunity had all become unfamiliar to me.

It didn’t take long to get reacquainted.

While the event, held entirely at relatively swell sheltered Supertubos suffered from a lack of epic, the waves were actually real fun on the more exposed north side, and pumped between head high to too big on the lay days.

Elsewhere, for an assortment of decorated international chargers there were Nazare tow and paddle days, even a Cave session.

While the beach crowds were maybe a touch down on what I’d remembered/been lead to believe, the surf school/camp business is absolutely thriving, in no small part down the continued success of this event.

Overall, rather than throw up life-changing discoveries, the 2019 Meo Rip Curl Pro reaffirmed what we kinda already suspected. It was very much of our time: confirmation bias wrapped in echo chamber.

In terms of free surfs, particularly the chance of scoring decent waves with light crowds, nothing compares to the number and variety of waves on offer, in Europe, and possibly anywhere else on tour.

In terms of give a fark factor, thank deus Medina isn’t injured, because without both him and John, the Tour is basically different dudes surfing real well, and the closest we get to plot or narrative is an Instastory of someone with sleeve tatts bleaching their hair. 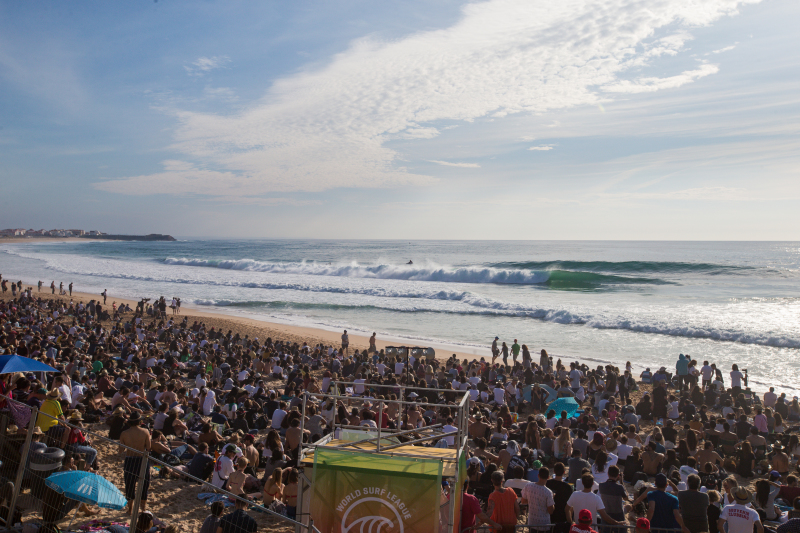 Peniche sure was pretty, if not life-changing.  Photo: Masurel/WSL

Gabs Doesn’t Play to the Whistle, Title Goes to the Wire

‘The first rule of sport’ Mr Slatcher would bark at us, shivering in a windswept bog masquerading as a school playing field, ‘Is play to the whistle’. The ever unpopular Slatcher was referring to us claiming fouls or handballs in PE and, Di Canio catching the ball at Goodison aside, he had a point.

By making his own call on priority, the reigning World Champ somehow managed to lose a heat he’d easily won. It’s not an easy thing to get wrong wither, not only is prio announced over the PA (on this occasion by beach commentator David Prescott), a LED display on the tower clearly identifies the situation.

Now, whether Medina’s error was a Type 1 false positive (erroneously believing he had prio) or a Type 2 false negative (erroneously not believing Ibelli had secured prio), either way he did us all a solid by making it that huge error.

Because aside from a glorious-ish final wiggle or two from Ferreira, there wasn’t a whole lot else to get excited about in what turned out to be a relatively unspectacular couple of weeks.

For Medina’s self-officiating presumptuousness, we are eternally grateful.

“Gabriel Medina is the most polarising surfer in history. Not just more than AI, but more than him, Flores, Bobby, Desouza, Laird, Da Wolf Pak, Ace Cool, etc, put together…”

Gabriel Medina is easily the most polarising figure in surf history. Not just more than AI, but more than him, Flores, Bobby, Desouza, Laird, Da Wolf Pak, Ace Cool, etc, put together.

For a variety of reasons, very very few surf fans are Medina indifferent.

At the venue where the global audience’s Medina misgivings famously crystallised with the Wilson final/ podium debacle in 2012, another very public blow up delighted a large portion of the fan world, and enraged a similarly large portion in equal measure.

The beauty of the Medina as pantomime villain spectacle is that he doesn’t need an obvious rival to bring out the worst in surf fans, say a Florence or Wilson counterpoint. He doesn’t require a blond Anglophone supposed goodie to play baddie to, Medina can get into it against an unfancied early onset balding journeyman from his own country, who did nothing other than paddle for a wave he had priority for.

Having Neymar Jr, probably the most disliked person in global football back him by cyber bullying Caio, well that didn’t go particularly well either. Cue intensified online bloodletting on both sides.

In the relatively near to mid-distant future, nobody will remember or particularly care who won this event (Italo Ferreira), while everyone will remember Prio-Gate.

“Surfing, a sport that loves an indiscernible goal post and an uncertain time frame even manages to get Olympic qualification down to a relative drip of indeterminate uneventfulness”

Olympics Watch: (Don’t) Wake Me Up When We Get To Tokyo

Competitive pro surfing, a sport that loves an indiscernible goal post and an uncertain time frame has even managed, over the past few months, to get Olympic qualification down to a relative drip of indeterminate uneventfulness.

Jeremy Flores, got 2nd last (equal 17th) at Supertubos, and qualified for the 2020 Olympics that day, which is so, so surfing.

You can picture the scene: young French grom, glued to his device beaming the broadcast from Peniche, having recently fallen in love with the sport forever via Flores epic victory in Hossegor:

“Has he won another contest?”

Elsewhere, the one compelling Tokyo storyline that continues to intrigue – particularly for those who base their fandom mainly around schadenfreude – is Florence vs Slater (and Moniz?) for that 2nd Team USA spot.

With Slater failing to advance his cause overly with a 9th at Peniche, he still languishes some 3000 points behind Florence. Which brings us nicely on to…

Thanks to Gabriel’s over-exuberance, the World Title goes down to Pipe, where he’ll need to do better than Italo Ferreira, who’ll surf Pipe in the yellow jersey. But who will hoist the 2019 World Title trophy isn’t the only question to be answered at the Banzai, the other being:

Is John Florence more than twice as good as Kelly Slater?

Because while Slater may be the Greatest Of All Time, he’s only the 10th greatest of right now.

John has only surfed half the season so far (5 events of 10) due to injury, and yet somehow still sits above Slater in the ratings.

Now tell me you’re not at all into the idea of a Florence Pipe comeback, in absolutely cranking surf, maybe not quite 100% recovered, surfing to try and deny Kelly the chance to bask in olympic glow.

I mean is it just me, or is it not that we particularly want to see John wiggle in Chiba, but that we kinda want to see John to deny Slater the chance to wiggle in Chiba, having toyed with him by being injured since May, taunting him with a #Tokyo2020 Insty post before Tahiti, before ultimately snaffling out Slater’s heroic olympic Swan song story by hobbling down his garden path and pulling into a few Pipe bombs in December.

Golf is onto something with its handicap system, a system where I could play Tiger and yet still win. John’s handicap has been not surfing for sixth months, thus making it kinda close between the two of them before an epic Pipe decider.