Home » A Trip To Taiwan; The Pacific’s Alternative Surf Destination

A Trip To Taiwan; The Pacific’s Alternative Surf Destination

Searching for surf and top-drawer snack food in Taiwan...

“Xièxie” I say to the smiley-eyed baker as she closes the condensation-filled cabinet and emerges from a cloud of vapour like a contestant on ‘Stars in their Eyes’.

She hands me a carrier bag bulging with a selection of the famous Taitung County Baozi buns, each the size of a fist, with a consistency akin to nothing I have ever ingested. At roughly 20 pence each they represent an extremely economical and satisfying pre and post-surf snack. I quickly dig out a couple, on this occasion braised pork, and demolish them by the roadside, Szechuan pepper and star anise aromas mixing under my nose in the stillness of the morning. Soon satisfied I tie the bag off on my boardshorts, hoist my 9”2 nose rider up onto my head and walk eagerly seaward through coconut groves and rice paddies. 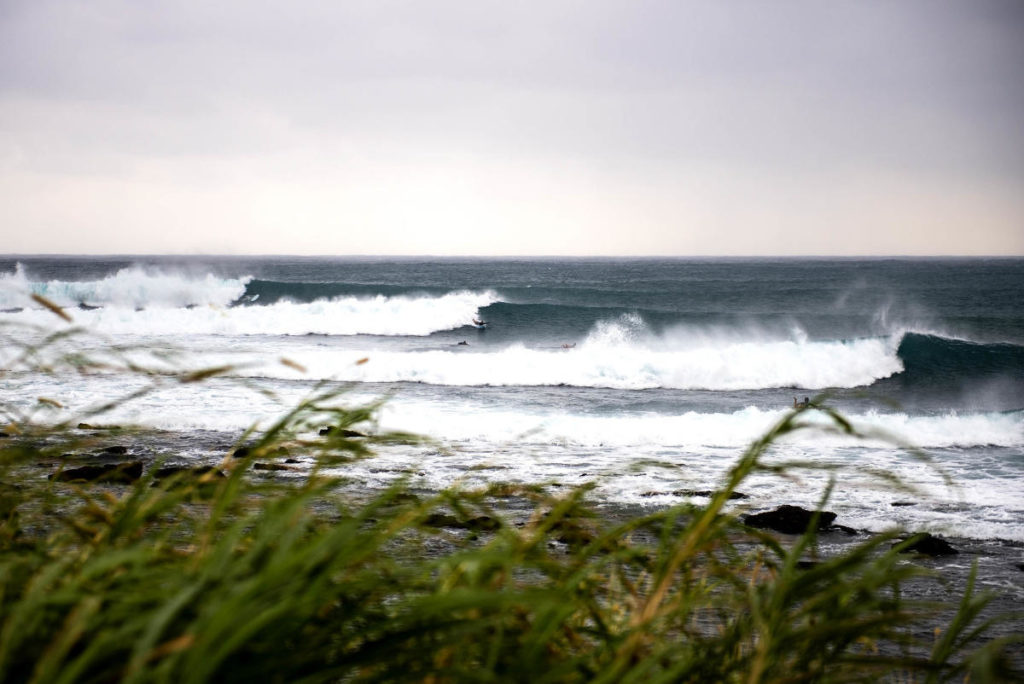 Taiwan, officially the ‘Republic of China’, is an island nation in East Asia, roughly the size of Belgium, dubbed historically by Portuguese conquistadors in the sixteenth century as ‘Formosa’ (Beautiful). Tropical in the south and subtropical in the north it sits smack on the same latitude as the wave-rich islands of Hawaii. Similar to its Polynesian cousin in many respects, Taiwan is 70% volcanic mountains and year-round boardshort friendly. The island rises vertically out of the ocean from moody black sand beaches, beyond which lay vast cloud-caressed mountain ranges with multiple summits above 3500m. 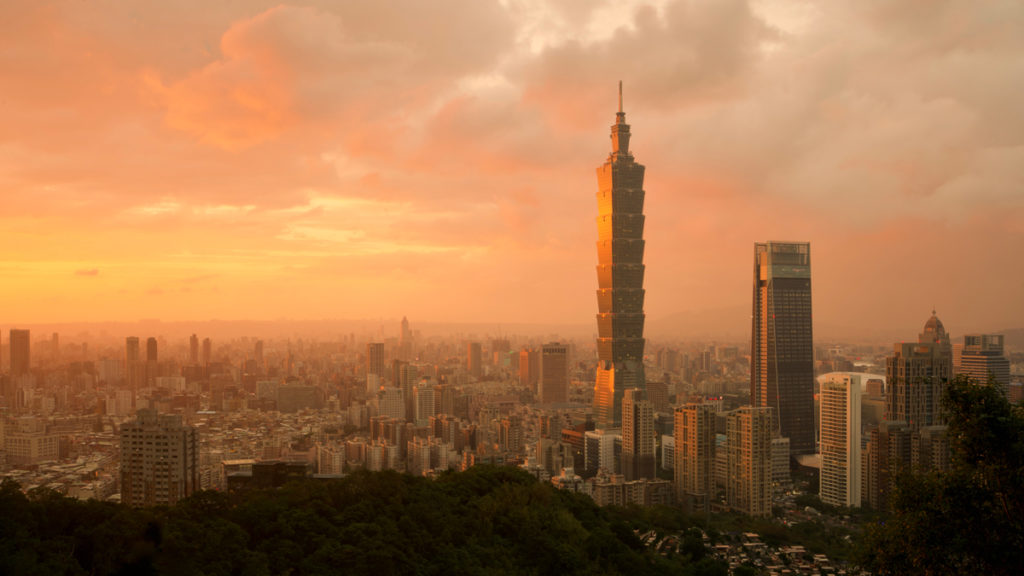 Since 90% of Taiwan’s population live in futuristic cities on the rolling plains to the north and west of the county, the east and south coasts are laid totally bare to the Pacific Ocean, remaining wild, laid-back and beauteous.

Said exposure means these dramatic coasts collect clean, stacked swells from two wide windows; northern storms forming near Japan from November to March (the same ones that hit Hawaii in peak season) and tropical cyclones from the south-west which number around 20 per season between July to October. All this considered, it was with a generous measure of intrigue that I travelled to Taiwan this winter in search of world-class surf and snack food.

When I reach the point at Jinzun Harbour I find a boulder under which to stash the steamed buns and survey my surroundings. The tropical sun is still low on the horizon, muted by a veil of golden fog which illuminates the landscape. The masts of fishing boats glint, chime and sway back and forth behind a grey harbour wall beyond an empty car park.

Often the case in Taiwan, sublime turns quite suddenly ridiculous. As I crouch to tie my leash a local girl with a pearlescent smile skips past me board-in-hand wearing a t-shirt that reads “Don’t do school, eat your drugs, stay in vegetables”. Whether the nonsensical slogan is being worn in sincerity or jest I know not. Lowering my gaze, and stifling a chuckle, I pick up my board and hop between boulders, timing my entry into the Pacific. 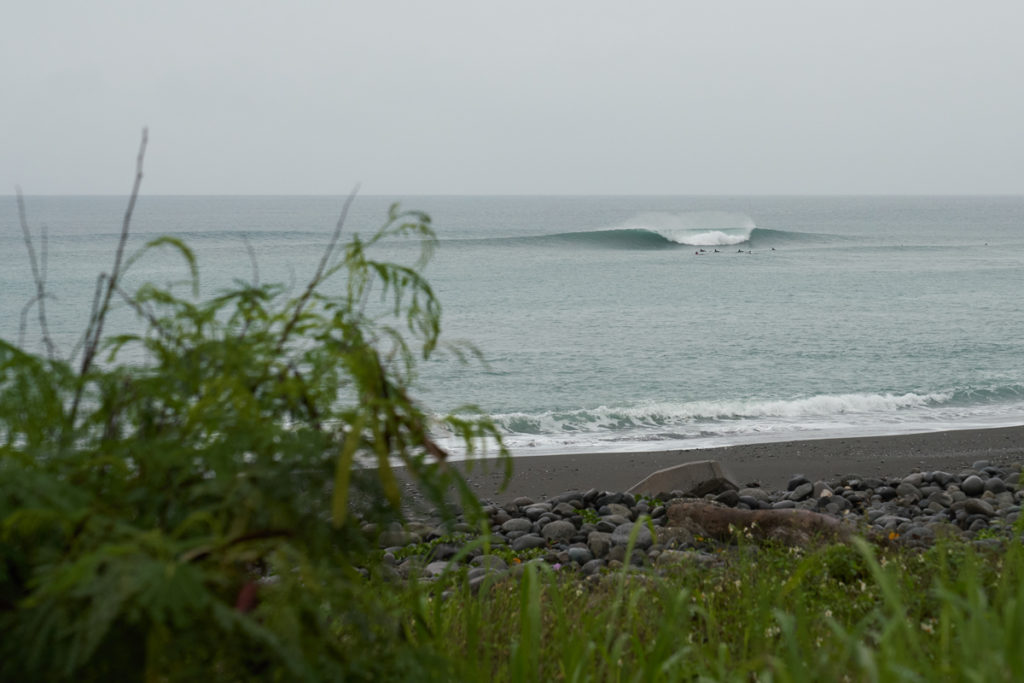 Alone at the peak, as I have been for the best part of two hours, shirtless and soaking up every stray ray possible, I do a subtle seated salsa in the 26-degree water (warmer than the air temperature so it feels like a jacuzzi). Taking advantage of my solitude and the dynamic nature of my oceanic seat I sing and sway along, between sets, to a song that’s been playing involuntarily in my head all morning. As some characteristic Taiwanese corduroy appears on the horizon I sit towards the tail and swing belly to the beach.

Angling and paddling for takeoff I notice a girl, who I later discover to be Wang Qwei, famed local longboarder and WSL wildcard at the 2019 Taiwan Open, smirking in my direction. In emblematic national fashion, despite being closer to the peak, she waves me onto the wave. Popping off the bottom, I cross-step clumsily forward and hook a foot haphazardly over the nose. The embarrassment of being caught red-handed gyrating in the lineup is soon quelled by the incomparable joy of weightlessness, hanging five on a glassy highline.

There are multiple hypotheses on the birthplace and mode of dispersal of Austronesian island peoples throughout the world, but it may surprise you, as it did me, that the most widely accepted theory is they originated from migrations out of Taiwan some 5000 years ago.

Using then advanced crafts such outrigger boats with crab claw sails, they colonised islands in every corner of both the Indian and Pacific oceans from Hawaii to Madagascar. I was surprised yet further to discover that despite this truly ancient seafaring prowess, Taiwan is a nation that now, and for generations, has feared the sea. Apparently, a high rate of drowning deaths in recent years has helped create trepidation, but the locals to whom I spoke believe the aversion has cultural and political roots going back to the turbulent relationship with mainland China.

Wang Qwei, the aforementioned local longboarder told me on the beach one afternoon that the education system even goes so far as to teach children never to swim in the ocean. Whilst this was great news for a surf tourist like me, seeking out the planets few remaining uncontested frontiers, it didn’t bode well for the fulfilment of the nation’s colossal wave-riding potential. Fortunately, according to Wang Qwei and other locals, the culture is changing, and more young people are getting in sync with the seas and learning about water safety. 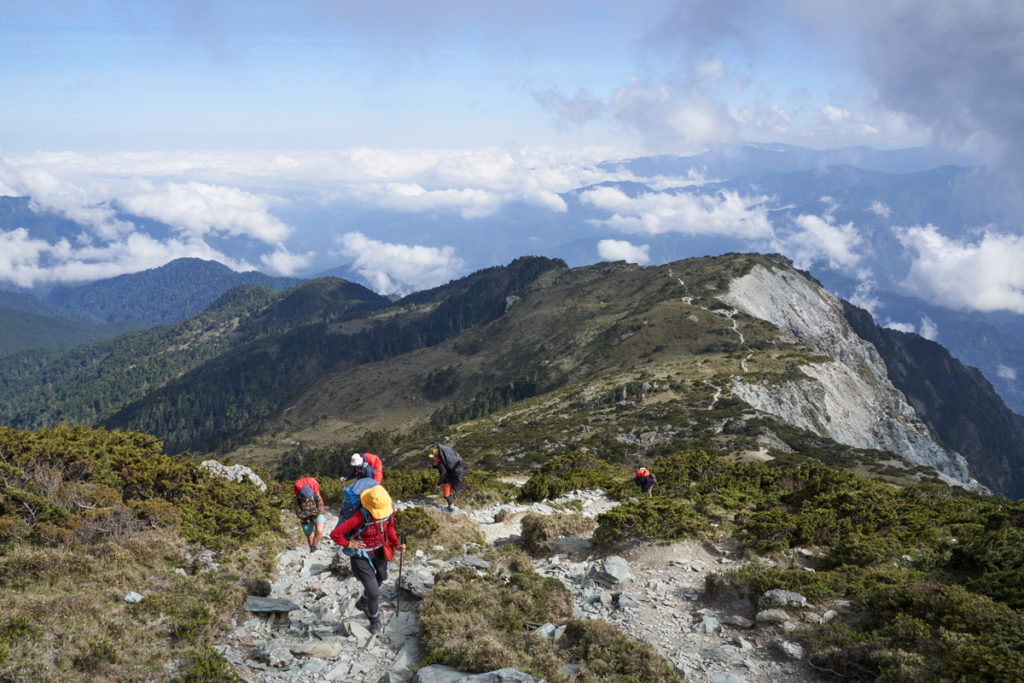 Despite being in Taiwan to surf, the extreme topography of the place has left me thirsting for higher altitudes. So, before heading north to catch my flight I’ve organised a token day trekking amid the curvaceous interior. Three hours into the hike, as the mist lifts, the tropical lowland foliage of Jinzun gives way to azure skies above an entirely different, almost alpine environment. Despite wall-to-wall sunshine, the altitude keeps temperatures down to a cool 5° which comes as a welcome change from the tropical humidity in coastal Taitung. Ridged green peaks like tree roots fan out, rising above and falling below a blanket of clouds aglow with ethereal light. As I watch the new moon slip behind earth’s sharp edge the missed surf session and long pilgrimage seems well justified.

Taiwan is a nation of colour and uncommonly convivial characters who wish for nothing more than to treat you well and share with you their culture, culinary wizardry and lush curvaceous island, which despite a propensity for fog and fast-changing weather, is undoubtedly the happiest of hunting grounds for the everyman surfer. 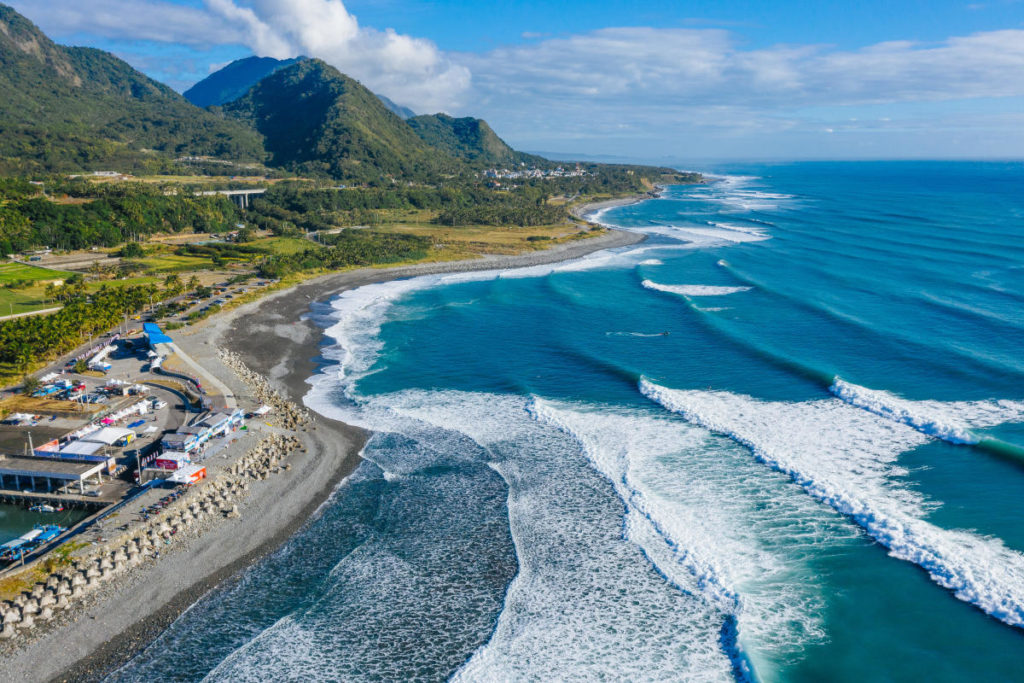 Serviced by a scenic highway, most of the breaks scattered along the south and east coasts are relatively mellow and well-suited for intermediates so don’t go to Taiwan looking for the next Pipeline; it’s more of a cultural experience with quality surf thrown in.

Being time poor I explored but a little, surfing only two breaks; Cheng-Gong a long, fast and spicy left point over coral, and Jinzun Harbour a peeling right and left point over boulders (the islands regional classic and home to the WSL Longboard series comp) but with 400km of exposed and scarcely explored coastline on offer, the island withholds many an empty treasure. Adventurous prospectors would do well to work up an appetite in the water, or indeed the mountains, before heading to one of the many night markets to sample some of the greatest snacks on earth. Maybe give the deep-fried duck heads a miss though. 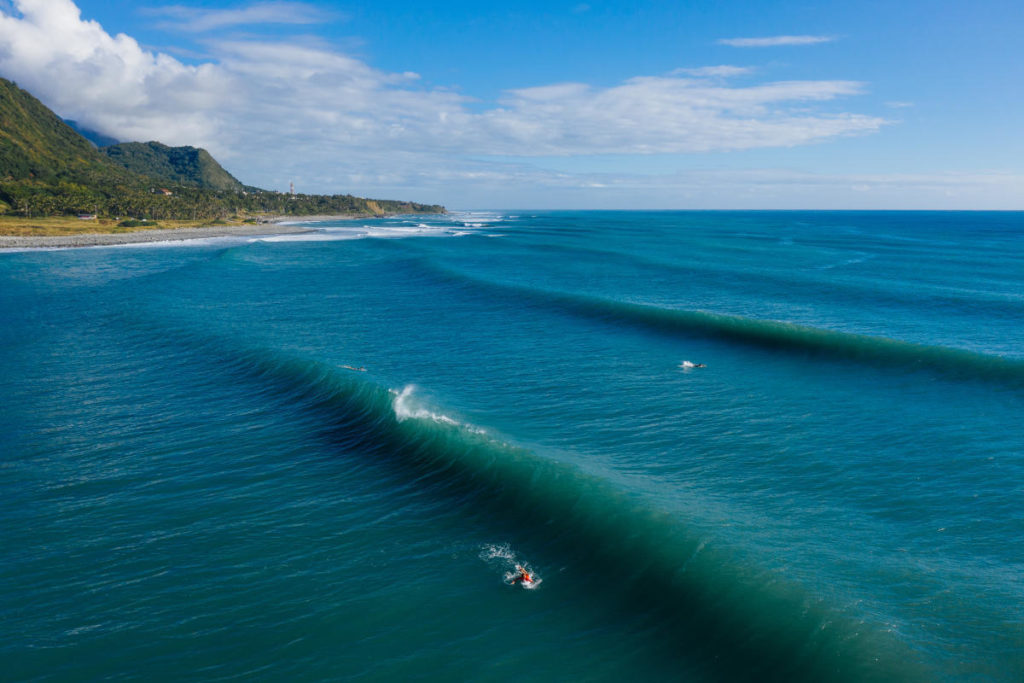