How Derek O’Neill, son of a plumber from rural Victoria, Australia, left school early, became a wetsuit sales rep, bought a round the world ticket and went from a part time sales assistant in Newquay surf shop Boardwalk, to CEO of Billabong International and co-founder of Vissla in Europe.

I meet Derek O’Neill at the Vissla HQ in Soorts-Hossegor on a hot mid-summer’s day, a day that would in fact turn out to offer the last surfable wave for five weeks. Coming surf drought unbeknownst to either of us, even so our meeting time is tentative up until the minute I walk in the office. He’d had a surf in the morning, was planning another for lunchtime’s low tide; maybe even a late too, depending on the wind. He’s cleared his timetable, responds to a couple of calls, lets a couple go unanswered. “I need to get this one,” he says.

It’s British Hossegor transplant shaper Rob Vaughan, known to his mates as Geezer, with a surf report from the bank they surfed that morning. Tidal arithmetic and Rob’s empirical observations from the dune are considered; we’ve got about an hour, max. Derek shows me a live wind app from Les Estagnots, from a kitesurf website he’s just found out about. It’s pretty clear that all the while there’s surf in the water, he has a pea under his office mattress, so to speak, the unshakeable next session twitch. It’s onshore, but still pretty light, all things considered.

The Vissla set up is pretty modest, practical. There is no Google beanbag ideas area, nor koa wood outrigger suspended in an atrium.  The warehouse downstairs is piled high with boxes being packed and shipped, and definitely feels like the beating heart of the operation, where the important stuff happens. But the office is nice and cool, and I’m allowed to bring my dog in, out of the heat, despite him being a prolific hair shedder. “We’ve only had AC for the last two summers,” Derek explains.

Back in 1989, Derek was working as a sales rep for Piping Hot wetsuits in Australia, when one day the company was sold and he found himself the first in line for the chop. “My dad was from Glasgow originally, and was always on at me about travelling. I’d worked full on since I was 15 year old, so I thought, ‘Let’s go. If I don’t go now, I never will.’ I handed my company car keys over, got the bus, got off at the travel agent and bought a ticket. I left 5 days later.”

Having burned through all his savings in the Alps, Derek found himself in London, and at something of a time-honoured crossroads on his grand adventure. Whereas many a travelling surfer low on funds finds their long weekend in a London hostel turn into lost months or years attempting to accrue the ever strong sterling while kicking against the tide of the cost of capital living, Derek opted for a quick left turn. Having seen a copy of Wavelength, and figuring that there had to be waves in England, he promptly headed for Cornwall, via Paddington. 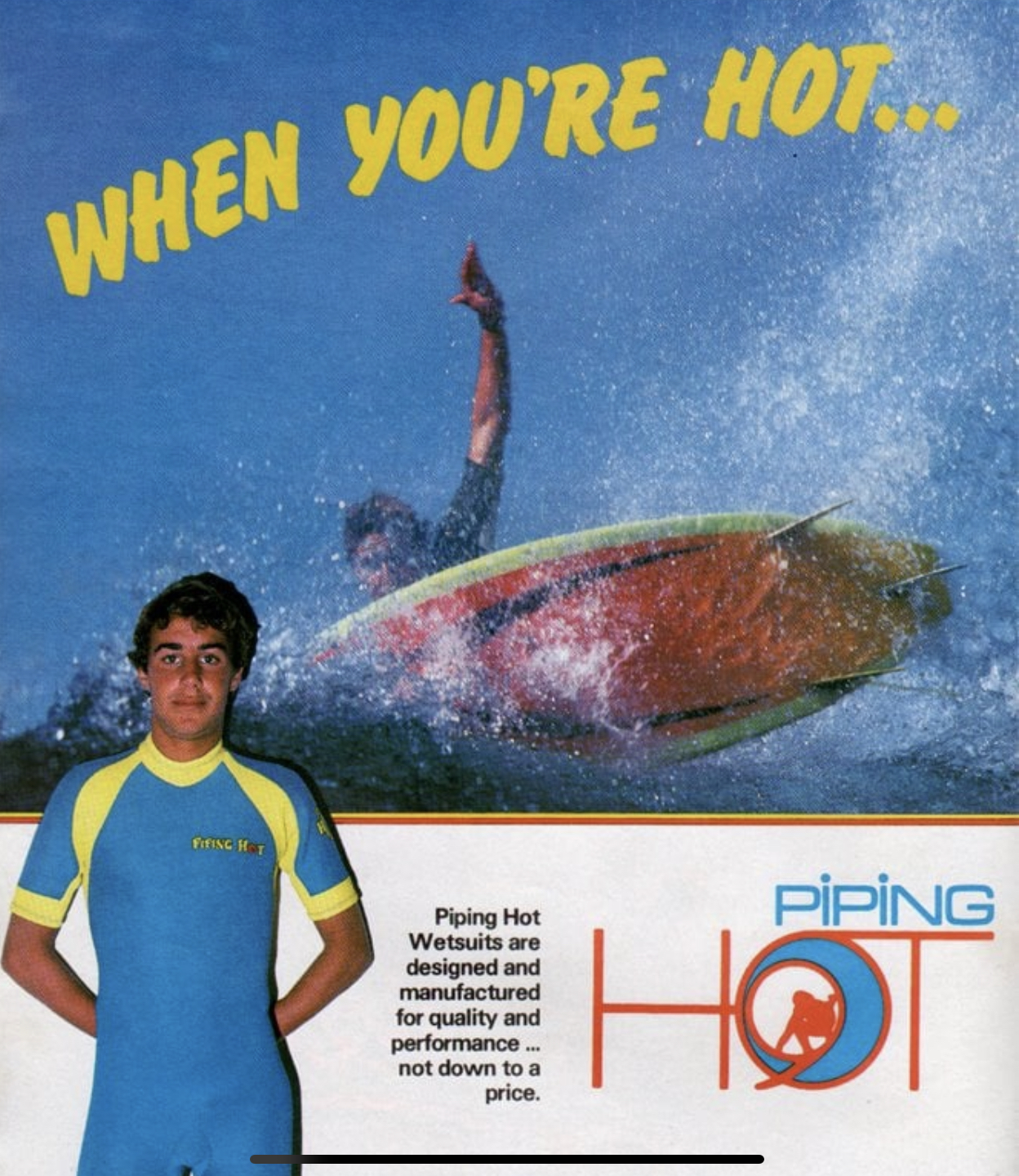 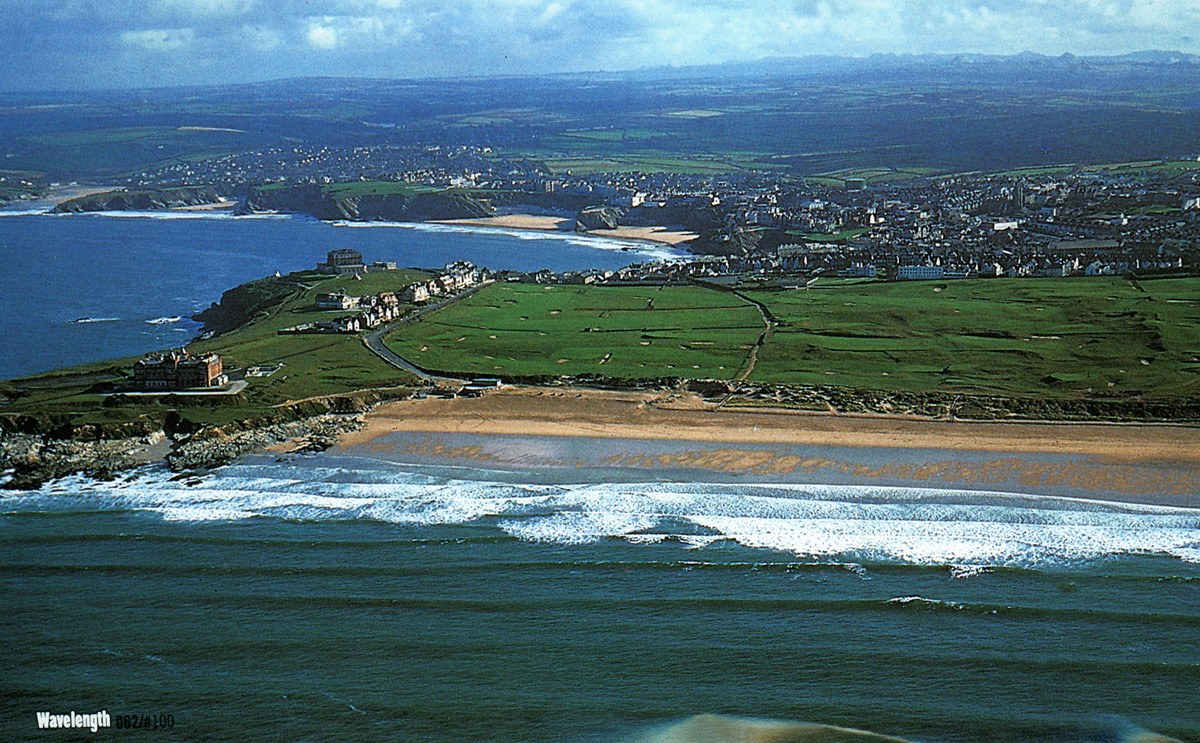 (L) When the trail went cold at Piping Hot, Derek hit the road. (R) Newquay, 1980’s, when a young Aussie backpacker could arrive by train.

“I got out of the train in Newquay station, and walked across the street to Boardwalk and said, ‘How ya going? I need a job.’ Andy Reed was managing the shop at the time, and said, ‘You start tomorrow.’ I can remember walking down to Fistral for my first surf thinking I was gonna blow everyone out of the water, and couldn’t believe how high the level of surfing was at the time. It was a really strong scene, loads of rippers, Spencer, Grishka, the Winters, heaps of good surfers. In summer the Fosters events were on, the EPSA, it was a buzzing time in the UK for surf.”

After an enjoyable year in Newquay, Derek headed down the coast to St Agnes, where he’d started working part time with Chops Lascelles, who was importing some bits and pieces from Billabong. “Working with Chops was great, he was a larger than life character.  But he had some ups and downs with his partners and it never really took off.” Derek took other beach focused jobs to make ends meet. “I was a surf instructor at Penhale, I had no BSA accreditation, no training, they were just like, ‘You’re Aussie, you can surf, you’re in.’ I had groups of 25 kids at a time, from the caravan park. I only had a mountain bike, and it’s 7 miles from St Agnes, and very hilly. I’ve never been so fit. I worked three nights week in the wine bar at St Agnes too, Chapel Porth seemed to be on every day that year. That was probably the best summer of my life.”

In late 1991, after it had all gone a bit pear shaped in the UK, Billabong HQ in Australia had decided a European office needed setting up, and that Derek might be the person to do it. “The UK had been really good for me, but when I got to France, it was on another level,” he explains. “I came down with Munga Barry, and we’d surf with Tom Curren and Maurice Cole at a few then secret spots, testing some boards, with nobody out. There were some great shapers around too, people like Wayne Lynch, Simon Anderson, Eric Arakawa, the experimentation was incredible at that period. The first winter I came to la graviere, 91/92, it was 4-8ft and offshore, for four months. It was never too big, I didn’t see La Nord break once, there were maybe 10-15 surfers throughout the whole day, you’d have to arrange it just to have someone to paddle out with. I was 28 years old and basically handed the keys to Billabong Europe, surfing epic waves every day. I thought I’d died and woken up in surf heaven.”

Although a certain element of right place, right time seems applicable, and Derek is ever keen to play down his own attributes, the extraordinary rise and rise of Billabong Europe can’t be down to luck and timing alone. I press him on why him in the first place, and why it worked out. “I guess I was always interested in why certain business decisions were made, and what the outcomes were. Back at Piping Hot, stuff like why the warehouse guys shipped to this customer first, why finance would withhold credit that account, why operations ordered this type of rubber, and how much, I was always interested in that side. Anyone could sell, but can you deliver on time with the right quality and price? At the time Piping Hot had some of the best surfers in Oz and you could easily get caught up in that shiny, marketing side, but I was always interested in the back end. To this day, I’d rather find out what’s going on from the warehouse guys, I’ll get better insights down there than off any spreadsheet. I’ve always been like that.” 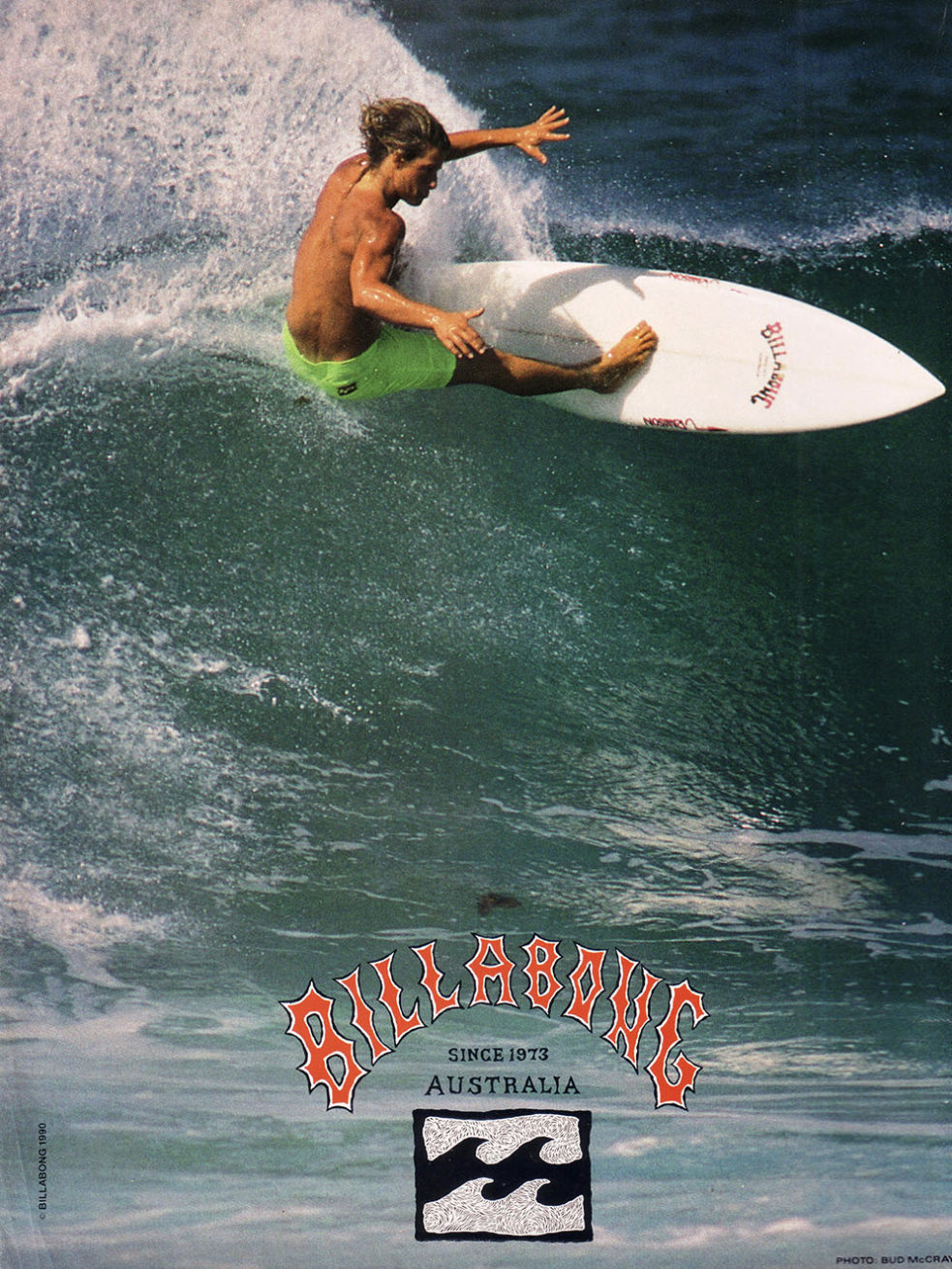 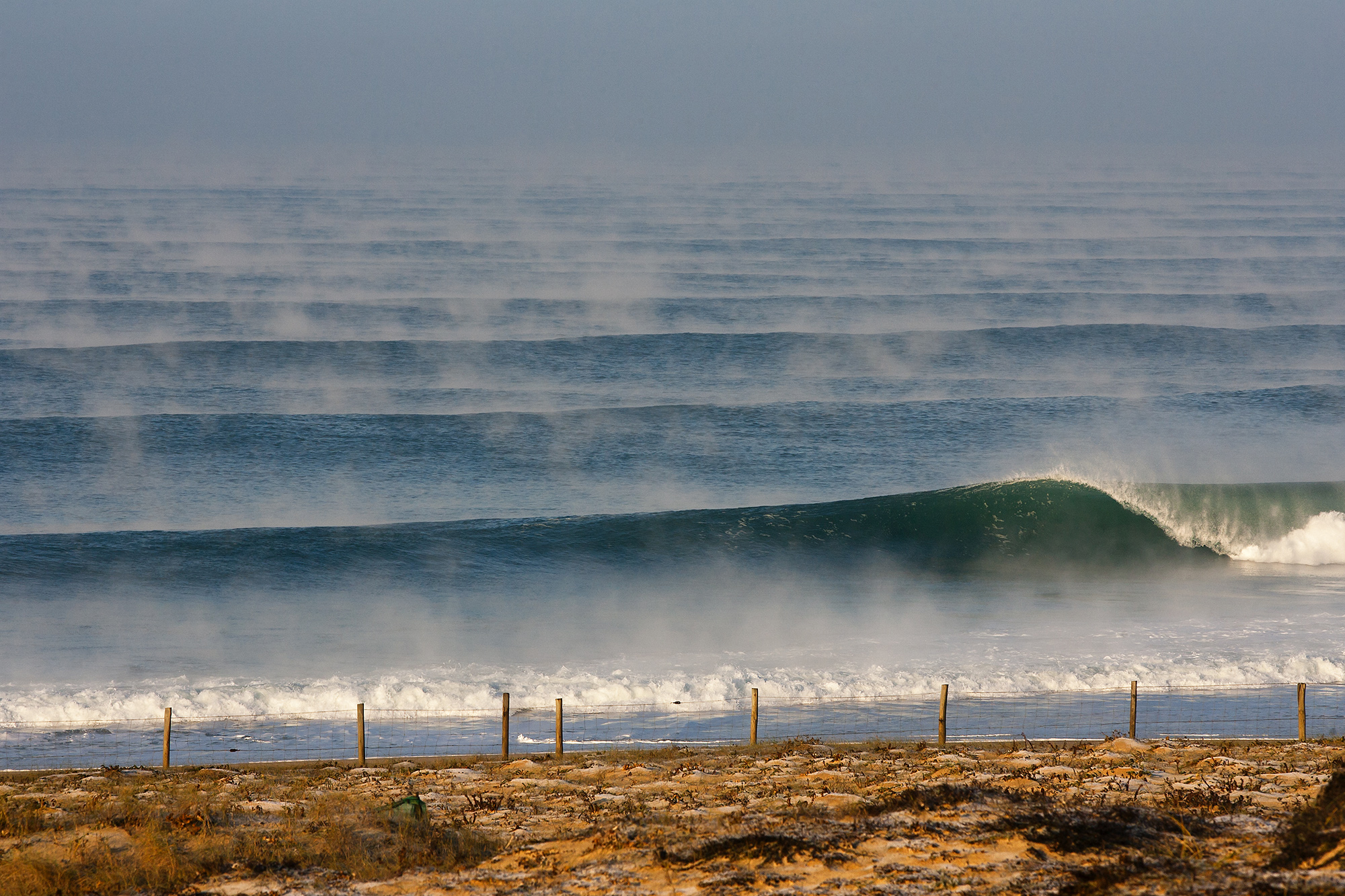 A chance meeting with fellow Aussie Reid Pinder on the Plymouth – Roscoff ferry as Derek travelled down to France helped set up Billabong Europe’s founding team. “Reid was sponsored by Billabong in Australia at the time, and I was like ’What are you doing? Come and work with me.’ He was the first person to join the company on day one. We started with three people in a 200m sq office, and within ten years had 350 employees and product in 23 countries. Rip Curl and Quiksilver had beaten Billabong into the European market by about 8-10 years, so the demand was already there, therefore we just needed to deliver the right product. People knew a delivery was coming on a Tuesday, and would literally be buying stuff out of the box before the store could get it on the shelf. Brands would be popping up with a small printing machine, and soon be doing 5 million dollars a year, out of a garage.”

In 2000 Billabong founder Gordon Merchant decided to float on the stock exchange. “That brought new pressure, some good, some not good” says Derek. “It brought in monthly reporting, where you’re supposed to show continued growth.” Whatever you did in one year did not matter, it was all about what was coming. As that growth continued, in late 2002 Derek returned to Australia to become Global CEO of the Billabong Group.

The surf biz juggernaut continued to melt Hossegor’s pot, populating it with bikini designers from Munich, marketeers from Innsbruck and Norwegian finance bods, often via a stint in the mountains. It went from an unknown backwater in an uncelebrated swamp perhaps less endowed with France’s famous cultural attributes than any other region, and probably became, in the pre-distance working era, the most cosmopolitan small town on the planet. The Billabong group was the biggest employer in town, new brands like Element, Von Zipper, Nixon, RVCA, DaKine and others were acquired into the company, and meanwhile sitting at the top was the guy that founded the European business. It seemed a bit too good….

The surf business globally continued to soar to ever new heights until the global financial crisis in late 2008. “We had some amazing growth years, the share price had gone up by around eight times from the first day of trading, then it was like someone just pulled the rug out from under you. Shareholders were still wanting more and more, the board of directors were wanting more and more, meanwhile trying to maintain authenticity in a market where frankly, at one stage it looked like the Euro could disintegrate, banks were failing, in the USA our biggest market people stopped spending, and maybe a new tee shirt wasn’t that important, there were just things happening in the economy that were out of your control. It was a constant juggle, as some in the markets thought we would shrink, and others who still seemed to think we could always grow the company by another 30% because we had done it before. Anyway after nearly ten years of that, my time was up.” At which point, the group had 10 000 employees, 600 stores, 11 brands and a $1.7 billion AUD turnover.

“With public companies, they put you away for a year on extended garden leave after you finish, so you can’t go and work for anybody else. I was 49, and having that year off forced on me was great, but it told me I didn’t want to retire. You go on a few surf trips, but there’s still six months or so where the surf wasn’t great where I was, living just below Gold Coast. So it’s like the ninth day of onshore, tiny, all your mates are at work, and it’s two weeks since you got back from the Ments or wherever you have just been. What are you gonna do, turn around and go back? It’s gets old pretty fast.”

“The natural step was to get another CEO job in a public company, or go and sit on a board, but that meant dealing with Wall St, investment bankers, those kinda people, and after more than 10 years of that, it just wasnt me at that time. I had some meetings in New York and LA, had some interesting offers from private equity, to turn around failing business and I looked at it, and went ‘Nah. I just wanna go surfing.’”