Home » Welcome to the Wild, Wild, East: One of the UK’s Most Toxic Waves

Welcome to the Wild, Wild, East: One of the UK’s Most Toxic Waves

Winter is my favourite time for weather and waves, but it is sometimes hit and miss on the north-east coast. This day involved a concoction of Arctic elements including force 10 winds, five metre swell, snow, sleet and ice for a totally hairball session at one of the most toxic waves in the country.

The wave itself is a phantom right-hander that goes months on end without breaking. Its rarity is probably a bonus, as the surrounding heavy steel and industrial chemical plants cause pollution levels off the charts. The water is foul smelling, the rocks have little or no shellfish and the only seaweed is algae slime. I only surf there when it’s going to be all time, as I have serious concerns about the water quality. The backdrop to the wave is far from picturesque, but it is stunning nonetheless. The landscape has inspired such films as the pre-CGI classic ‘Blade Runner’ and ‘Alien III’ was filmed just up the road. On this day however, only a few neoprene-clad extra terrestrials braved the elements.

The break is under the radar, but has a local crew converging on the spot when the time is right.
The plan was simple: ignore weather warnings, drive through the snowstorms and score waves at one of the most inhospitable breaks in the country. Photographer Lewis Arnold wanted to shoot from our Northcore jet ski to get the view from the channel, which meant we also had to find a launch and a ski pilot. The perfect man for that job was my good mate James Welford, who is trained by the RNLI on the rescue skis and has a water patrol qualification. As for his surf proficiency… this swell would soon decide that.

Getting out of the toasty car into the blizzard wasn’t easy, but a set of screaming right-handers greeted us once we stood on the bluff. It blazed through the line-up wasting most of the crew who were already out. I think some lads from Durham, Posh Rich, James and Chris from Scarborough were surfing that day. Richie from Flow Surf School clambered up the rocks looking somewhat shell-shocked by the hectic conditions. He surfs here a lot and warned me it was canny wild with crazy currents. I followed his advice and waxed my step up board.

We managed to get the ski in the water after a few ropey mishaps on a shoddy and icy slipway. The wind chill, which was already brutal on land, went subzero once we hit the water. With the elements blasting our faces, the hailstorms only increased once we hit the shipping lanes. We put our heads down and motored into the now empty line-up.

It is tricky pulling up at a spot that rarely breaks, especially with no one on

It is tricky pulling up at a spot that rarely breaks, especially with no one on it. All perspective goes out of the window. With no markers and rogue sets swinging wide in the storm force winds, it was tricky to know where to sit and which waves to go for.

To start with I didn’t do very well, sitting too deep and getting annihilated on my first few waves. I was underestimating the size and paying the price for it. After a few circuits getting washed around the point and rattled through the impact zone, I settled into the session and picked off the better waves.

The long racing walls allowed sweeping speed turns and hooks under the lip. I was buzzing on what was one of the more solid swells we had had in the North East in months. With no one to share it with, everything was working out perfectly! A lone windsurfer, Steve Thorpe joined me, and picked some great waves.

Only afterwards did I hear he got barrelled on a wave that ended up breaking his rigging, leaving him with an hour swim to salvage his sails and warning calls to the coastguard being placed. Not the nicest place to be lost at sea, so hats off to him for surviving that ordeal! Ian Forsyth who regularly shoots this spot somehow kept his lenses dry and captured the angles from land. After a few hours James had to pry his frozen hands from the jet-ski’s throttle and Lewis was borderline hypothermic sitting on the back of the ski.

It was time to call it a day. James was raving about double overhead caverns being obscured by the maelstroms of Baltic hail storms. Lewis defrosted in the back of the car and said it was hard to stay focused on the waves with everything that was going on, but both guys did an awesome job. 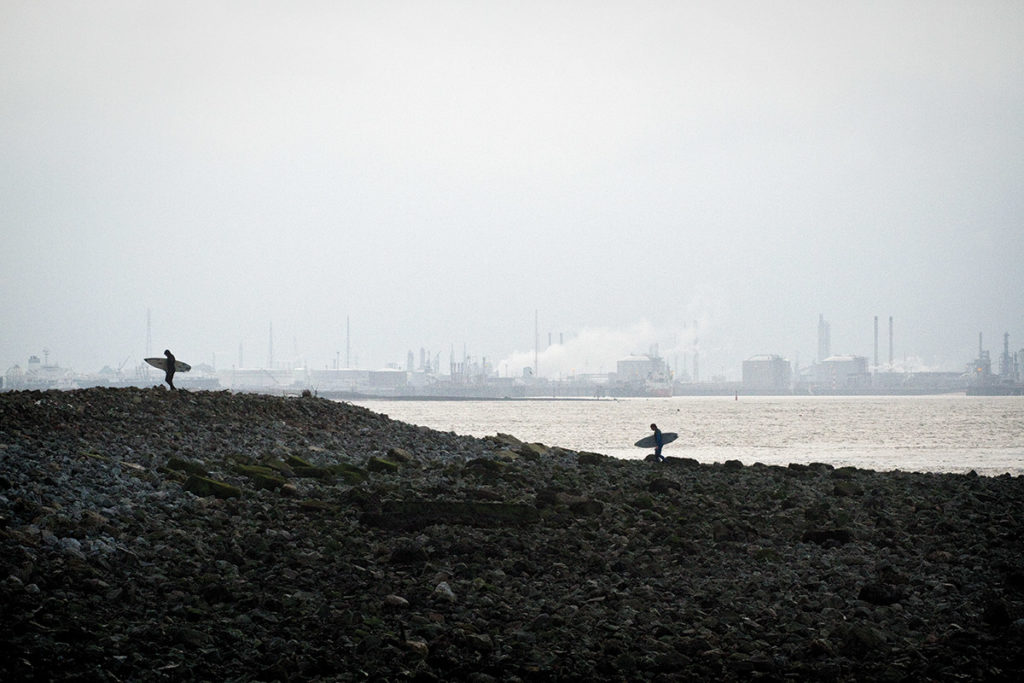 We were buzzing from our adventurous day out and the stoke from that session kept us supercharged until the next North Sea winter pulse!

This article was originally published in Wavelength issue 226. Be the first to get our articles in print and online by subscribing here.