How did a pair of film makers from outside the world of surfing end up making such a definitive documentary? It all started in a SoCal storage unit. Full story here:

Earlier this week we announced our UK tour of Momentum Generation, a seminal new documentary from directors Jeff & Michael Zimbalist.

The brothers are well known for their documentaries portraying grassroots youth subculture in Brazil’s Favelas (Favela Rising) and their exposé of the intertwined lives of drug kingpin Pablo Escobar and Colombian football superstar Andres Escobar (The Two Escobars), however, this is their first foray into surfing.

Which begs the question: how did they end up creating such an in-depth film, full of never before told stories about some of the surfing world’s most covered icons without ever having dipped a toe in the genre before? As it turns out, it all began in a SoCal storage unit with an invitation no seasoned storyteller could refuse:

“We’ve always been intrigued, even envious, when hearing stories of cultural icons who lived together during their formative years and helped each other to become hugely influential individuals in their own right. But rarely do we hear of these historic convergences being captured on camera. So we knew it was a special opportunity when Taylor Steele offered us access to his full video archive of surfing’s most legendary crew living together like sardines at Benji Weatherley’s house on Oahu’s North Shore during their teenage years. This was the crew that would go on to take over the sport, win world titles, and forever reshape worldwide culture in the 1990s and beyond… but it all originated at Benji’s house. 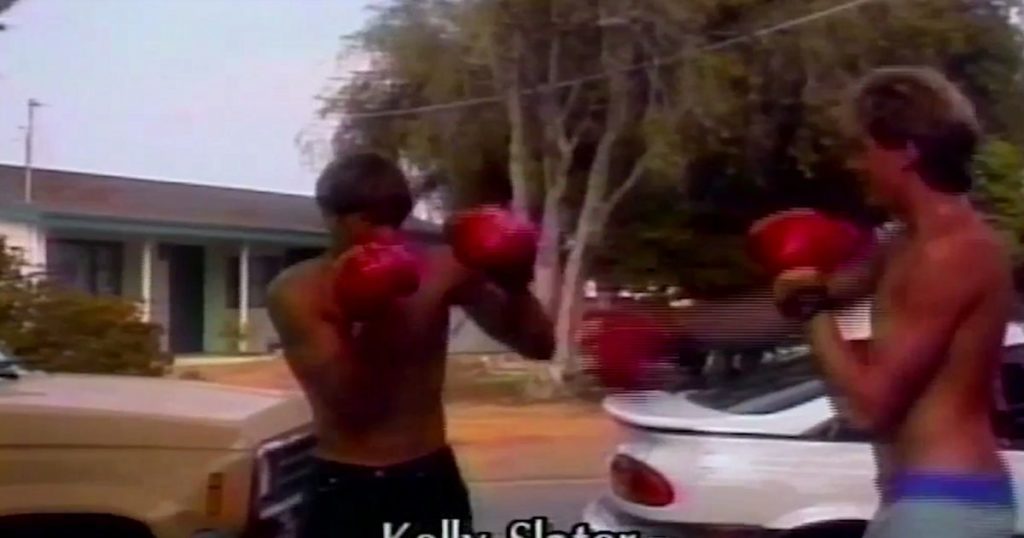 Kelly Slater boxes then pro bodyboarder Paul Roach in an infamous scene from his Momentum part.

We started in Taylor’s SoCal storage unit, shipping and up-converting a ton (literally, a ton) of old videotapes. The further into the story we got, the more sources we discovered, and our team soon became determined to amass the most comprehensive archival collection on the Momentum Generation to date. Ultimately, we licensed footage from over a hundred archival sources, pulling treasures from tens of thousands of hours of intimate archival from the Momentum crew’s personal cameras to thousands of hours of contest and lifestyle footage collected over the decades.

But there was much more at play here than just archives. The bigger treasure for us turned out to be spending time with and learning from the experiences of the Momentum crew themselves. Even decades after they broke the sport wide open and hit the peak of their success, these guys still kept each other honest on a daily basis, challenged each other ethically and competitively, yet were there for each other with open arms in times of need. This tough love dynamic was immediately familiar to us as one we grew up with as competitive athletes and brothers.

We’re very grateful all of the film’s subjects invited us into their world and trusted us with intimate details of their lives. We shot over thirty interviews, most lasting a full day, and something universal came to the surface. In their journeys, we saw the same questions we have been asking ourselves in our careers about the tradeoffs of success versus contentment, individual gain versus collective unity. In a culture that celebrates achievement above all else, how do we remind ourselves of the deep importance of Friendship?

Two years and many waves later, what started as an archival geek out has become a profound reminder of what’s important in our own lives. We hope the film can have a similar impact for audiences as it has for us.”

It’s rare for filmmakers outside the world of surfing to choose such a seemingly core story as their subject matter and nail it, but that’s exactly what the Zimbalists have done. Indeed it seems in their case the detachment has aided them in their ability to investigate all elements of the story, digging through the standard competitive surfing narrative to the real human interest story.

Join us for a screening of the film on our UK tour, with tickets still available for Newcastle, London, Bournemouth, Exeter, Bristol, Newquay, Edinburgh and Worthing. Grab yours here. Or find out more about the film here.