Home » In Conversation With Kai Lenny; The World’s Most High Calibre Waterman

In Conversation With Kai Lenny; The World’s Most High Calibre Waterman

Kai Lenny on why fun, rather than machismo or being core, is the ultimate route to progression, the prospect of 30 foot waves in a wave pool (he says it’s possible) and more:

Last weekend Kai Lenny was in London for a stand up paddle session on the Thames, presented by longtime sponsor TAG Heuer. 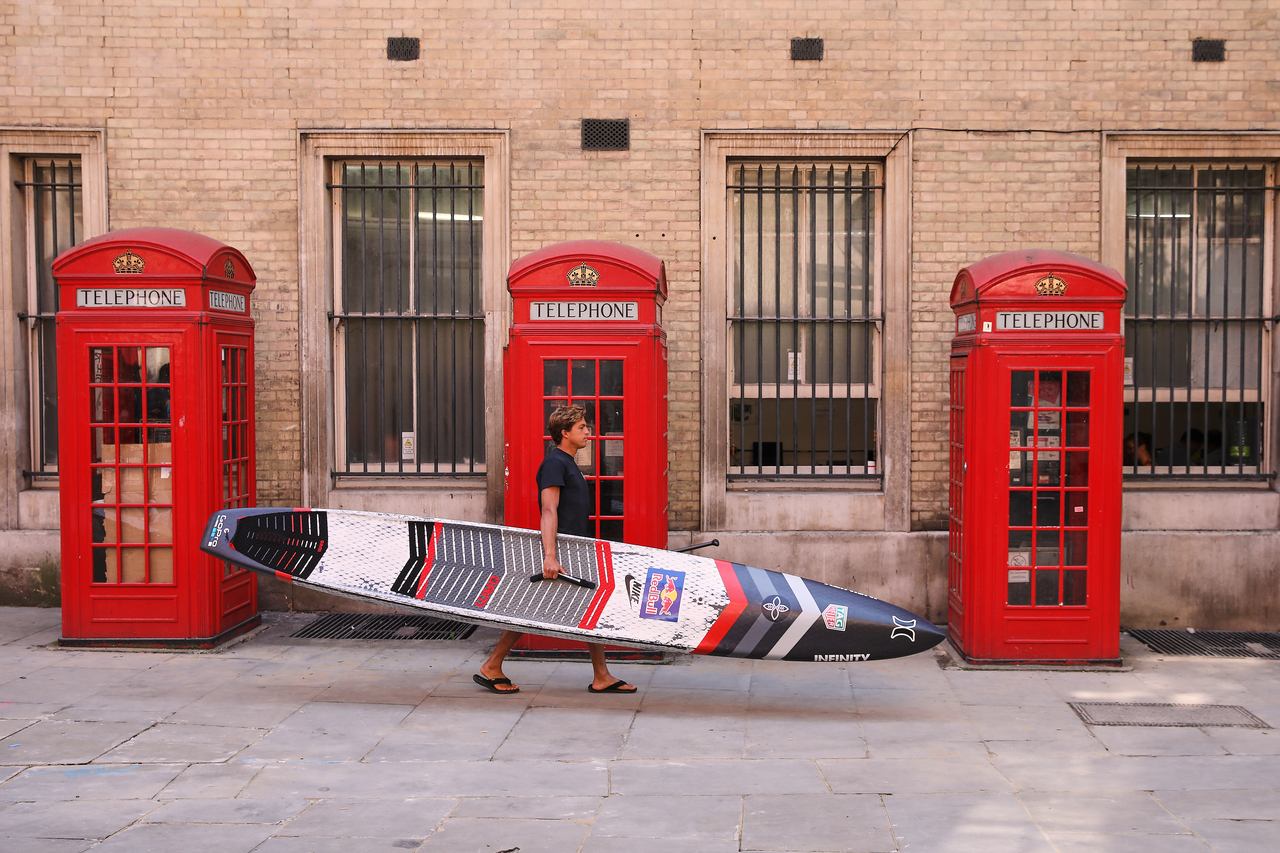 Born in Maui to ocean loving parents, Lenny was surfing by the age of four and flying around behind a kite by the age of nine. Before long, local multidisciplinary legends Laird Hamilton and Dave Kalama had taken him under their wing, introducing him to foiling, stand up paddle boarding and eventually, riding really really big waves.

Since then Lenny has gone on to develop a list of accolades as impressive and diverse as any waterman on earth, with six SUP world championships under his belt, a dozen Big Wave Awards nominations, a win at last years Puerto Escondido challenge and significant acclaim in both kitesurfing and windsurfing.

More recently he’s pioneered a grand resurgence in foilboarding, which has seen it re-emerge from relative obscurity and appear under the feet of some of the world’s best.

Despite his range of interests, Lenny remains firmly at the forefront of the progression of both tow and paddle big wave surfing, with lofty aspirations for the future of the sport.

When we found out he was going to be in London, we jumped at the opportunity to sit down with him and find out more about the development of his unique surfing outlook and his predictions for the future of the sport. 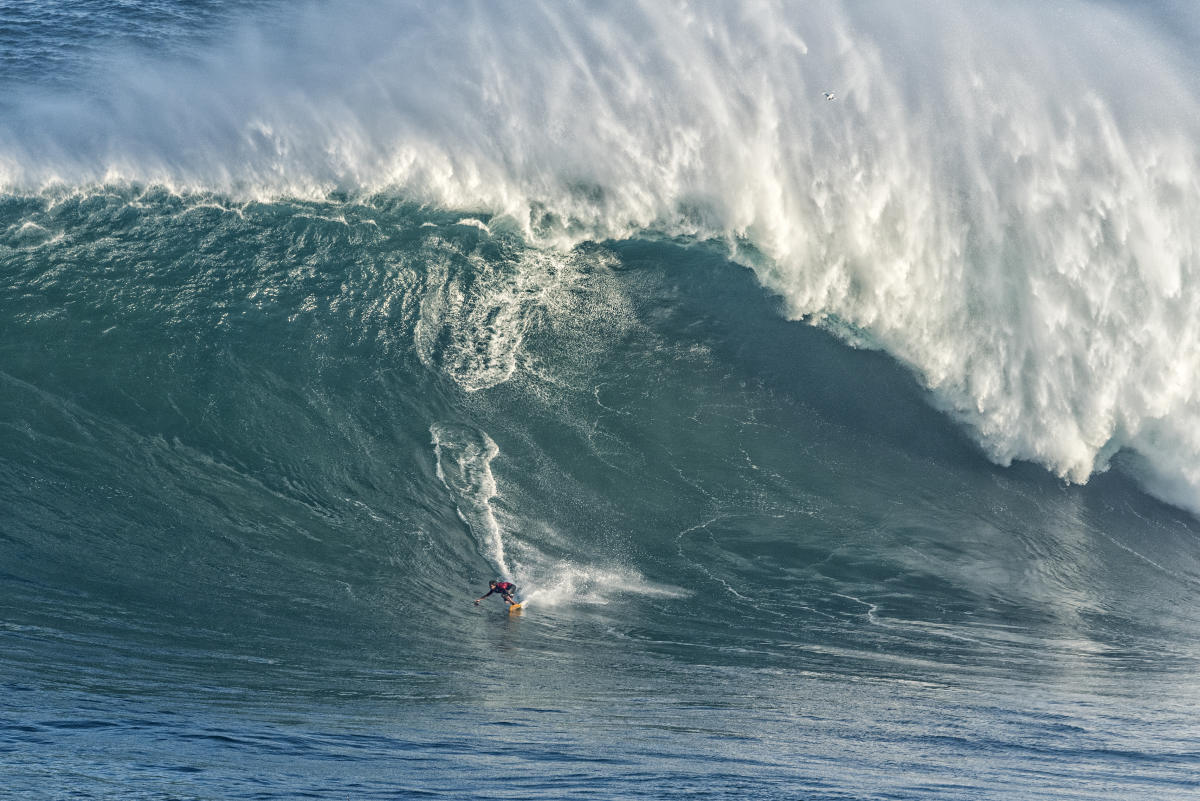 We read you surfed your first wave at Jaws when you were 16, do you remember that wave and were you scared?

I’d been watching it forever- as long as I can remember, so I was really excited about getting out there and obviously nervous being it was my first time, and even more nervous because I got invited to go out with Dave Kalama and Laird Hamilton. It wasn’t a giant day but it was 15 foot Hawaiian scale, so 30 foot face waves, and I was on a foil board, with snowboard boots. It was crazy, you’re locked in and if you fall you’re along for the ride.

The foil snowboard boots I was using had been sitting and the sole was starting to fall off the boot, because you know the salt water eats everything. By the time I started getting towed the bindings had come completely off and I was just standing free on the board, and those foils weren’t designed to not have boots.

I had to jump off and I could just see the look of disappointment on their faces, because they didn’t know my boots were broken, so they obviously thought ‘why are we towing this kid in when he can barely foil?’ But I showed them the boots and they were like ‘ooh ok’ and gave me theirs and off I went and caught a bunch of good waves. It was epic.

And did you always have that desire to surf bigger waves, but were just waiting for your chance?

Yea, now you are kind of just free to go out there whenever you want, but back then those guys were the guys and you had to have permission from them, so I was just waiting to get that. 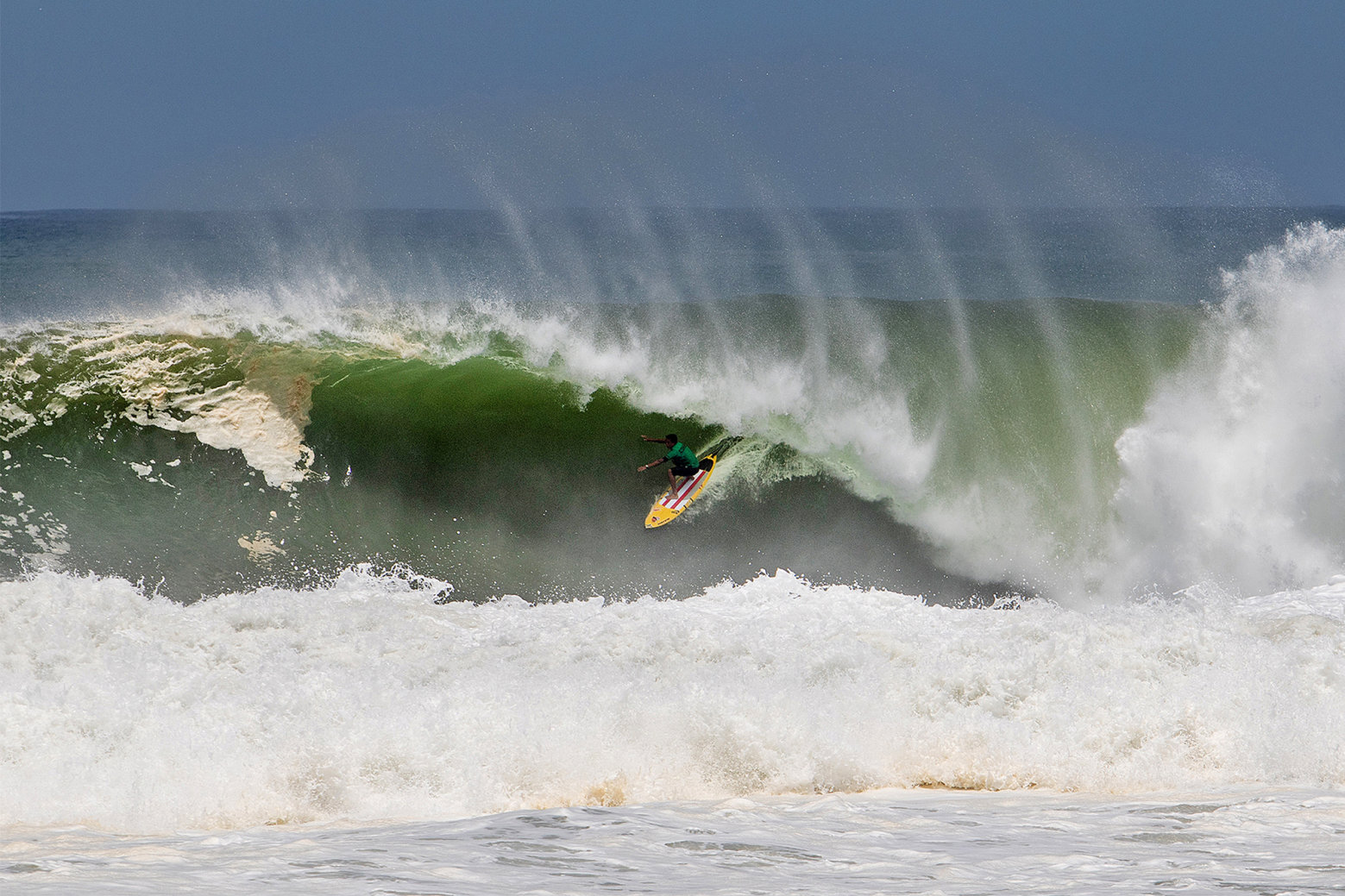 Sliding through a Puerto bomb on his way to winning the WSL Big Wave World Tour event at the Mexican beachie last year. Photo Villela // WSL

And now are you seeing guys out there who shouldn’t be out there?

Oh I mean yea, now it’s super popular, so there’s the really good guys, and the guys who probably shouldn’t be out there and they’re endangering themselves. You see them typically wipeout more than they make a wave.

Do you still feel the fear?

I think the fear is worse than ever because now I know what I’ve done and what the next level is; going deeper on a bigger wave, and getting barrelled. Now, you’re making it scarier for yourself. Honestly, if you’re not scared in really big waves, then you’re probably kidding yourself. I think fears like a necessary thing.

I think being calm is the most important thing about big wave surfing, you can handle all that fear if you’re calm but as soon as you start freaking out a little bit then it’s over. 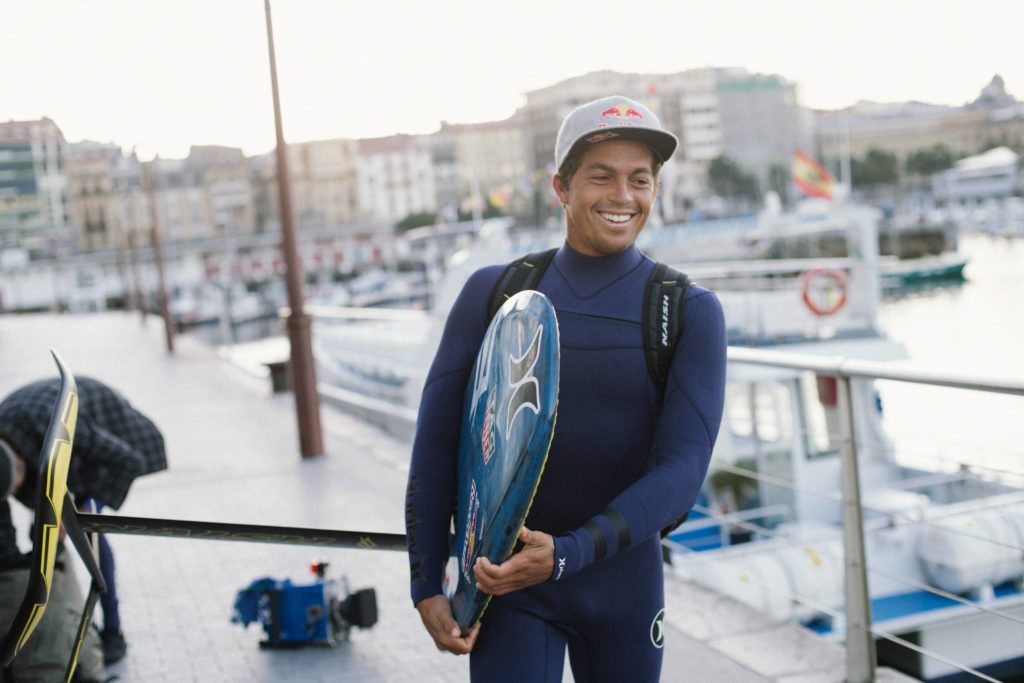 Do you think you are naturally more fearless than some other people, or is fear just relative to experience?

When you were growing up it was quite unique to be into such a variety of ocean sports and we heard you copped quite a lot of flack. Do you think the tribalism and animosity between the different sports has eased up a bit since then?

Recently everyone’s become way more accepting of other sports, which is really cool. When I first started everyone was pretty anti this anti that, you had to just stay core to just one, which didn’t make sense to me. The way I tried to combat that was to prove myself in the realm of those core sports and just be legit, in the traditional sense.

You know if you’re charging bigger waves and surfing better than most of the guys that only do that what are they going to say? If they say anything they just look lame. I think it’s cool to be core, but it’s even cooler to do everything. I just want to be on the water and a lot of times it’s not great for one sport every single day. It depends where you live too, Maui’s a windy place, so it’s often really good for other sports like windsurfing and kiting and stand up paddling. 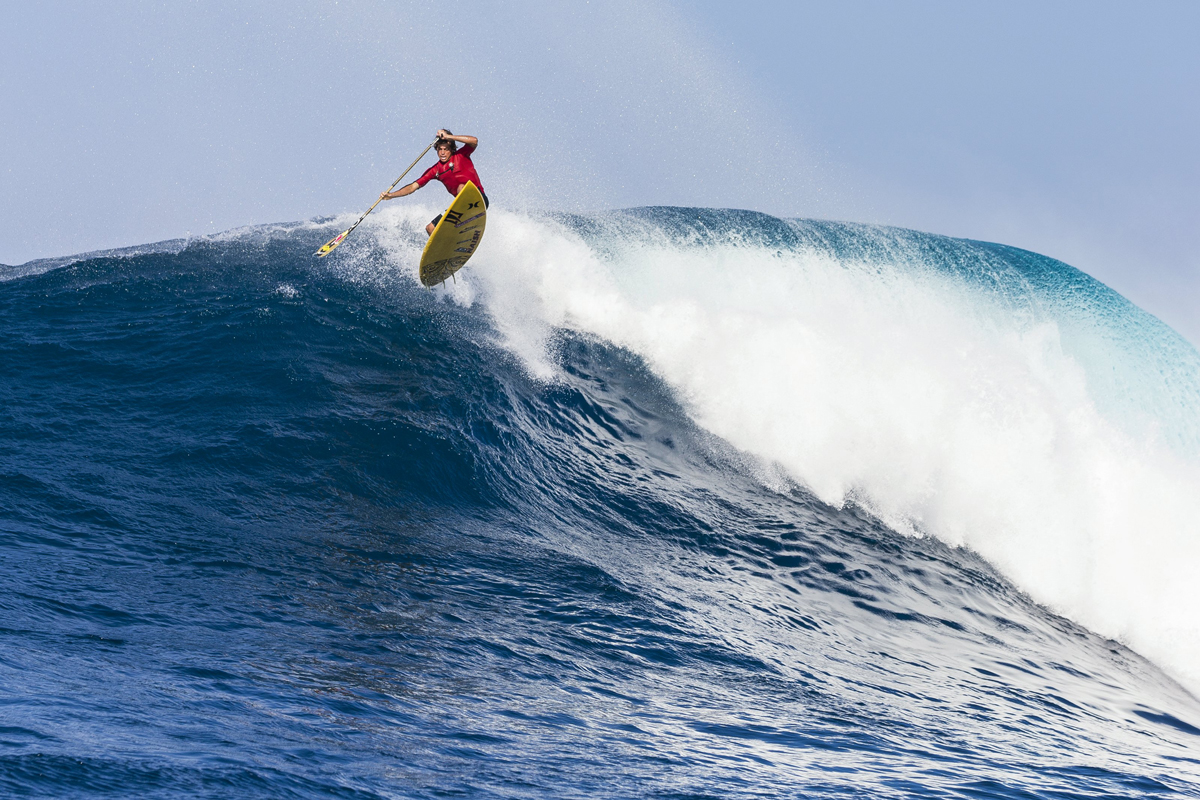 And have you got a favourite?

I don’t really prefer one over any of the others, to me it’s just like if you’ve got a tool chest, whatever the conditions are, you pick the right tool for the job. My favourite thing in the world is to ride a wave.

I think you can get almost too into one sport and end up thinking you can only do that. If you’re trying to achieve something within a sport you’ve got to do it all the time and be dedicated, but at the same time, if your goal is just to have fun and ride waves, then you might as well do everything, because you’re going to be accomplishing it 99% of the time… 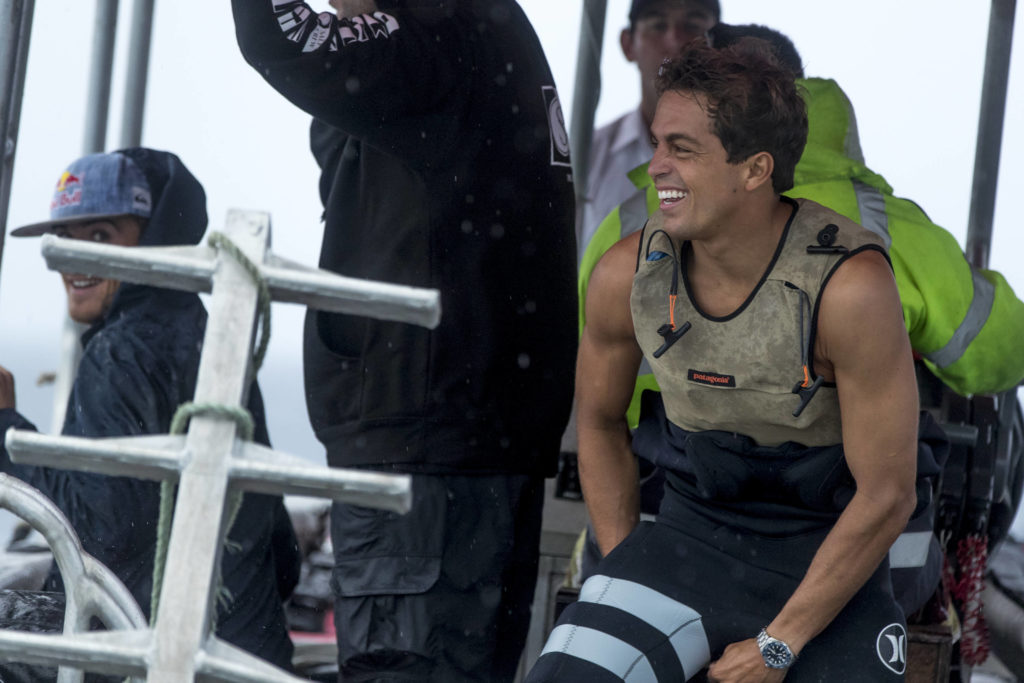 Over the last few years the focus of the big wave world has been on paddling, do you think after Ramon’s wave at Cloudbreak in May things might be coming full circle and there might be a resurgence in towing?

I think people got really into paddling because it disappeared for many years and it became all towing. Then in the last 8-10 years, there was this paddle movement coming back, and there’s still a lot to do in paddling.

But I think at a certain point people are going to start towing again because they’re going to realise it will enable them to surf big waves as if they were on a shortboard. Big wave surfing in general isn’t very high performance, the most high performance thing you can probably do, right now, is get barrelled. And that’s the ultimate, but at the same time you have such a big canvas there’s no reason why you shouldn’t be able to do a hack or a huge air or you know, draw lines.

It’s like the difference between going straight down a big mountain in Alaska or being like Travis Rice and doing flips all the way down. I think that’s the next level of big wave surfing.

I think paddling should always be there because it’s core to the form; you’ve got your two arms to bring you in. I think paddling is certainly the more macho bit, and I think if you’re worried about being macho just paddle, but if you just want to go have fun I think towing is truly acceptable.

Where is the sport of surfing as a whole heading in the next five years?

I think with the revelation that wave pools have brought, surfing is going to get a lot more technical and the ability to land maneuvers on a dime is going to be insane.

Which pools have you surfed?

I’ve been to the Kelly Slater wave pool as well as the one in Waco, Texas.

Which do you prefer?

I mean they’re very different, it’s like surfing a point break vs surfing a beach break. I think they’re both insane. There’s so many opportunities, and you’re not taking anymore space in the ocean- it doesn’t hurt anyone to have more waves around. Typically people are quite anti-new surfers, whereas at the same time the whole industry is based on new surfers, so it’s kind of ironic.

That said, it’s hard to beat what the ocean can make, and there’s nothing like the real thing. I think humans could get pretty close, but I think the future of the sport should be 50 foot waves made by machine. It’s possible I hear.

Are you working on one?

(Laughs) I wish. I told Kelly and the guys at Waco, ‘hey, can you make a wave that’s at least 30 foot high?’ You’d become the best big wave surfer in like two weeks, because surfing big waves is so sporadic. Even when there are waves, most big wave surfers might not surf a wave for four hours, and then they get a crazy one and that’s the one you see.

Surfing big waves is technical and it takes patience, or a lot of luck. I feel like big wave surfing is very calculated and methodical, or extremely lucky and you can just luck yourself into the best wave of the day and make it somehow.

And in the future are you wanting to explore more?

Yea, for sure, you know it’s hard sometimes having the mount Everest of big waves in surfing in the world in your backyard, but i definitely want to experience other big waves, and not just paddling too, I want to tow, and windsurf them and kitesurf them, I just want to experience them all differently.

Thanks Kai, enjoy the rest of your time in the UK.

Kai Lenny is an ambassador for TAG Heuer; part of a team of athletes dedicated to defying the boundaries of time by pushing themselves past their limits and never cracking under pressure.