Home » The Corona Court Of Public Shaming Is In Session; Careful – You Could Be Next

The Corona Court Of Public Shaming Is In Session; Careful – You Could Be Next

Today it's the surfers, the sunbathers and the cyclists, but tomorrow, could it be you the mob turns on?

Commentators predicted that a shared traumatic experience could be just the ticket for beginning to heal some of our deep societal divisions.

And there have been a few examples of behaviour that makes the heart sing. Like the inspiring stories of community efforts taking place in small towns up and down the country, or the fact that 750,000 people volunteered to help the NHS in just three days.

However, these stories have been dwarfed by the dramatic rise in public shaming brought on by the lockdown measures, driven in equal parts by the click hungry media and battalions of furious keyboard warriors.

Although people attacking each other on social media is nothing new, the intriguing thing about ‘#covidiot’ shaming, as it’s been dubbed, is that many of the most high profile examples focus on those previously heralded as society’s more virtuous; healthy-living, fit and active folk like cyclists, joggers and of course, surfers.

While instances have been innumerable since global lockdown began, the first example to really catch our eye came last Sunday.

After a sunny day across the country, Twitter was awash with news that inhabitants of the south London borough of Lambeth – thousands of whom live in cramped, gardenless high-rise flats – had dared to go out and exercise in the one green open space available to them; Brockwell Park.

Photos featuring joggers and groups sat on the grass cascaded angrily through the trending #brockwellpark hashtag.

“Fuck ALL 3000 of you wankers that went to Brockwell Park this weekend. You selfish, disgusting and shameless wank stains,” read one tweet that summed up the general sentiment.

In response to the outcry, the council promptly closed the park, forcing the borough’s 325,000 residents to either stay at home or battle for a spot on the always busy pavements that trace the park’s huge perimeter for their one round of daily exercise.

The fact that Brockwell Park is 508,00 sq meters, meaning that even if all 3000 of the day’s visitors had been in there together, they’d still have had 170 square meters each, seemed to be a boring footnote, almost totally lost on the Twitter mob. And the fact that no one commenting had any way of knowing if the groups pictured shared a household or not was deemed equally irrelevant.

On the same day on the other side of the world, a New Zealand news site ran an image of a surfer raising his middle finger, while a policewoman approached him from the foreground. 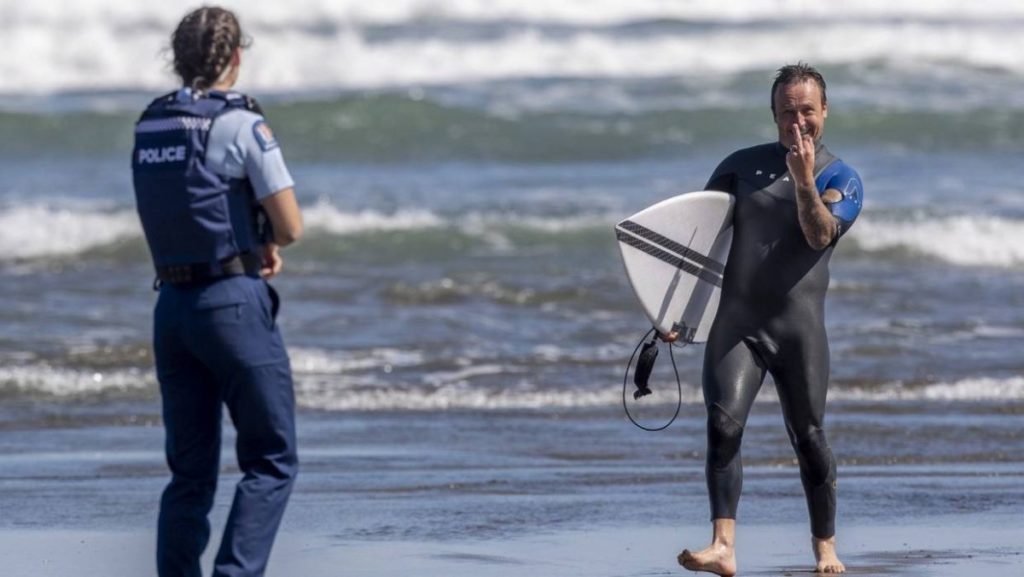 The photo in question, via Stuff.co.nz

Surfing had just been banned in the country and the image immediately began to circulate with claims it depicted an act of defiance by a hedonistic reveller against a hard-working member of law enforcement.

It has since become clear that the surfer was not swearing at the policewoman, but rather the photographer – a fact that is plain to see from the image once it’s pointed out. But, as is the way, the story was halfway around the world before the truth had got his trousers on, spurring a slew of online death threats that the pictured surfer claims have left him fearful for his family’s safety.

Then yesterday, much closer to home, Cornwall Live posted a gallery of images from Fistral Beach, featuring clearly identifiable surfers who had apparently caused fury among local residents by daring to paddle out. Although it’s hard to tell the exact distance between them from the shots, there were no clear examples of any surfers flouting the social distancing rules. Nor was there any evidence to suggest they were breaking the law in any other way.

Accordingly, it’s impossible to see any justification for the gallery beyond the desire to get clicks, while stirring up anger and resentment that some are using their exercise time to enjoy themselves. Whether intended or not, the images clearly paint a target on the back of the identifiable individuals.

Now it goes without saying at this point that it’s imperative that people follow the rules, both with regard to surfing, and your day to day life.

But if you are the sort of person who joins in with these cacophonies of comment section shaming, we’d suggest you stop for a moment and ask yourself a few serious questions.

Like, do you really know the specifics of the situation being reported on well enough to cast such outspoken judgement?

Those surfers you’re cursing might have all walked to the beach. One might even be a stressed ICU doctor who’s spent all morning treating patients. Those people sat in a group might all live together. Maybe one of their relatives has just died and they’re unable to attend the funeral. Maybe that guy out for a long bike ride really needs it to maintain his fragile mental health.

Secondly, while today it’s the cyclists, the sunbathers and the surfers, are you sure that tomorrow it won’t be you that the mob turns on?

Because who can honestly say they live a morally impeccable life where nothing they do ever endangers the wellbeing of others or themselves? (The Hastings surfer debacle taught us that nowadays, self-endangerment is cast as the pinnacle of moral failure.)

Many have accused those partaking in supposedly risky outdoor activities of being selfish, because of the valuable public service resources they would take up should something go wrong.

To take this point to its logical conclusion, you might ask why the public has not yet rounded on anyone who didn’t immediately curb their dangerous self-indulgences when all this began. Reckless drivers, smokers, binge-drinkers. Surely these people stand a much more real chance of ‘selfishly’ taking up a hospital bed that could otherwise go to a Corona sufferer? Why is social media not alight with photos of them, rather than surfers and cyclists? Perhaps tomorrow it will be. But please, let’s hope not.

Instead, why don’t we let the police do the policing and, rather than cast judgement on strangers, take steps to help each other as we all struggle to navigate these unprecedented times.

You might argue that your online tirades are helping enforce a social order that will save lives, save NHS resources and ultimately contribute to the speedup of this whole sorry affair. But we’ve still got to live in this society when all of this is over and the more we attack each other, the more fractured our communities will be when we come out the other side. And surely, deep down that’s something none of us want.

Cover photo: A small group of surfers enjoy a socially-distanced surf on the second day of national lockdown. Photo @lugarts

For a debate on the ethics of surfing during the lockdown, check out the latest episode of our monthly podcast It’s Not The Length here, or wherever you get your on-demand audio.