Home » The Curious Case of Diego Garcia: A Tropical Paradise With A Dark History

Despite hosting incredible waves, surfing is illegal on the island. However, due to a case currently being tried in front of the International Court of Justice, change could be on the way.

Seven hundred and twenty-seven miles south of the Maldives, rising just meters above the undulating waters of the Indian ocean, sits a cluster of tropical atolls known as the Chagos Archipelago.

Despite the islands’ proximity to some of the world’s best-known surf and honeymoon spots, the archipelago is largely unknown outside of military and conspiracy theory circles. Located due west of South Sumatra and east of Mauritius, the Chagos unsurprisingly host their own selection of pumping waves. However, there’s a reason you’ve never heard of anyone surfing there. 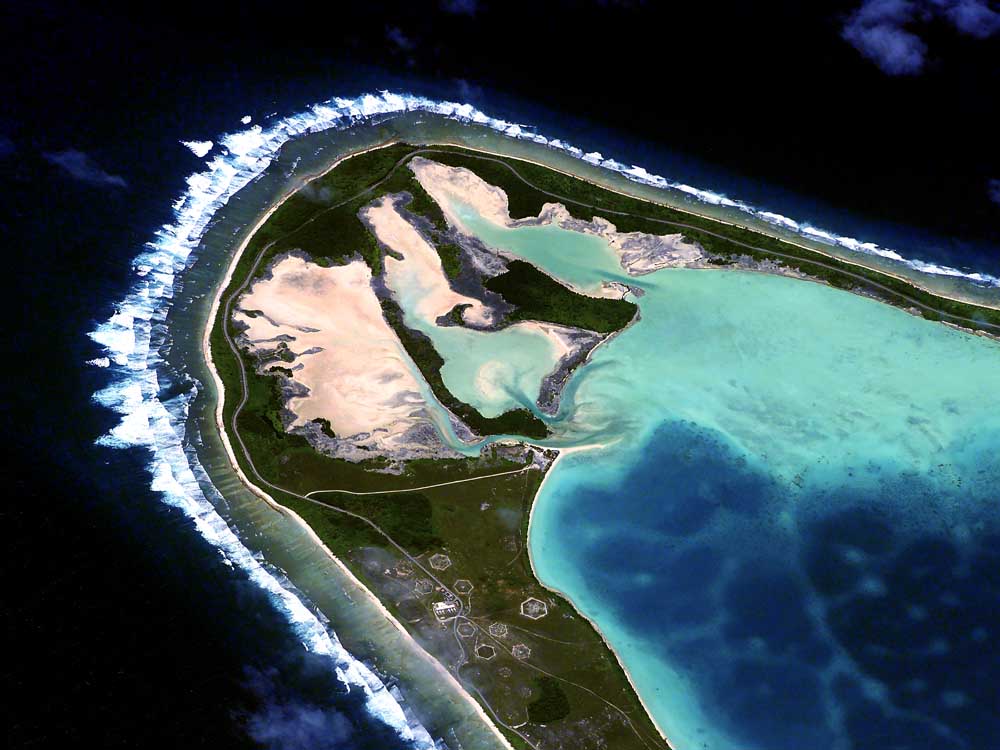 For centuries, the archipelago hosted a tropical island community like any other, comprised of Creole people living in fishing and farming communities. The land and sea produced more than enough for the residents and by all accounts they were content.

In the early 60’s secretive talks began between the US and the UK governments about setting up a joint strategic military base on the largest of the atolls, called Diego Garcia. At the time, the Chagos were categorised as one of the “Dependencies’ of the British Colony of Mauritius. When, in 1965, Britain awarded Mauritius its long-fought-for independence, it stipulated that it would be retaining ownership of the islands as part of the deal. After a cool £3 million was offered to Mauritius to smooth negotiations, the deal was done and the islands declared ‘British Indian Ocean Territory’.

A heavy-handed eviction of the Chago’s 2000 or so residents ensued. As part of the clearance, the US Navy also rounded up and gassed all of the island’s dogs, some of which had reportedly been kept as pets by the islanders. By 1971, through a mixture of fear and force, all the natives had been loaded aboard ships bound for Mauritius. Once there, they were moved into dilapidated accommodation without electricity and running water. The British and Americans immediately began work on a giant shared military base on Diego Garcia, ploughing through pristine island habitats and desecrating coral reefs to make way for a network of runways and military barracks. 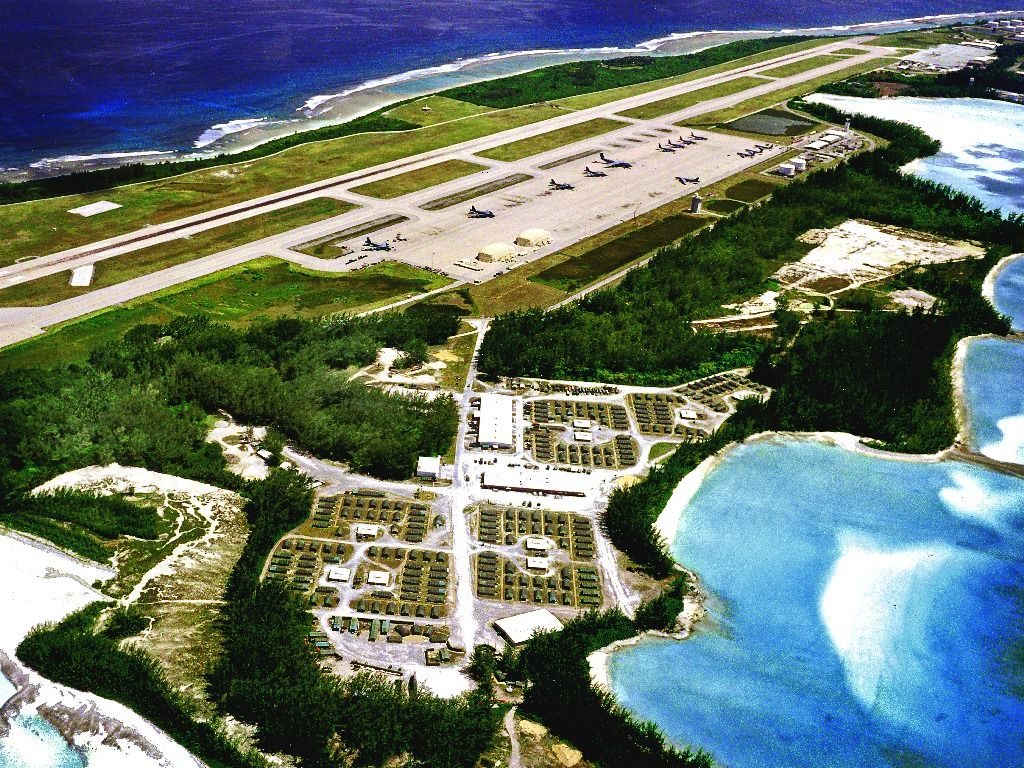 In the years since many have protested the plight of the native people and demanded they be allowed to return to their homeland. In response, the British and American governments have carried out a series of political sleight of hands in an attempt to keep hold of what has become an extremely important air base, strategically placed within striking distance of the middle east.

First, they offered small compensation packages to the displaced islanders, which, un-be-knowns to many of the non-English speaking Chagossians accepting them, contained within the small print a waiving of their rights ever to return.

More recently in 2008, the British government signed off on the creation of a marine protection zone around the Chagos, ensuring the residence would not be allowed to fish, should they ever be allowed back. Although this sounds like a wild conspiracy theory, various leaked diplomatic communications confirm the government’s ulterior motives. In one, dated May 2009, A British Foreign Office official tells the US government that the creation of the reserve would “effectively put paid to resettlement claims of the archipelago’s former residents”.

While environmentalists celebrated the creation of the zone initially, many have rescinded their praise after reading the leaked cables. Now, campaign groups such as Greenpeace claim that their priority is seeing the islanders returned, alongside the implementation of ‘a joint management plan for the marine reserve that includes the zoning of some areas to enable sustainable subsistence fishing.’

Perhaps if such an eventually ever did occur, the introduction of carefully managed surf tourism, like in the islands of Papua New Guinea, and Morotai in the Maluku Islands, could form part of the plan for enabling the island communities to flourish.

For at least the last 60 years Diego Garcia’s beautiful waves have gone largely unridden, as surfing, and indeed entering the ocean on the sea-ward side for any reason, have been strictly off-limits for the military men stationed there. Although this hasn’t stopped a few stir-crazy soldiers trying their luck. 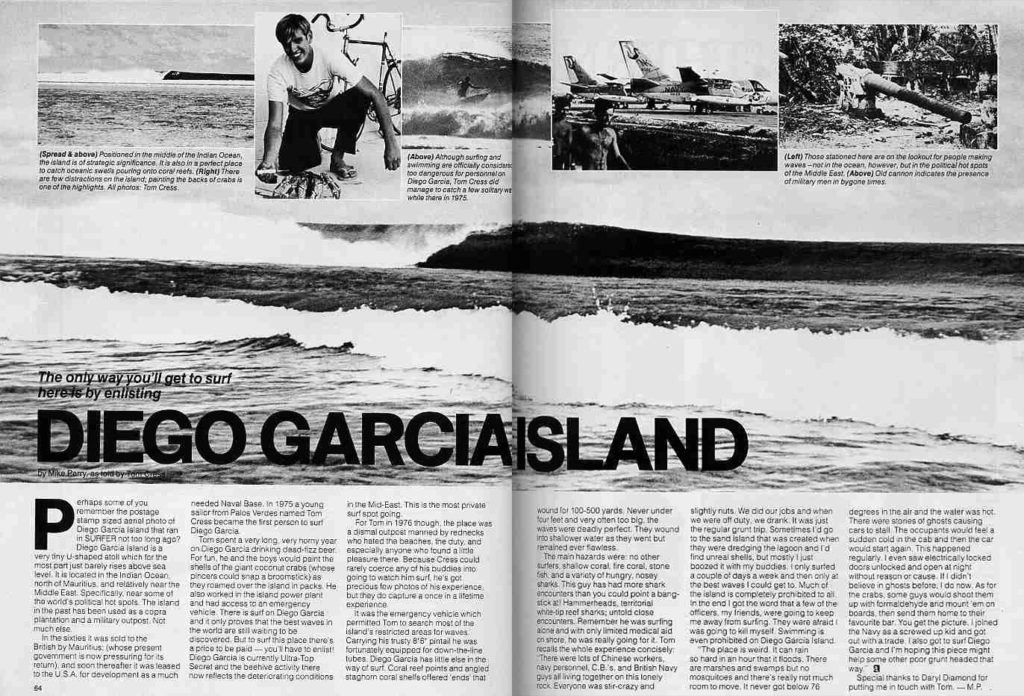 A young sailor named Tom Cress from Palos Verdes in Florida was reportedly the first to have a crack, after being deployed to the base in 1975. Back then, Diego Garcia was a pretty miserable place to be holed up. It was unbearably hot and humid and, according to a 1981 article in Surfer Magazine, was manned mainly ‘by rednecks who hated the beaches and anyone who found a little pleasure there.’ For the most part, all there was to do was drink flat beer and paint the shells of giant crabs while trying to avoid getting snipped by their giant pincers. One day, Cress got access to an emergency vehicle and from there he began exploring the island’s surfing potential. Somehow, he’d managed to smuggle his 8’6 pintail out there (we’d find this tricky to believe were it not for the images featured in the original article above) and he spent his year finding fun down the line tubes to jam it into. Unfortunately for Tom, he wasn’t able to coax many mates out into the lineup to join him, largely due to the abundance of hazards that lurk between the fast-breaking waves and the shallow coral reefs, including an array of hungry sharks, sting-rays, and stonefish. And of course, the the limited medical facilities on land should you come to blows with any of them. 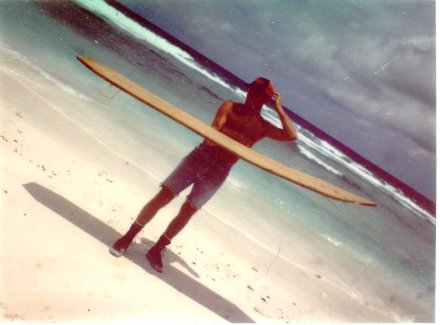 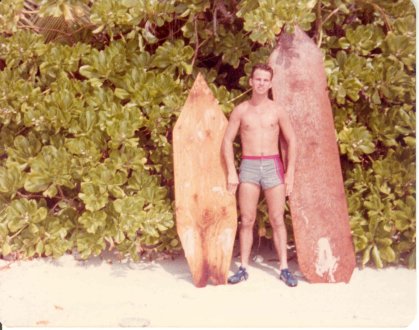 An unknown military man and a pair of wooden boards, made on the island. Photo Scott Brown. Source: PPDRDG 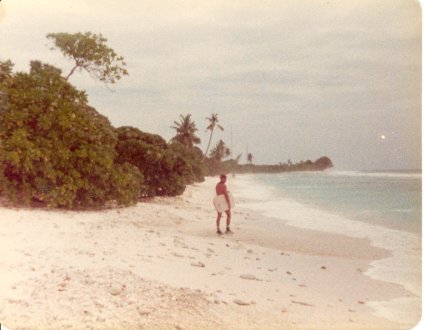 A search for the peak. Photo Scott Brown. Source: PPDRDG

However, in the years since, a few other stories and images have emerged of intrepid servicemen taking to the waves, often on craft fashioned themselves on the island. Nowadays a wider array of activities are encouraged by the Morale Wellness and Recreation unit, but surfing is still prohibited and is certain to remain so while Diego Garcia is still a Military base. What is less certain though, is just how long that will be.

In the first week of September, the case to have the islands returned to the displaced residents was brought by Mauritius to the International Court of Justice (ICJ) in The Hague. In response, The British foreign office has continued to insist they’re not giving them up, at least not until they’re good and ready.

“While we do not recognise the Republic of Mauritius’s claim to sovereignty of the archipelago, we have repeatedly undertaken to cede it to Mauritius when no longer required for defence purposes, and we maintain that commitment.” said a spokesperson. Mauritius, however, is losing patience and has set about gathering support from around the world to put the pressure on. 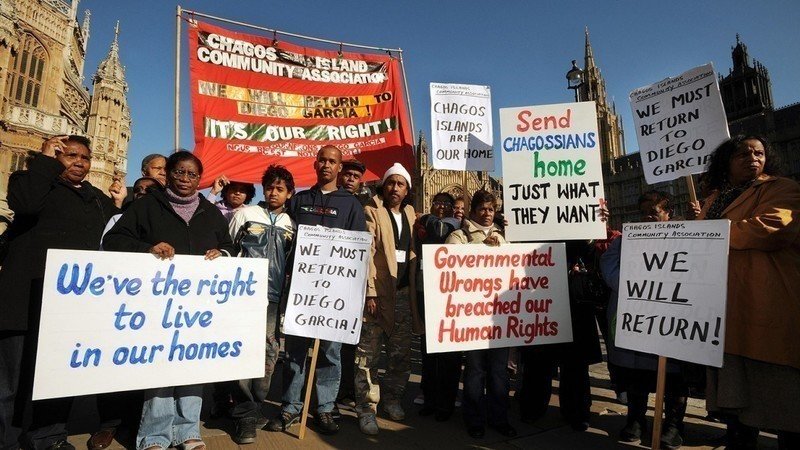 The Chagos Island Community Association at a protest. Source: Change.org

While diplomats and politicians fight a war of words on the other side of the world, The Chagossians wait, hopeful that they will one day be allowed to return to their lands.

And perhaps, if that day comes, the waves too may finally be allowed to be explored.

More stories from around the surfing world:
Five Private Islands With Pumping Waves You Can Buy Today
Secret Spots: Five Countries You Never Knew Had Waves
Watch A Short Film Documenting The Only Known Surf Trip To Pakistan
The Faroe Islands Is An Adventure Sports Paradise, And It’s All Down To Their History