The Story Of One Man’s Attempt To Build His Own DIY Artificial Surf Reef Ever been tempted to have a crack at building your own artificial surf reef? Here's the story of a man who did just that...

Last weekend, we re-posted a story from last year which asked if, in light of a promising new artificial reef design, it might be time to re-launch the campaign to get one installed in Newquay bay.

Far from garnering overwhelming public support, the article drew much more upset than we’d anticipated. As it turns out, ASR’s slew of failed artificial reefs and the tens of millions of pounds worth of public money they wasted on them has left a sour taste in the mouths of once optimistic surfers around the world. And we get it. Boscombe, Kovalam in India and MT Reef in NZ were all straight up terrible. But, and this is important, just because a cowboy builder fucked up your conservatory, doesn’t mean you’ll never be able to feel the warmth of the sun on your face while sat on patio furniture in your own human greenhouse. Or, put more comprehensibly; there may be a time in the future when someone designs a reef that actually works and rather than putting all of our eggs into the wave pool basket, if that day comes, we should consider welcoming it with open arms.

Among the cascade of demands for us to cease and desist any and all efforts to improve Cornwall’s favourite straight hander, an interesting tale caught our eye. It concerned one Portuguese man’s efforts to circumvent the red tape associated with getting an officially installed artificial reef, opting instead for a more DIY approach. Our interest piqued, we hit him up to find out more. 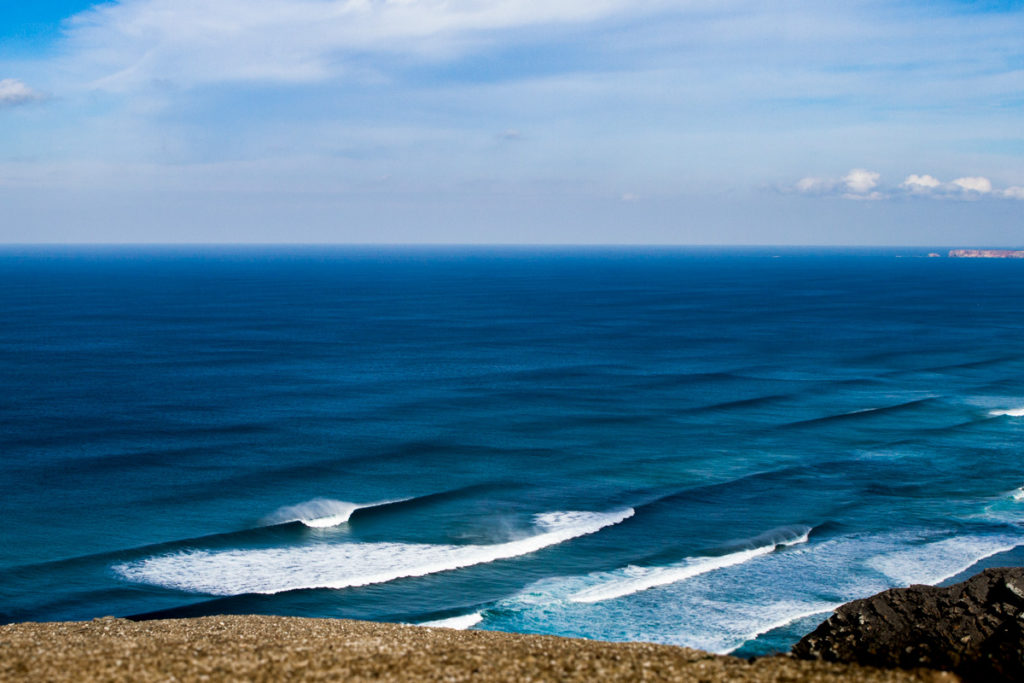 The commenters name was Joao De Melo and he grew up surfing around the Algarve in the early 80’s. Here’s what he told us:

“We knew nothing [about surfing] so everything related to surfing was new.
Along the Algarve coast, swells are rare in the summer months especially between July and August, so as a young teenager you spend your time on the beach doing anything but actually surfing. Time can really drag.
One day, while looking at some old Brazilian surf magazines, I came across an article about artificial reefs. Needless to say, I thought that was the solution to my problem. So after a long afternoon in the sun and several bottles of Sagres, I decided that I was going to build an artificial reef. I approached some other local lads and we decided we were going to build said reef with car tyres filled with concrete. 30 of them.
Shit, that was a mega job, we spent probably 5 to 6 weeks just sorting the tyres, it was monumental. During a big spring low tide we all banded together and put all of our efforts into moving the car tyres to the designated spot. Local fisherman thought were not right in the head. Anyway, by then it was early September and the weather patterns were changing; there were a couple of clouds in sky and a cool breeze from the south Atlantic, which normally pointed to a south swell with a wind that we call Levante, which could produce waves in the region of 2ft to 4ft, if we were lucky!

I woke up one morning and the wind was really strong, unusually strong for that time of year. I ran down my street with all my friends and to our amazement we looked out to see 6ft to 8ft faces, it was going mental! The beach was chaotic with umbrellas everywhere and the lifeguard hut smashed. The waves were amazing! But our artificial reef? Oh dear. There were car tyres all over the beach, pieces of concrete everywhere. Not good. We ended up in the shit with the Maritime Police. Needless to say, we had to clean it all up while the swell was pumping and by the time we finished, it was almost gone. We just managed to surf 2ft onshore little shifty wind swell.

So, artificial reefs? No thanks. Ha, wave pools, that’s another story, but until then, I’ll surf real waves!” 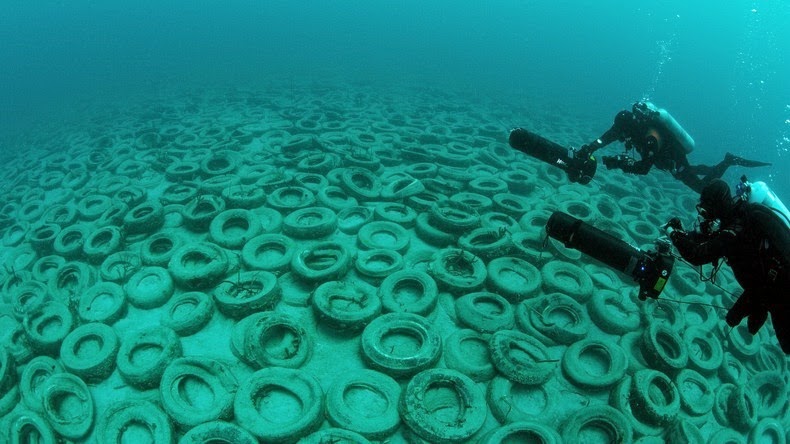 There’s actually a surprising number of cases throughout history where people thought dumping a load of tyres at the bottom of the sea might be a good idea. This is a picture of one particularly high profile example off the coast of Fort Lauderdale, Florida, which was intended to serve as a habitat for sea creatures. Suffice to say it didn’t work and created way more problems than It solved. Photo Mikkel Pitzner, Project Baseline Gulfstream

While we have absolutely no way of verifying this story, like any great fable, factual accuracy ain’t all that important. The main takeaway is this: The number one risk when putting anything in the sea is, sooner or later, it’s probably going to ripped apart by a storm.

The fellas at ASR managed to just about swerve that one in Dorset by installing their reef somewhere with almost no sizeable swell and overall, it actually sounds like Joao’s attempt ended up only slightly worse than the Boscombe surf reef. Presumably, his few dozen tyres filled with concrete also cost a good deal less than the 3 mill splashed out on the bags of sand currently sat gathering algae at the bottom of the English channel.

While we’re still dead set on not throwing the baby out with the bathwater when it comes to artificial reefs, we hope that any future designs can learn from both ASR’s multimillion-pound fuck up and this little DIY disaster from Joao.