[During the Vans Triple Crown, we’ll be bringing you a whole stack of stories centred around Hawaii’s North Shore. You can read them all here]

Presumably, you’ve heard all the Hawai’i cautionary tales. False cracks. Knuckles to da head. “Talk like a man, take a punch like a man” violence visited upon female tour pros in the lineup. Scraps in the toilets. All kinds of beef, mainly surf etiquette related. Rabbit’s teeth knocked down his throat in ‘77. Bong exec ‘G’ catchin one lickin in 2011.

What with all the tough guys, giant surf, shallow reef, sharks, ice heads and myriad of other potential threats to your physical and mental health… it sounds like the exact kind of place you’d want to stay as far away from as possible.

And yet, the lure of the Hawaiian Isles, as the birthplace of surfing and surf culture, as the keeper of the flame, remains as potent as ever – perhaps even more so.

“The lure of the Hawaiian Isles, as the birthplace of surfing and surf culture, as the keeper of the flame, remains as potent as ever”

And whereas every devout follower of the faith is expected to make the Hajj pilgrimage once in their lifetime to the Saudi Arabian city, you bear no such responsibility whatsoever.

You are not expected to travel to The Islands.

You might decide to avoid it like the plague, especially if you eschew air travel for environmental reasons.

You have no obligation to the greater surf community to make the Hawaii trip, you have no burden of duty whatsoever, other than to yourself. 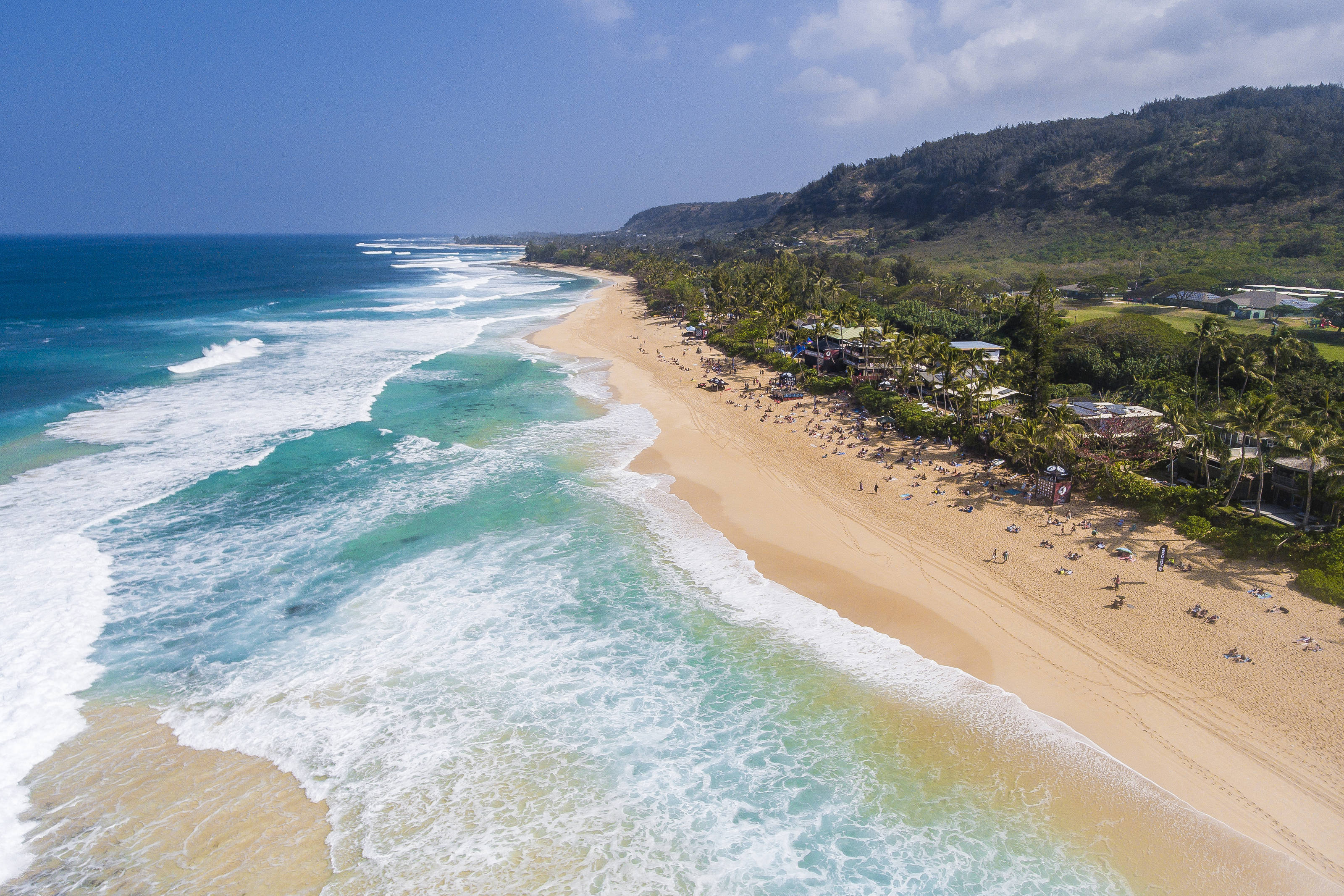 There’s nothing miraculous about the North Shore, quite the opposite in fact. A miracle is a divine conjuring act, a temporary reversal of the laws of physics. A pregnancy without the fusion of sperm and egg, walking on water, turning a few bread loaves into thousands.

“There’s nothing miraculous about the North Shore”

The North Shore and its surfscape, by contrast, is a direct result of the physical laws that govern us, of the omnipotent beauty of the natural world.

Open ocean swell borne from atmospheric vorticity of the biggest storms in the world in the vastest ocean in the world. Fossilised limestone reef, the vestige of once-living coral platforms at just the right depth, with just the right amount of kinks and channels and geometry. A sub-tropical latitude, a micro-tidal regime, an orientation both into the swell window but facing away from the prevailing local tradewinds.

Nothing irrational, unfeasible here. Just the perfect, intoxicating confluence of some of Mother Nature’s most powerful forces.

You could approach your perhaps once-in-a-lifetime N Shore trip as a the fulfilment of checklist of must-do’s, an 808 state ‘bucket list’ (yuck!) jaunt.

Alternatively,  as a search for a higher state of ocean-centric consciousness, an alignment, however temporary, with the cosmic rhythms of the most roaring surfbeat in the known universe.

If you can be on the beach side of the Kam Highway (hardly a highway, just a road with houses on) between Sunset and Waimea, well you’re in the spot there. Obviously being in prime pozzy will set you back more $$$ than if you cross the street and venture a couple of blocks back.

They key thing is transport, for which a bike is ideal. For a short trip you can hire, for longer stays, probably better to buy one second hand. If you need to go to Haleiwa on business, you can bike there in 25 mins, no probs. The bus, which is called The Bus, is known for surly drivers and slow progress, but is probably the cheapest thing you can do on Oahu, at $2.75 one way.

You can even throw the bike on the front of The Bus on the rack. Tally Ho, brah. 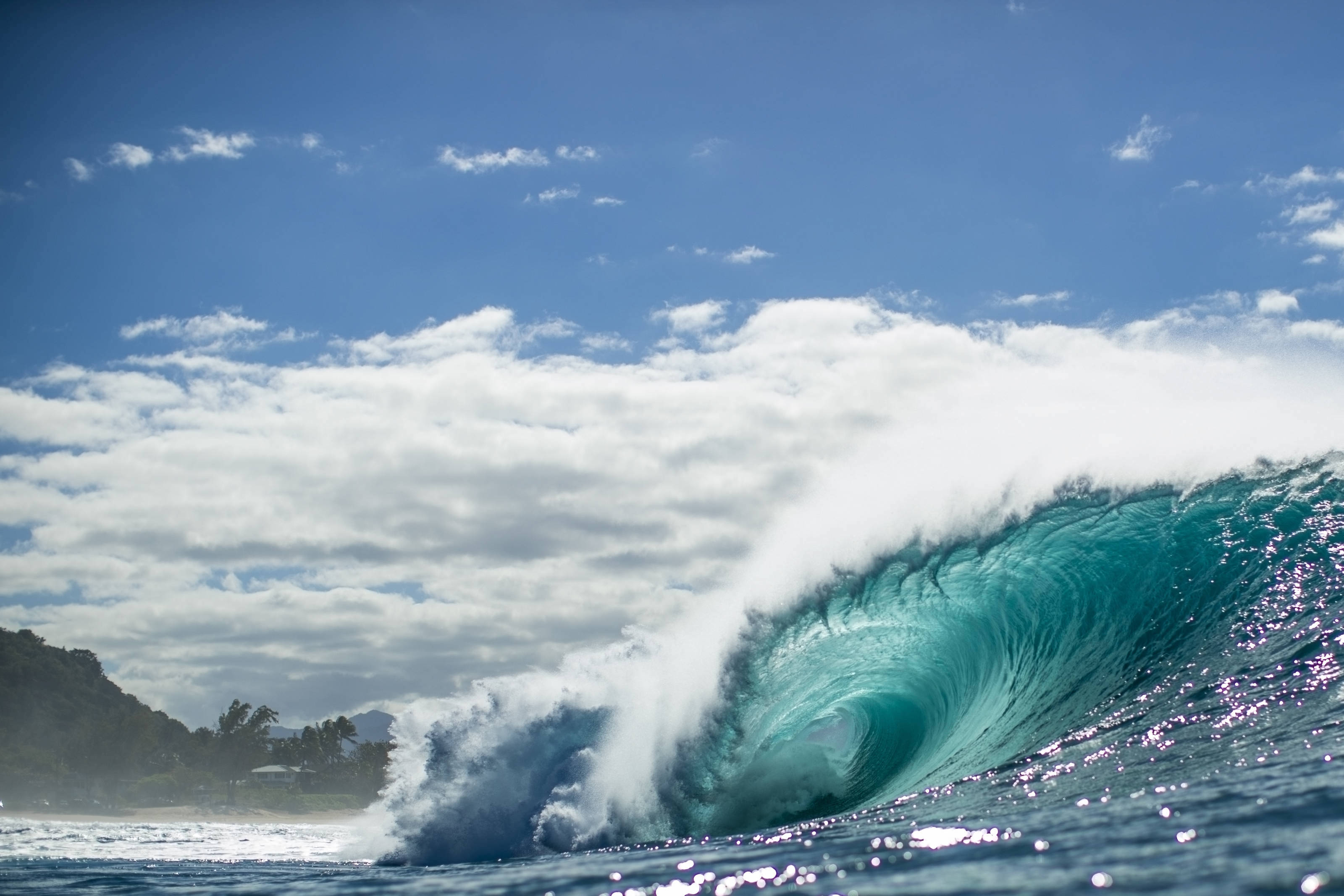 Pipe/Backdoor & Rocky Point are generally crowded beyond all realms of possible enjoyment and not just crowded with bobbing heads, but crowded with absolute rippers surfing to further/save their careers/egos. These are probably best avoided.

Sunset, on the other hand, while requiring specialist equipment, might be your best bet of catching a big wave, anywhere.

Your best bet of rushing across a thick, tall, frightening wall of Pacific water, feeling like you’re going a million miles an hour. Sure, you can pull into tubes, belt lips and rasp rail turns at multitude of places and be more or less anywhere. But there’s no mistaking a ride at Sunset for anywhere else.

At nearby Backyards, you can score Indo-style waves with manageable crowds, if lucky. While spots like Kammies and V-Land, timed right, can offer legit Hawaiian surf experiences without the masses.

West of Waimea, a myriad of spots of varying degrees of gnarl that break out to sea and are thus not favoured by pros and photogs include Jockos, Alligators, Marijuanas, Leftovers… the pick of them all is probably Laniakea, an absolute beaut.

The best thing about a N Shore trip is the chance to surf 3-4 maybe even 5 times a day, especially if you’re staying on the beach side of Kam Hwy.

Logistically, there’re no easier, more accessible lineups in the universe. Regular checks can allow you to slip in and out in between crowd peaks, with the constant perfect temperature only further facilitating multiple shreds.

Night draws in early, and generally, as with many places in the tropics, an early to bed vibe pervades. There’re aren’t really nightspots as such on the N Shore, aside from Haleiwa, and even then, they’re largely missable. You didn’t go to the N Shore to rage on dancefloors. Think more like quiet beers at home, or a N Shore house party, which are generally not to hard to identify.

If you are a toker of the devil’s lettuce, of the Maui wowee, remember: it’s still illegal in HI (unlike CA), but procurement is very easy. Don’t take with.

James A Michener’s Hawaii, the book Rabbit was told to read when in the midst of the Bustin Down The Door trouble will give an excellent background knowledge of the various struggles of the various Hawaiian people. Shoal of Time is a sharp, candid take on Hawaii history post-Cook, otherwise Barbarian Days, while not all Hawaii, has plenty of whet your island appetite, as perhaps will Welcome To Paradise Now Go To Hell – or possibly put you right off the joint, forever.

The Best Things on the North Shore Are Free

Hawaii is a pricey surf trip, it certainly isn’t like going to a SE Asian third world country, living some kind of neo-colonial cliché where services like driving, board carrying, nannying, cooking, cleaning can be tendered out to locals at relative inexpense. Where the European/American visitor can play a kind of putrid, pampered pseudo aristocratic role, paying brown people to perform life’s mundane tasks.

Hawaii requires a significant investment to get to and stay, but beyond that, once there, an excellent time can be had for very minimal outlay. Free, non-wave riding activities include rock jumping at Waimea, there are pretty epic hiking trails up in the mountains if that’s your thing, at places like Crouching Lion on the east side, or snorkelling the reef on flat days. (Snorkel the reef and Pipe on a flat day and you’ll be even less inclined to surf there).

“Hawaii requires a significant investment to get to and stay but once there, an excellent time can be had for minimal outlay”

My most significant Hawaiian oceanic achievement was probably swimming from Sunset to Waimea, on a flat day (shit myself around the rocks at Shark’s Cove for obvious reasons). Sure, the walk back was a bit of a bummer, but I felt like a legend and stopped at every house on the way that I knew people to humblebrag. Hawaii is also an epic place for star-gazing, especially shooting stars. December’s Gemenids meteor shower usually coincides with Pipemasters, coming on 13/14th Dec.

Meanwhile, there are opportunities to forage for fruit, notably passion fruit (or lilikoi as you now call them) in the hills behind the N Shore. Might be able to forage some green coconuts, especially if you walk on the beach east of V-Land, and some of those little bananas.

Despite horror stories, and apart from exceptions, North Shore generally runs on karma vibes. If you don’t commit disrespectful acts, trouble should not be visited upon you. You’re highly unlikely to be set upon for no reason, and the general surfer-surfer interaction be it performing a check or in the water is much more cordial, warm even than elsewhere, especially places like SW France. Obvs don’t drop in or paddle around crew, and if someone fades you, probably best to err on the side of caution and avoid calling them off, even if you are 97% sure they’re Brazilian.