Since it was first surfed in 2007, Riley’s has become one of the most recognisable heavy wave arenas in the Northern Hemisphere; a unique combination of bus-wide emerald tubes breaking onto a shallow platform beneath an imposing Irish cliff line.

Over the last decade or so, waves ridden there have defined careers, broken bones and graced dozens of mag covers and majestic highlight reels. However, the dangers apparent in these images and clips are just a small part of the overall picture of potential perils. 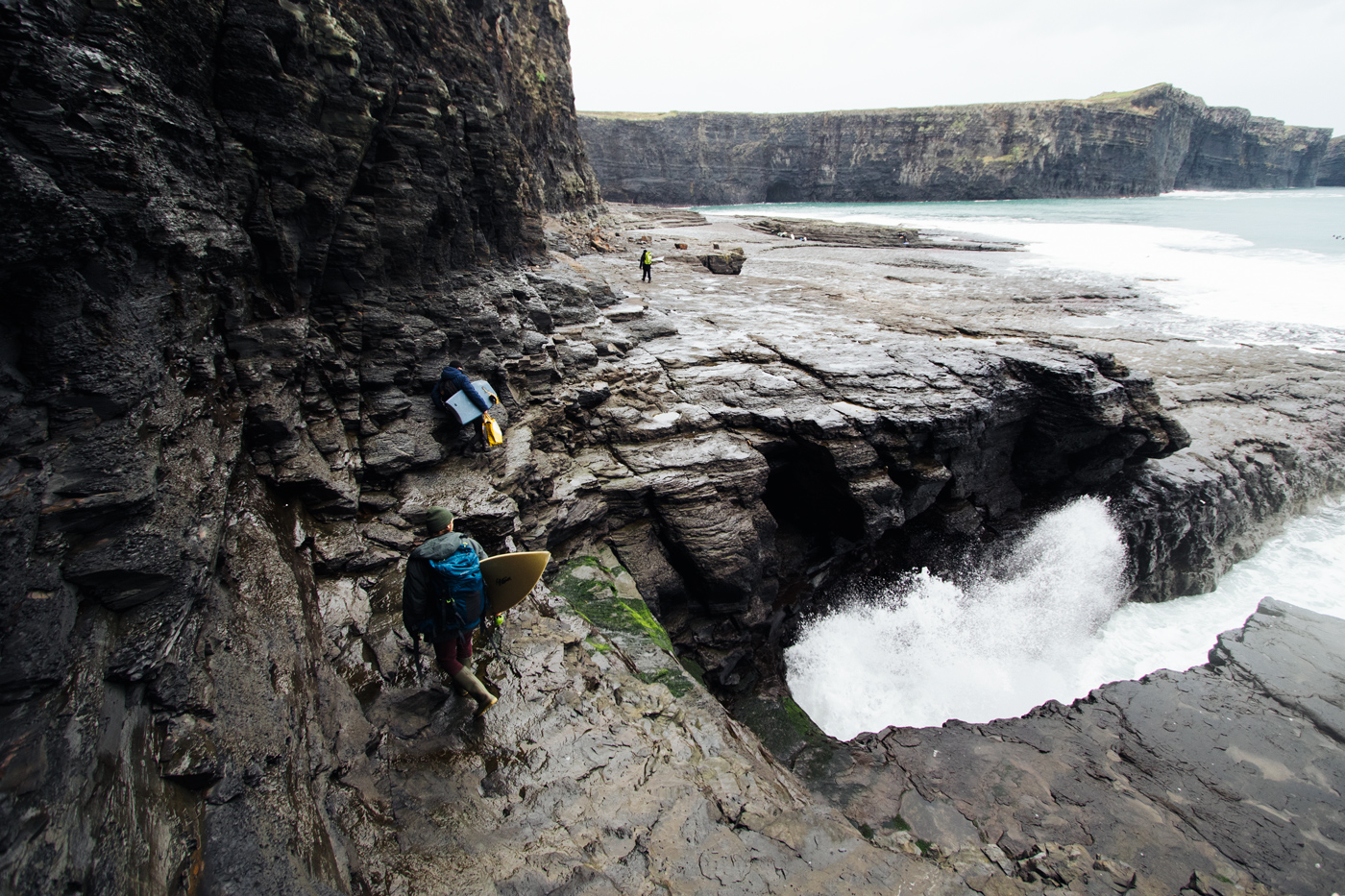 Just to reach the wave, you’ve got to trek across a few hundred metres of absurdly slippery reef, passing under cliffs where football-size boulders often dislodge and clatter down to join you. Then, you’ve got to navigate a narrow ledge – usually covered with a coat of algae and a bonus layer of ice in the dead of winter- with sheer cliff rising to your left and a 10-foot drop down to the hissing swash on your right.

Just to the north of the wonky arrowhead-shaped shelf on which the wave breaks is a narrow cut in the reef that runs all the way to the base of the cliffs. After each set deposits several cubic tonnes of Atlantic up the slab, it drains off into this channel and rushes back out to sea. Imagine a set of river rapids, covered by a thick layer of seam foam and you’ve got something close. Then on the other side of this gap, there’s an almost dry ledge that focuses all the swell’s energy into a straight whomping closeout that looks, in conditions over about four foot, like if you got caught in its maw, you’d probably never come out.

This is the story of what happened in 2014 when Irish charger Ollie O’Flaherty ended up in there.

“I was towing on a really big raw, day with a building swell,” he begins. “It’d been an epic session. Me and Tom Lowe had had about five bombs each, but the sets were starting to get out of control. I decided to be greedy and get one more.” As a wave approached, Lowey pulled the throttle and whipped Ollie into position. “It looked kinda like a closeout,” he remembers, “but I thought I’d take my chances and see if I could backdoor it.” The wave had other ideas. After a quick vision, the foam ball bucked Ollie off, snapping his board and rag dolling him across the slab.

Usually, after a wipeout, you either get pushed up onto the land or, as Ollie explains, if you roll into the ravine, you generally have just enough time to get your shit together and set off back towards the peak before the rip carries you too far out. However, with only half a board attached to his leg, Ollie found himself stranded.

“I was in this crazy situation where the foam was 2ft high on the water and I had to hold my breath in the gully getting smashed off the sides,” he remembers.

Watching in the footage below, you see him appear, looking a little dazed as he rides the rapids, around the 0.18 mark in the bottom left of the screen. Then, after the clip cuts, you see him pop up, surrounded by seafoam, as he tries to pull his snapped board under his body and paddle back towards the peak. Then, just a second later,  he’s on the horror slab, staring down the barrel of a 10-foot closeout. It’s not until he stands up that you get a sense of just how shallow it is in there.

“I don’t know how I managed to survive that one with so few breaths,” he says. “But somehow, the third big closeout blew me back across the gully and onto dry reef where Tom [Gillespie] and Patch [Wilson] helped me up the rocks.”

“I’ll never forget Tommy G hugging me. That’s the closest thing to death I ever experienced and I have had some heavy wipeouts over the years.”

Miraculously, on this occasion, Ollie escaped without any major injuries. “I was sore for a few weeks from slamming the reef but otherwise just shaken,” he said.

And, while he’s continued to whip in on solid days at the spot in the years since, the experience did cause him to refine his approach a little. “I try to not surf there if there’s a really big period swell that’s on the increase,” he explains, “there’s just more chance of sets with 5 or 6 waves in them.”

“And the other thing is just wave choice and not being greedy,” he adds, “if I see a lot of disturbance from the previous wave I’ll pull back and do a loop. Because there’s always another wave.”