Home » Back In The Saddle; The Return of British Charger Taz Knight

Back In The Saddle; The Return of British Charger Taz Knight After several years out of the water with a crippling injury, young British charger Taz Knight took his first foray back into waves of consequence last week at Mullaghmore. We caught up with him to find out more...

Throughout his younger years, North Devon’s Taz Knight forged a fairly typical path for an aspiring British pro-surfer, popping airs in 2-foot beachies with a sticker covered board and working his way through the junior ranks of the UK comp circuit.

However, as he broke free of the U16’s, his attention started to shift away from the competitive grind. Whether it was the influence of his sea-faring family and their annual trips to Ireland, or the encouragement of local mentor Andrew Cotton, by the time Taz hit his late teens, his interest in surfing was focussed firmly on surfing big, heavy waves. As soon as he turned 18, he set off on a solo mission to Mexico and the US, determined to try his hand at the regions world famous spots including Mavericks, Todos Santos and Puerto Escondido. By the end of his trip, he had a smattering of successful sessions logged at each, a viral clip and a shout out from the WSL Big Wave Awards for a wave he caught at Puerto. 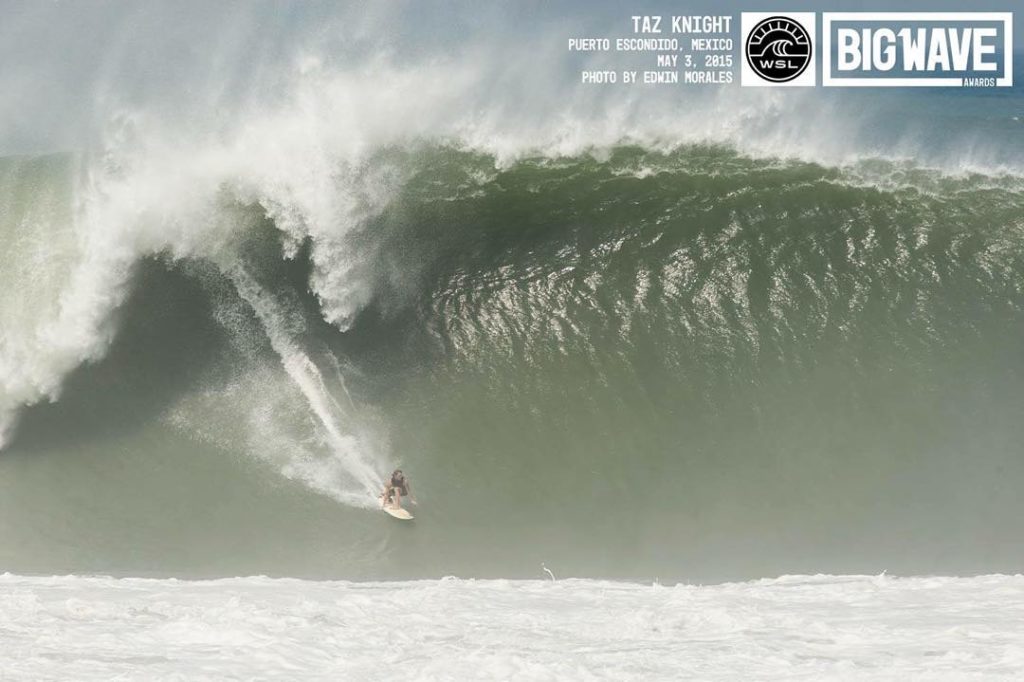 It was 2015 and sponsorship was hard to come by, so being a level headed and realistic sort, Taz headed off to Bristol uni to study Physics. It was suitably located, he figured, within easy reach of several international airports and the ferry to Ireland, allowing him to jet off on surf missions alongside his studies.

Everything was all going swimmingly until the summer of his second year.

It was early September, and Taz was on his way back from a trip to Morrocco when he decided to squeeze in a quick session at one of North Spain’s premiere heavy waves before hopping on a ferry home.

The night before it hit, Taz was burning off some pre-swell nerves with a couple of runs around a beach car park skate bowl, when he hit the concrete and tweaked his knee. At first, he thought it was just a fracture, however, when he got home the doc informed him he’d snapped several of his major ligaments. He was left on crutches for six months and out of the water for a further nine.

“It was actually sort of a blessing in disguise” he reflects, three years on from the incident. “because I was going into my second-year uni at the time and instead of spending the whole time surfing I could actually sit down and do some work.” 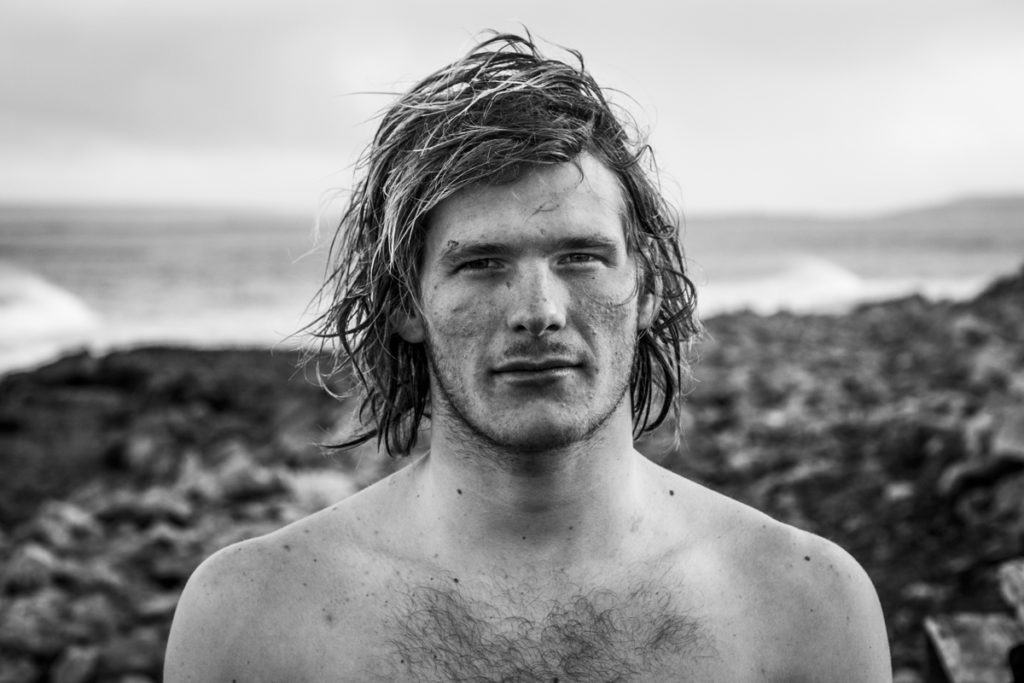 Taz after a heavy session in Ireland. Photo @lugarts

Last June, Taz finished his degree and on the night of his graduation, whipped off to join the rest of his family on the support boat for Ross Edgely, who was mid-way through his swim around the entire circumference of the Britsh Isles. That lasted until October, and while he managed to fit in a few surfs along the way, it’s been over three years since Taz has surfed what he’d describe as waves of consequence. Last week, he finally found himself back in the lineup as one of the biggest swells of the year so far adorned the reef at Mullaghmore. We caught up with hit to find out more about the session and his plans for the future now he’s finally over his injury:

Hey Taz, are you back in North Devon now?

Well I’m actually moving out to Ireland, which is quite exciting. I bought this little ruin on the beach in Bundoran, right in front of the Peak, so I’m just going to be living in my van and doing that house up for the next year or so. I’m going to get an evening job and do some maths or physics tutoring, or just work in a pub or something and then just build and surf during the day.

Did you ever think about going straight off into a job involvingphysics?

Well, the problem is, it would be good fun but it would mean I would have to give up on a career in surfing. I don’t necessarily want to be a pro surfer or have a full career out of it, but I still want to be surfing as much as possible and getting waves whenever I can. Locking down into a really serious job like that where you’re working all the time is not something I want to do right this second. In the future I might do something with computers, I’m quite interested in the weather modelling side of things, it could be quite interesting to go into surf forecasting or something like that. 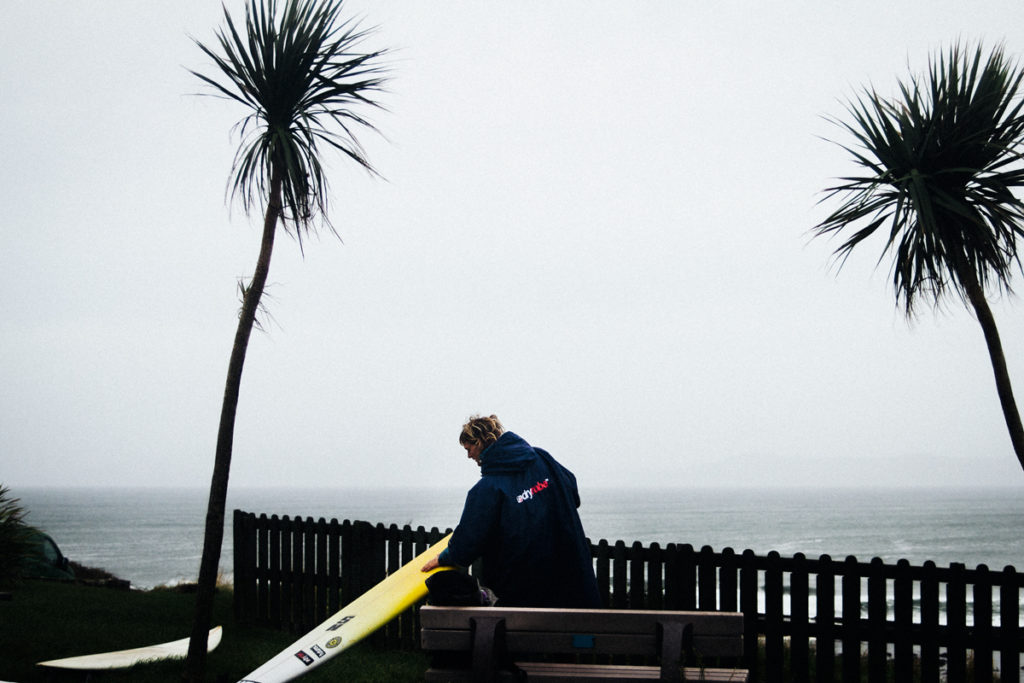 Have you just been waiting the whole time you’ve been out of the water till you can get back to surfing big waves?

I’ve heard the way a lot of guys get themselves over the ledge on those big days is just not think about it, is that the case with you?

There is an element of not thinking involved, but actually, I think quite a lot, but more about what wave I’m going to get, rather than thinking while I’m going for the wave. So I’ll do a lot of preparation, I’ll sit out and watch the waves come in and make sure I’ve properly identified the ones that will be makeable and I know I’ll be able to actually surf. When I actually see that wave, there’s no thinking involved. It’s just full reflex mode; head down, paddle, pop up, surf the wave and then think about what happened after you’ve kicked off.
If you think about the wave while you’re paddling for it it can lead to hesitation and that’s the most critical thing not to do when you’re going for a big wave.

Does surfing with a whole load of other really good big wave surfers make that a whole lot more difficult?

Yea, it does really especially since people don’t really know who I am, so if I’m out at a big wave spot I’m one of the supplementary surfers. When I’m out at Mavericks for example, it would be impossible for me to chose what wave I want, because all the guys who are the big names will be getting all the waves, so it does make it more difficult to take off on the perfect ones. But at the same time, it’s not quite like surfing small waves, where you get a lot of snaking, so as long as you sit and wait your turn, you will get the opportunity.

How did you end up surfing Mully last week?

I actually wasn’t planning on surfing at all. I’d gone out there because I’m moving out there to do this house, but I knew the swell was going to be really good, so I drove up there with all my big boards. I was sort of umming and arring because I wasn’t 100% ready. I hadn’t been doing all of the breath training and stuff like that which I normally do. But I’ve surfed Mully quite a few times, and I’m quite comfortable out there, and I was quite confident I could be safe. When I got to the point and saw it was pumping and all my mates who I’ve known for years who surf there all the time were out there. I thought I’ve got to paddle out and see what happens.

I was stoked, it was the best surf I’ve ever had at Mully. It wasn’t really a paddle day- it was a bit big, the period was a bit long, it was hitting the shelf really hard, so there were loads of amazing tow waves ridden but there weren’t that many people paddling out there. So it meant I could sit on the peak and there wasn’t any hassling. At most, there were about 5 guys paddling. When I first paddled out it was just me and Jesse [Davies] from the north east. Then there was a brief spell where everyone paddled.

That’s pretty lucky, I’ve heard it can get super busy out there now…

Yea, this was just quite an unassuming swell I think. I mean, there’s a strong local crew who are absolute legends, and the same with the guys who run the safety skis- and they surf it whenever it’s on/. But there were only a few guys who’d flown in. So it wasn’t really that busy, which was nice. Lowey was absolutely charging- he was paddling, sat right out on the peak getting the super gnarly heavy ones that no one really wants, just going over the falls, he got so many wipeouts it was mental.

What’s it like paddling when there are people towing? Because a few years ago that was a real point of conflict.

Well luckily most of the guys that tow out there are the local crew and they’re all really great and respectful. What happens out there- because you can only paddle it at low tide, but you can tow it all through- is that people will tow all day and then there’ll be three hours in the middle of the day at low tide when everyone will just paddle and they’ll stop towing completely. So it works quite well like that. And also, the paddle ones you want are different from the tow ones- because the tow ones come in and hit the shelf really heavy and go square and you can’t paddle those anyway, whereas the paddle ones hug the point a bit more and then cap on this little boil out back where you can take off- so normally the tow guys leave those ones for the paddle guys. 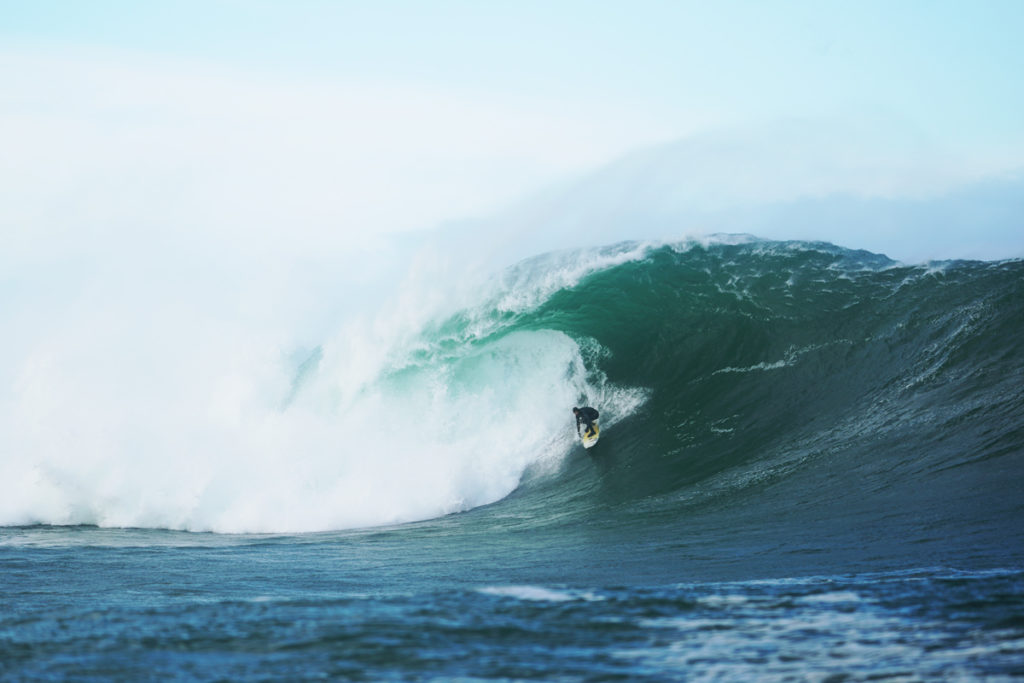 Taz reaching for his rail during a pocket ride at Mully last week. Photo @garymccallphoto

It sounds like it regulates itself pretty well, because you’re going for completely different waves and everyone out there kind of understands that.

Well the key is that everyone out there kind of understands that. It’s very rare that you go out there and there’s somebody surfing it for the first time, it’s usually a strong local crew who know it really well and the guys who come over quite a lot.

While you’re living out in Ireland is your focus going to be on scoring big days?

I don’t really know how committed I’m going to be yet, obviously, I love big waves and I love surfing, and I do want to make it part of my life, but it’s also really difficult, not that financially viable and a big commitment. So, what I’m basically going to do is move out to Ireland, live out there and surf whenever I can, and if that means I’m chasing a swell down to Alieens, or Mully then that’s what I’m doing, I’m just going to keep doing it and keep loving it and keep enjoying myself.

Thanks Taz, we look forward to seeing you out there.

I would invite you to stay but I haven’t got any windows yet. (laughs)