Home » A Review: Cocaine And Surfing By Chas Smith

A Review: Cocaine And Surfing By Chas Smith

We read Chas Smith's new book 'Cocaine & Surfing' which attempts to unravel the sordid history of surfing's greatest love story. This is what we thought:

One hot summer’s afternoon I sat reading Chas Smith’s new book ‘Cocaine and Surfing’ on a Cornish cliff top, gazing down on a well known stretch of smugglers coves, marvelling at the pertinence of my reading perch, as I reached a chapter about smuggling.

Then, the night before I sat down to write this review, I heard the news of a Newquay surfer, well known in the local community, who’d been caught sailing in the Atlantic with almost two tons of cocaine stuffed into the hull of his boat.

Wow, I thought, what serendipitous magic is this.

Quickly, it dawned on me. None of this was coincidence, but instead a vindication of the central premise of the book; cocaine and surfing, past and present, are inextricably interwoven.

From the days when Peruvian fisherman would surf their fishing boats in, cheeks filled with Coca, to the drug money that bought a major surf brand and funded the discovery of G-Land, cocaine has been an ever present dust cloud, hanging heavy over the surf world.

In the book, Smith sets out to delve deeper into this untold ‘love story’ than any before him, examining the key moments where surfing and cocaine’s historical axis cross, recounting anecdotes from his own time in the industry and sitting down with some of the love story’s key protagonists.

In another life Smith travelled through the Middle East, writing serious stories about serious matters, before ending up kidnapped by Hezbollah in Israel. It was this experience which presumably endowed him with the ability, which shines throughout the book, to see surfing and surfers in all their triviality. 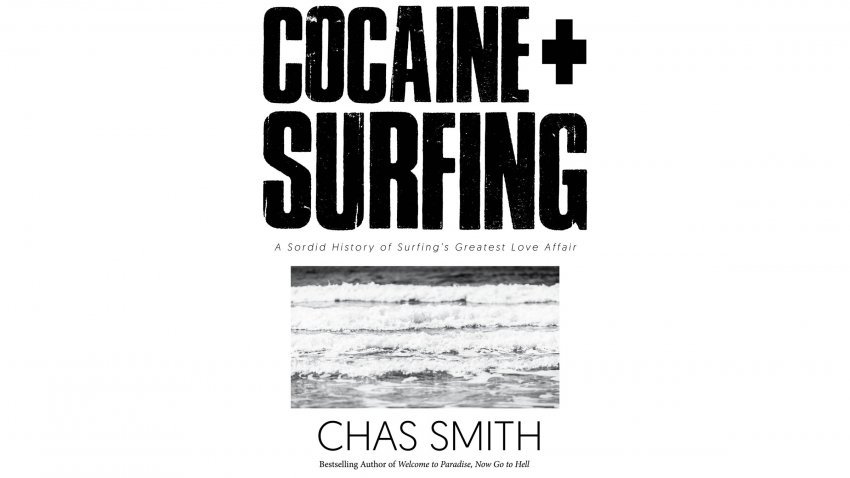 As with all of his output, including the time he tried to choke the editor of Stab live on a podcast, Smith’s professed aim is to attack the all consuming conservatism that plagues the surf media.

He blames this conservatism not only for making surf storytelling boring, but also playing a role in the untimely demise of Andy Irons. If industry insiders hadn’t glossed over his problems and encouraged him to not go public, according to Smith, he would have been much more able to get the help he needed.

It’s somewhat of a slap in the face to traditional journalistic convention, and not in a good way.

Chapters full of genuine insight often slip into extended periods of self-reflection, conducted through a half cut haze, infused with showboating and usually culminating in existential crisis, as Smith frequently concludes the premise of the book an unworthy one. For the most part it’s entertaining enough, although occasionally wears a little thin.

However, as we enter the final chapters, Smith’s quest to leave no stone unturned suddenly buckles as he finds himself unable to swim against the vicious tide of industry secrecy.

The buckle begins with him wondering aloud whether there is a drug-fuelled scandal unravelling right now under our noses in the world of professional surfing. After many long passages filled with moral wranglings on the pros and cons of blowing it open, he concludes that no, it isn’t his place. He can’t get anyone to go on record. He can’t justify it and he will probably get sued the shit out of.

It’s somewhat of a slap in the face to traditional journalistic convention, and not in a good way. Telling readers you’ve got a story which you’re not allowed to tell might work fine for a Beachgrit article, but It doesn’t hold much merit in a published work of literature.

Aside from that, it’s an entertaining and insightful read and we’d recommend getting a copy– if only for its historic significance. Because if the story he’s not telling goes bad, we presume future renditions will refer to this book in much the same way as Smith talks of those who knew, but did nothing, in the case of Andy.

You can buy Cocaine & Surfing on Amazon here, or as an E-Book here.