How did one random act of kindness lead to a series of films that defined an era of surfing?

In a recent conversation with surf journalist Jake Howard, published on Stab Mag, surfing luminary Ross Williams reflected on how a kid in a rusty van, parked down an unassuming street on Hawaii’s North Shore came to define surfing in the 90’s and re-shape the sport as we know it in the decades since.

To watch the incredible story play out in full join us on our UK screening tour of Momentum Generation.

It all began in the winter of 1989/90 when Taylor Steele first wound up camped outside Benji Weatherley’s house on the North Shore of Oahu. He’d travelled out there to surf and film his friends, but a chance encounter and a random act of kindness by Benji’s mum saw him invited in for dinner one evening, where he found himself in the presence of some of the world’s most talented up and coming surfers, who flocked to Weatherley’s house each winter. Among them were the likes of Dorian, Machado, Ross Williams and of course, Kelly Slater.

Kelly Slater on the way to his very first win at the 1990 Body Glove Surfbout. Photo: Quiksilver/Balzer

Slater ‘was the exception to all exceptions’ Ross Williams tells Jake Howard.

“No doubt the East Coast has a great surf scene,” he elaborated “but it’s no secret that Kelly had to motivate himself at a very young age to keep improving at the pace only he seems to be familiar with. I’m sure Kelly pulled a lot of motivation from his peers, but what really set him apart from the rest was his brain. He was able to think and translate his thoughts into his surfing. This is the kind of behavior you see in adult athletes at present day, not children of the ’80s. While most of us were watching all those videos with our hearts on our wetsuit sleeves, Kelly was actually calculating what was going on in the technique and how he could import those lessons into his surfing.”

“Sure, we all already knew each other for a few years prior,” reflected Williams, on the Momentum crew. “But this house was the place that allowed us to hang out together for hours upon hours, days upon days, and weeks upon weeks.” Up until the late 80’s, they’d just been a ragtag group of young surfers, mostly from broken homes, trying to transition from successful junior careers into the higher ranks of pro surfing, but just as they met Taylor Steele, everything began to change.

“It seemed like that winter the waves were good almost everyday.” Remembers Williams. “We surfed in front of Benji’s house with Taylor filming. And before the winter had ended we all made plans to come hang out with Taylor in California that next summer and shoot more video. Luckily for us Taylor’s parents were on board and were all right with him inviting a bunch of kids to stay at their house. How could we ever have dreamed that the clips he filmed would go into one of the most iconic films in our sport, Momentum?” 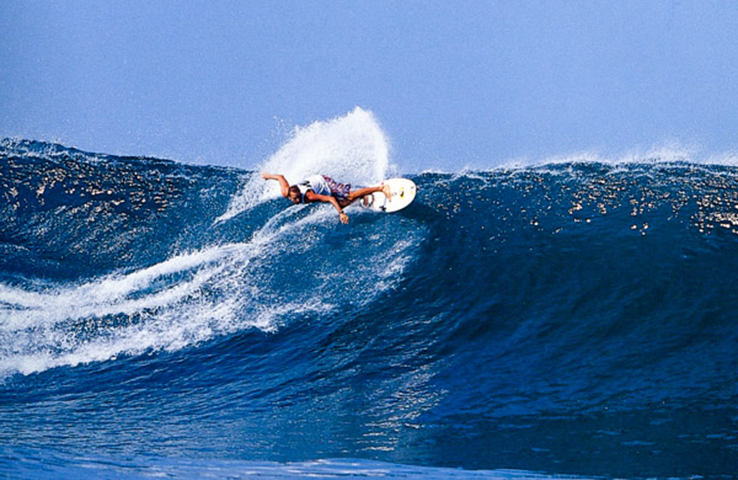 “The videos, the competition and camaraderie were the potion that made us who we were as surfers. Careers that unfolded were no accident. I think if you could label our generation with one word it would be ‘motivated,” said Williams. “We all were so passionate about surfing and wanted so badly to make it our life.

“If I could pass one thing along to the kids coming up these days it would be to surf with passion and conviction. More importantly, I’ve learned that when you become a professional surfer you need to realize that you are extremely lucky and fortunate to be able to call surfing your ‘job.’ It’s an art form, but it’s also a legitimate sport that we as surfers are obviously very proud of. Don’t take it for granted. I know I would have taken my career more serious if I had those values instilled in me.”


Join us for a screening of Momentum Generation on our UK tour, with tickets still available for Newcastle, London, Bournemouth, Exeter, Bristol, Newquay, Edinburgh, Worthing, Ilfracombe & St Ives. Grab yours here. Or find out more about the film here.