Home » Surfing in 2019: Bold Predictions For The Year Ahead

Surfing in 2019: Bold Predictions For The Year Ahead What’s in store for environmentalism, big waves, progression? Find out!

A brave new year in surfing is upon us. What exactly it brings in terms of surfing opportunity to you is still uncertain. Atmospheric vorticity, tidal ebb and flow, local sea states and perhaps above all, your own day to day lifestyle choices, along with a multitude of other variables will all come into play, meaning your surfing fate is fickle. It’s in the wind, literally.

However, there are other things that can be counted upon in our strange, beautiful, compelling little wavey world.

Eight, to be precise. 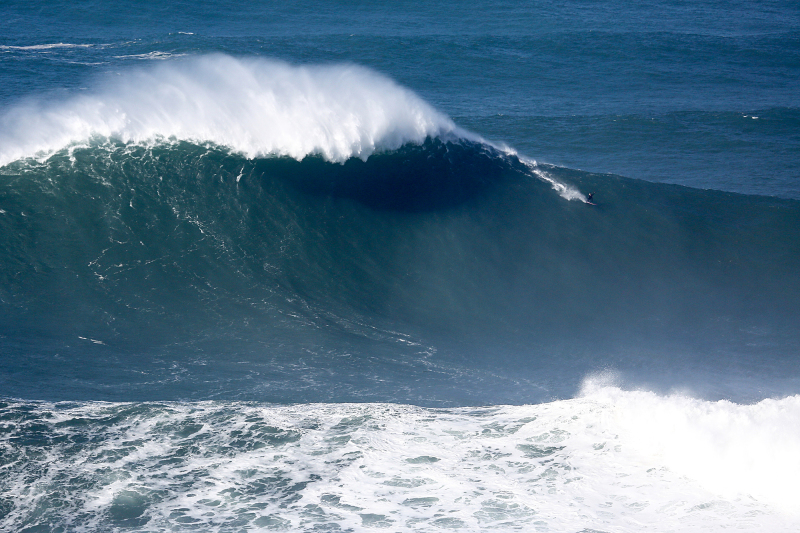 Big wave surfing will continue to be at the forefront of progression and growth in the sport.

After all, if the holy grail really is turning on a non-surfing audience, well convincing them of the nuances of Conner’s rail work versus Wade-o’s, and then asking them to be excited about those differences will always be a tough sell.

On the other hand, surfer-standing-at-top-of-giant-wave, might fall off, might die, will always grab instant care factor. Or to put it another way, as a former digital publishing boss of mine liked to say, “Nobody event went broke overestimating the stupidity of the general public”.

WSL’s Big Wave Tour events generally run in a single day, and by definition, are epic. The waves are always pumping. Lots of wins there for the fan.

Justine Dupont continues her charge and becomes the best pound for pound big wave surfer in the world, with Lucas ‘Chumbo’ Chianca close behind. 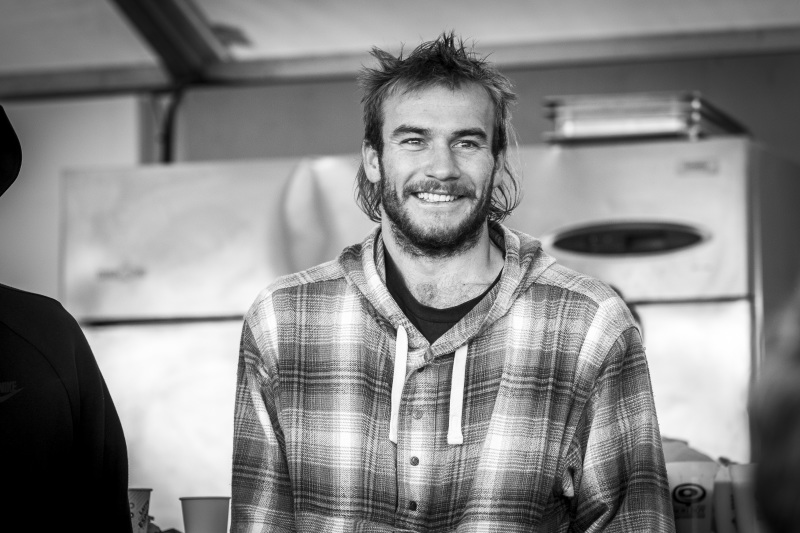 Mikey’s fame – just like his mullet – is on borrowed time. Maybe. Photo: WSL/Poullenot

2. Mikey Wright Trims His Mullet, Fades out of Sight

Surfing and hair have long exhibited a symbiosis that even the clownfish and anemone would be envious of.

As a sport, our’s is surely the only one to have hair named after it, (“You know, Craig in accounts, the one with the downhill mountainbiker hair” said no one, ever) and probably exhibits the most clear relationship between an athlete’s commercial value and their Barnet.

“I wouldn’t be sponsored if I didn’t have long hair” Rob Page once said in middle age, at a time when less follically endowed surfers his age – with World Titles – were working in surf shops/building sites.

With that in mind, the potent combo of distinctive hair and peerless surfing is perhaps one of the reasons Mikey Wright requalified for the 2019 Tour via the CT, despite not actually being on it.

Alas, perhaps out of boredom, perhaps just fancying a change, mid way through 2019 Mikey will do the only hair thing gnarlier than growing the mullet – cutting off the mullet.

While his surfing will remain deadly, his aura will be more Bede-y, first the results will slide, then the sponsors will develop cold feet. Just like when Marti Pellow from Wet Wet Wet trimmed his mullet, his vibe will go from the shamanistic to the benign, he’ll come over well on the sofa on Breakfast TV, across the demograph.

In a few years, when the top is thinning savagely the way of Owen’s, even curating a super ironic Jim from Neighbours island at the front won’t be enough to arrest the slide into obscurity. 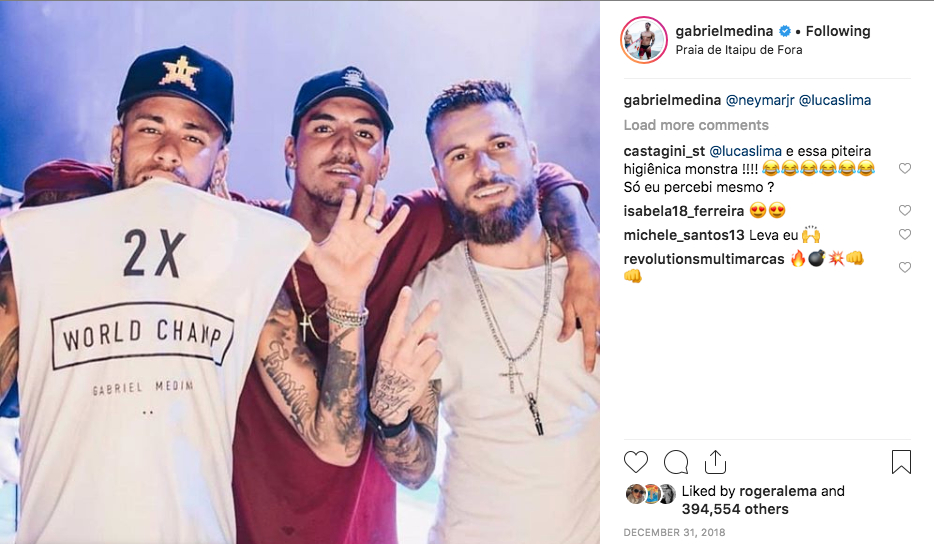 3. Elite Surfers Continue To Bromance Sportspeople Who Are Essentially An Extension of Their Own True Selves

Gabriel Medina celebrated his 2nd World Title by extensively hanging out with Neymar Jr (he’s a Brazilian footballer) and curating a portfolio of impressively vacuous Insty shots. Just like Gabs, Neymar is recognised for his incredible talent, although often in spite of an overall unsavoury air to his carry on, and misgivings about his suitability as the keeper of the flame.

Julian Wilson’s squad goals, on the other hand, have Adam Scott shaped posts. (He’s an Australian golfer.) While Scott doesn’t have the Seve charisma, the Fowler star factor or the Woods backstory, like JW, he’s bloody good, he’s handsome, he’s affluent. He has his own private jet, one Jules got a ride in, which is either a fascinating bit of surf/sport fusion goss, or otherwise.

In 2019, Griffin Colapinto will spending a lot of time in the nets with Joe Root, while Andrew Cotton and Eddie the Eagle Edwards will be rolling so tight they’ll only be distinguishable by close friends and family or by DNA extracted from Cotty’s Union Jack knee brace.

“Andrew Cotton and Eddie the Eagle will be rolling so tight they’ll only be distinguishable by close friends and family, or by DNA extracted from Cotty’s Union Jack knee brace” 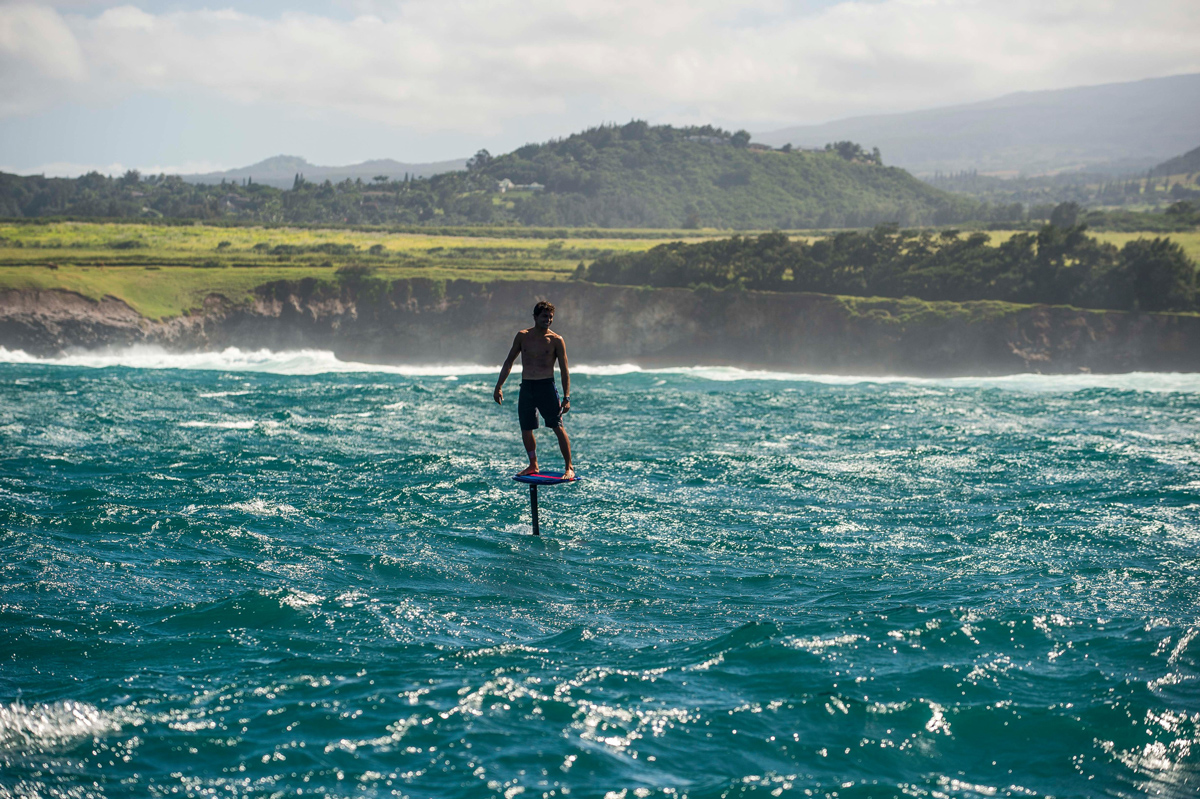 If you reckon you saw Kai Lenny changing the surf world via a 18″ board atop a carbon fibre stalk coming, you’re lying. Photo: Miller / Red Bull

If there’s one thing you have to hand it to surfing for, it’s coming up with new ways to foster craft-based prejudice and hatred. The surfer vs bodyboarder phoney war was always tedious, plus, well… we won, right?

Then came the SUP’s, the 21st century lineup turd sandwich. Disliked for danger, for wave catching ability, although you kinda have to admit it’s actually perversely impressive that one poorly operated SUP is actually capable of ruining and entire set for everyone else in the lineup.

In 2019, foiling will completely eclipse the SUP as the polarising surf craft, with its nuanced offering. They’re championed by your favourite surfer, leaving you more conflicted than the simple SUP in/out referendum. It’s hard to do, which has excellent non-inclusive vibes. They’re probably pricey, and almost certainly capable of removing the top portion of your skull, so easy to exception to.

But the real source of foil onlooker’s displeasure? While Kai Lenny can do that sort of flap up and down hump thing back to the lineup and look cool coz he rips universally, watching folk who actually surf like that, then go and do that between waves as well, non stop for an hour, well, good luck. 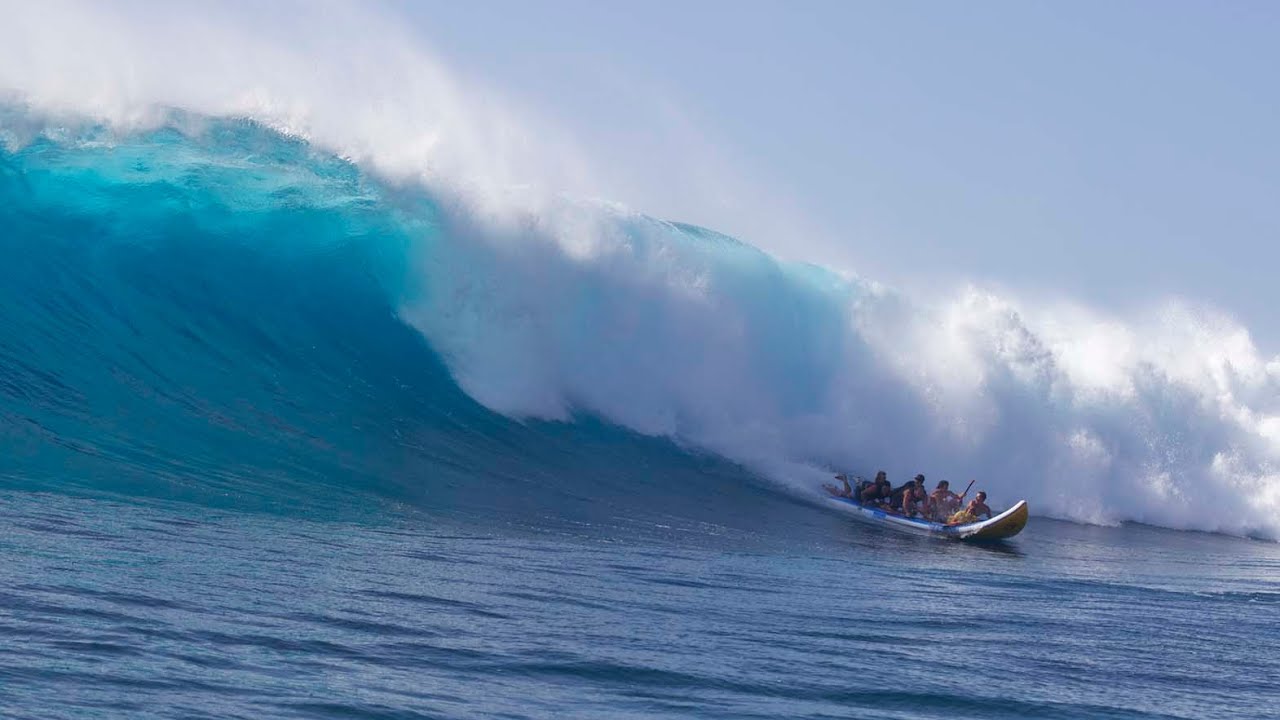 In all fairness, this Makaha effort by Jamie & crew is more than worthy of throwing arms up in the air.

5. A SubSquatch/Multi Surfer Ride Will Happen, Nobody Holds Their Arms Up

Whether it’s JOB, Poopies et al in Mainland Mex, or the Sage/Seabass/Whits triumvate at the Slater pool, multiple surfer on giant craft will always will get giggles.

So far though, in all the recorded history of such trandem to dodecadandrem rides, there has never been a case of at least one rider not holding aloft their arms in triumph at the end. The compulsion is believed to be more powerful than that for chewing a fruit pastel (which is actually easy to not do, to be fair).

However, in 2019, an entire crew will surf down a wave on a giant board, spin out and capsize in the whitewater while maintaining the studied, sombre vibe of a #shotonfilm logger/artist/ influencer, or a Lopez kickout, circa ‘76. 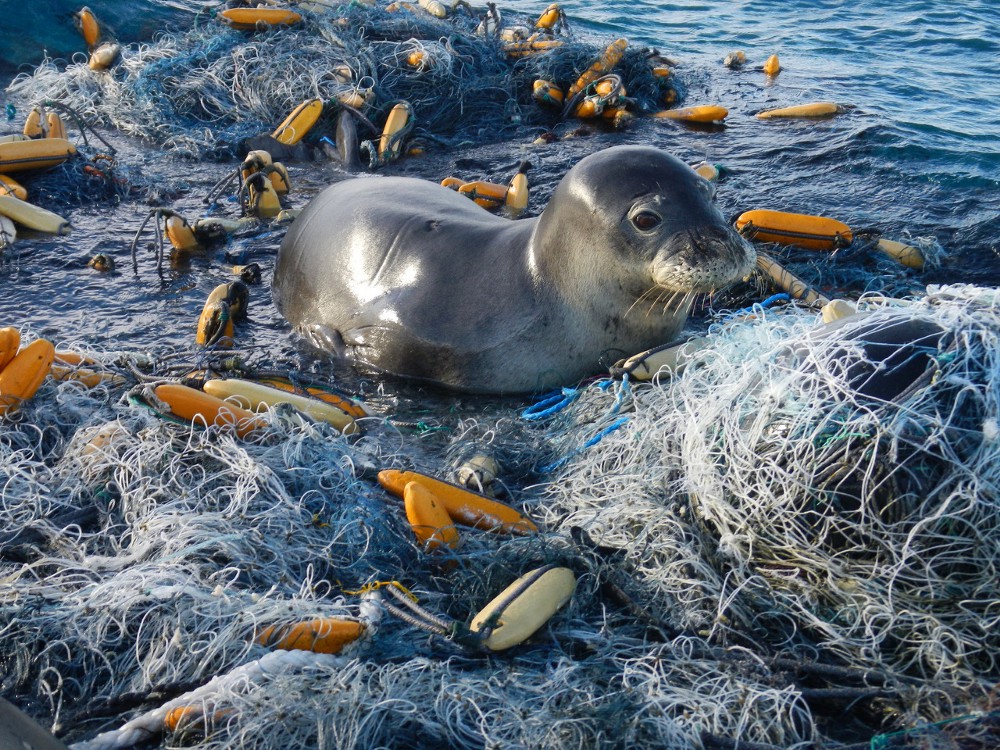 Yeah fishing! It’s all good though, just make sure you get your king prawns in your reusable tupperware, rather than single use plastic bags! #SaveThePlanet !

6. People Will Continue to Congratulate Themselves Publicly for Picking Up Plastic, Before Hopping on Long Haul Flights To Go Surfing & Guzzling King Prawns

Ocean plastic will still be a cause celebre, and quite rightly so. Sky News, not usually at the vanguard of environmental activism, will forge boldly on with Sky Ocean Rescue, which, if it sounds like it was workshopped over take out sushi in a London PR agency, well, that’s because it was.

Elsewhere, random acts of offshore paddling etc etc go down under the guise of somehow helping clean the seas, three strapping, posh, postgraduates will row the Pacific, which cynics among you will incorrectly label an ego trip/publicity stunt, when it is actually a deadly strike to the very heart of rampant consumer capitalism, obvs.

The non-endurance athletes you can still virtue signal your strong eco credentials by Instagramming your beach clean efforts, before promptly flying to Indo on a surf trip, eating king prawns, maybe sending another Congolese 7-year-old down a mine for your new ‘device’ etc, etc.

Last year, the excellent environmental journalist George Monbiot had a pop at Dave Attenborough (David Attenborough Has Betrayed The Living World He Loves ) for leaving out the almost complete destruction of ocean ecosystems by commercial fishing, to instead champion the ocean plastic cause on Blue Planet 2.

The ocean plastic problem, Monbiot said, was ‘perhaps much worse in long term than anyone realises, but still almost insignificant compared to the collapse of the global marine ecosystems at the hands of the fishing industry’.

The fact that ocean plastic is estimated to be at least 50% made up of fishing gear, suggests that you should perhaps measure your true give a shit factor by what you eat, not what you take photos of yourself picking up.

Although, hang on a sec, advocating eco love can only really be a good thing. After all, you reap what you sew and all that.

Well, apart from fishing of course… where you reap what you didn’t. 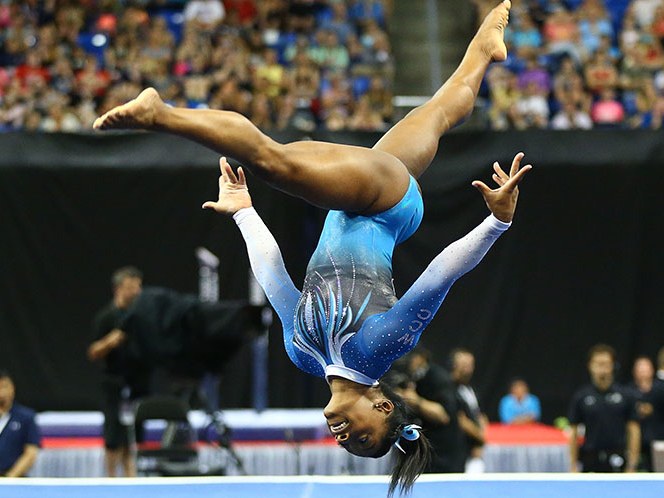 If you like watching people do flips, you’ll love gymnastics. The parents are even more vile than junior surf comp dads!

7. Somebody Will Do Front Flip on a Windy Day in Maui

Has anyone actually done a front flip already? I must admit do struggle a bit to keep up. I’ve always felt the progression thing in surfing – in terms of individual manoeuvres at least – is a little bit overplayed.

If today’s leading surfers were regularly doing Curren at J-Bay flow, TC at Pipe sack, tuberiding like 1995’s Desert Challenge and Dane at Haleiwa closeout bangers, I wouldn’t be yearning for spindles.

I wouldn’t be pining for Instagram comment arguments about the degrees of rotation, or what kooks we are coz snow/skate actually call that a zzzzzzzzzzzz…

I think I’d be fine. 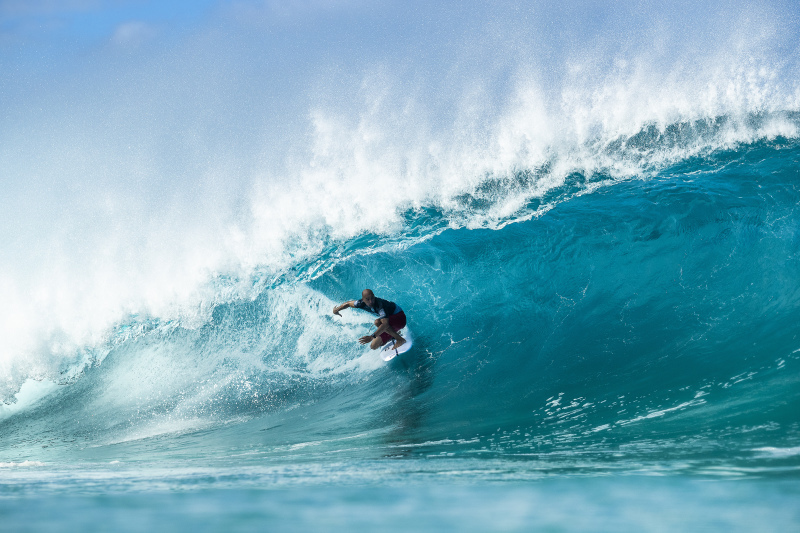 GOATs are like mums, really. You only get one, and when they’re gone, they’re gone forever. Photo: Cestari/WSL

Feels like we shouldn’t have a prediction piece without the Slater. Rightly awarded a WSL wildcard into the 2019 CT, alleged foot injury all healed, his season with either be fascinating or very similar to the last 5, with those vaguely tragic, uncle that won’t leave the party feels.

I’d like to think than in an ideal world, he’ll win an event, make this his very last lap, and go off into the sunset at the very top, where he belongs for ever and ever amen.

Only reappearing from time to time the day after anyone else does anything awesome, to unveil a new wavepool or equivalent. Not so much to steal their thunder, as reappropriate their pageviews, ravenously sucking the fame marrow from their career carcass.

For ever and ever amen.