[This winter we teamed up with JJF’s long time sock sponsor Stance to offer every new subscriber to Wavelength a free pair of John’s new signature Swell socks. Get yours here.]

Contrary to popular folklore, sitting on cold stones doesn’t give rise to perturbations in your hoop. Sitting on fences, however, is known to cause outbreaks of dullness. It’s high time you pick a side.

This instalment of WL’s Culture Wars could be medieval trading route dispute between Tuscan and Arabian city states, but you know better than that.

It’s a pair of professional wave riders that well before their 30th birthdays, have each already secured a place in an exclusive pasture among a small, very select herd of GOATS. It’s pair of two-time world champions, Hawaii’s John John Florence and Brazil‘s Gabriel Medina.

The altitudes our contenders have scaled are symbolic, of course, the heights of athletic performance, skill and fame. But who is more narcissist than nihilist?

What’s brought all this on?

Sporting rivalries go back since time. For the ancient Greeks, Athens and Sparta used to love to hate each other when vying for glory in Olympia.

Sport itself, without some grudge, justified, tribal, irrational or otherwise is just people running about, then someone wins.

In surf, the juiciest rivalries come and go with the eras, often pitting distinct personalities against each other, leading surf nations, or both.

Nat vs Midget, MR vs Shaun, Curren vs Occy, Slater vs Andy all stand out. And while Slater and AI had that all important genuine dislike of each other, the surf world kinda foisted the John / Gabriel rivalry upon them to fill a hole, whether they disliked it or not.

It’s a big hole, too. Pro tour surfing can seem inherently meaningless enough as it is, we need our rivalries more than most sports, just to maintain a pulse.

The JJF/Gabs war tends to be waged by proxy in caps lock comment threads, without the surfers themselves ever really needing to buy in.

Gabriel doesn’t seem to reserve particularly more relish for beating John than beating any and everyone else, he loves to vanquish all comers equally. While John… well it’s traditionally quite hard to tell what he thinks.

It may have been Beach Grit’s Derek Rielly who described (an admittedly younger) John’s three facial expressions as, “Confused, confused, and about to cry…”

He’s moved on since, got himself a happy and an I’m doing a joke face, but you get the idea. 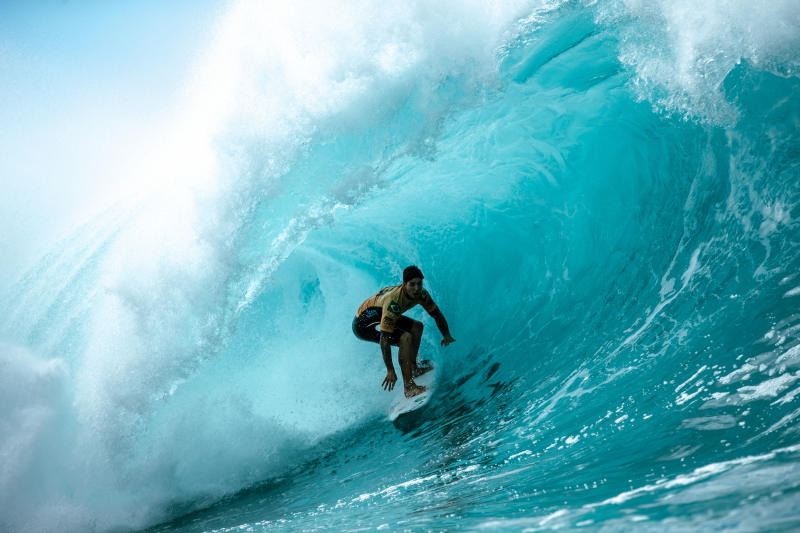 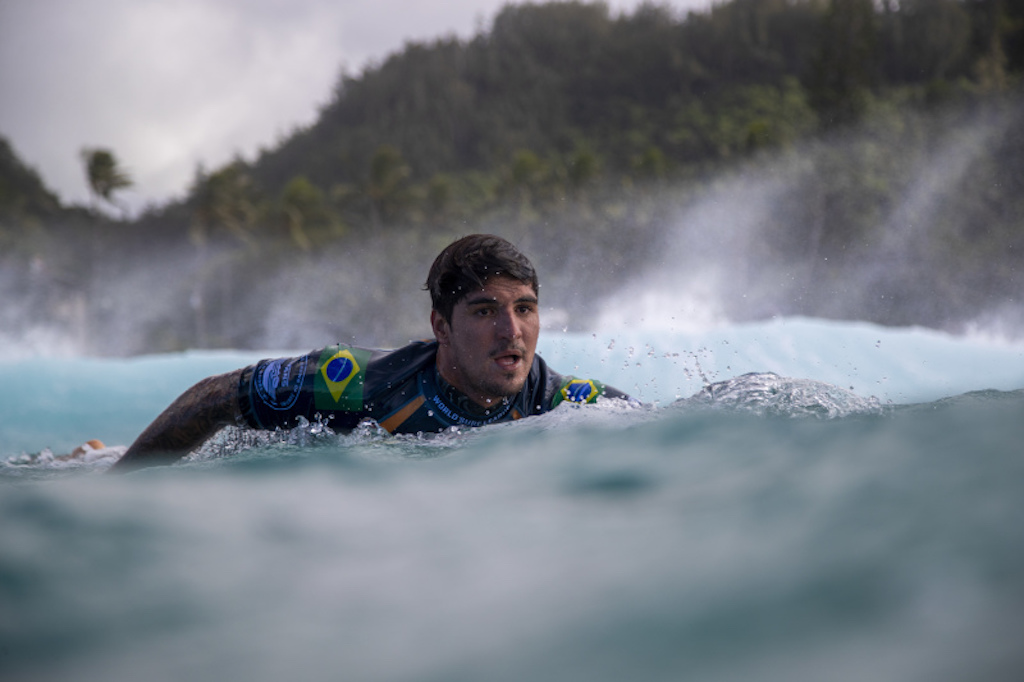 It is often given in evidence of Medina’s tactical nouse and intensity that he ‘Likes to get a strong, fast start’. Presumably in contrast to those tour surfers who prefer a weak, slow start. Photos: WSL/Sloane, WSL/Neff

Since the two got on Tour together in 2011, Gabriel tends to win the head-to-head match ups. But surf stat validity is even more spurious than most sports, and often less revealing.

Doubtless Gabriel is the better, more intense, competitor. John is clearly better at Waimea*. Beyond that, there’s relatively little to separate them.

Thing is, objective truths, facts and stats matter little in culture wars. It doesn’t matter who’s better, it matters which one you love… to hate.

*Pipeline would seem an obvious point of difference… although John’s never won the Pipemasters (multiple Pipe Pro QS wins) while Gabs has (2018). The last Hawaiian to triumph there was Andy, way back in 2006.

Medina has, rather generously, made it very very easy to be disliked by his detractors, traditionally Anglophone surf fans from the US and Australia.

A crying tantrum after losing a close final at Peniche against Julian Wilson and refusing to do the podium, a general hassler vibe. The Slater burn (quite within his rights as the priority heat) at Backdoor, and more recently the Caio Peniche & Pipe acrimony.

Factor in the shaved arm pits, the general vacuousness of Neymar Insty hangs, all these are petrol on the hater’s raging fire.

With Gabriel setting himself up as the baddie, John doesn’t need to do much to be the alleged goodie, so much as just keep himself to himself while maintaining a largely understated North Shore core lord status.

Being into the sailing of boats might further your sympathies towards him if that happens to be your thing, but is very unlikely to radicalise you against him if not. 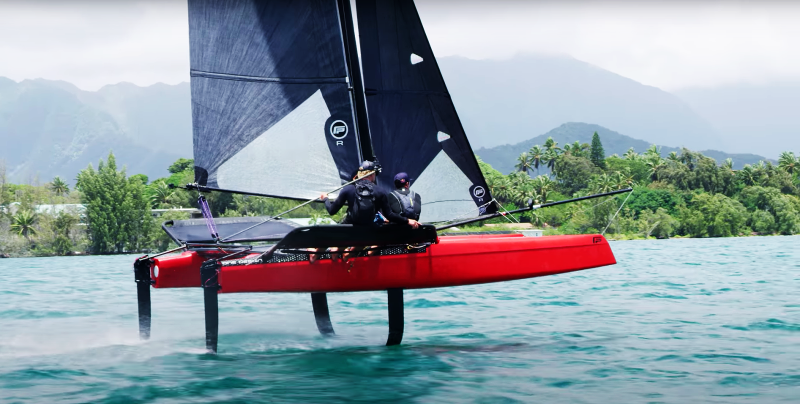 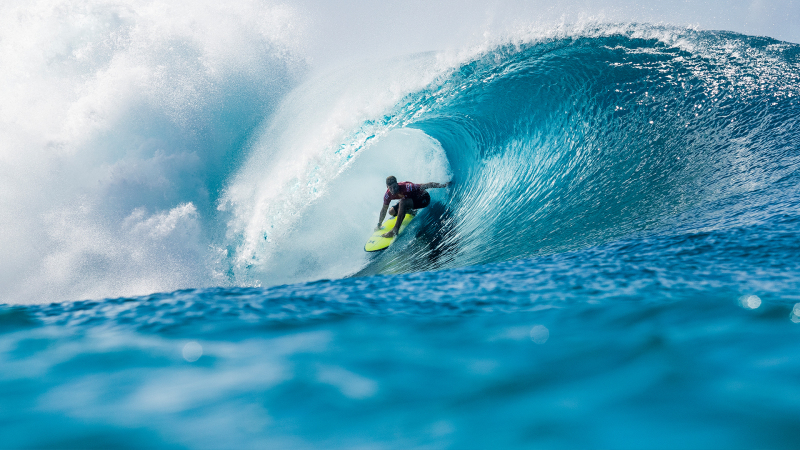 (L) In a stark departure from Medina’s pro surfer-as-baller swag, Florence has doubled down on a post-normcore watersport enthusiast tip. Photo: Parallel Sea (R) Despite having the biggest homefield advantage of anybody on Tour, going into the 2020 Pipemasters, Florence is as yet without a Pipemasters win. Photo: Neff/WSL

If you sat down with a blank sheet of paper to design the ultimate pro surf champion hero, it’s unlikely you’d include a scowling, hunched pantomime villain of a step dad at the water’s edge who occasionally gets banned from Tour events by the judges for public outbursts.

Now consider the polar opposite proposition, a tall, blonde mum in knee high Vans socks skating a local bowl on Insty. As far as I’m aware, Alexandra Florence has never knowingly scowled at a score on a webcast, partly because she’s hardly ever on the webcast, which is probably a decent call.

What precise function Gabriel’s step dad Charlie has, quite why he is on camera so much, is hard to say. Gabriel is so good, it seems to matter little either way. Any sports coach or performance expert will probably tell you the spectre of an intensely glowering parent, theatrically amplifying every blow by blow in the encounter from close quarters, is generally not associated with heightened performance in the offspring.

As a mark of his class, Gabs seems to prevail in spite of, rather than because of the spectacle. 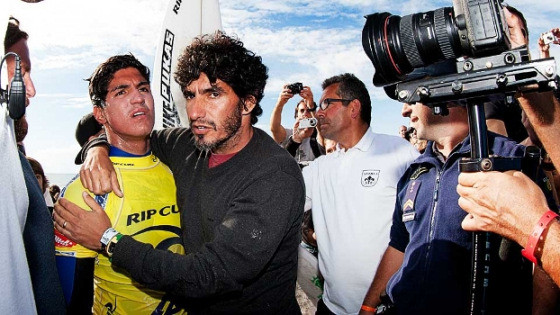 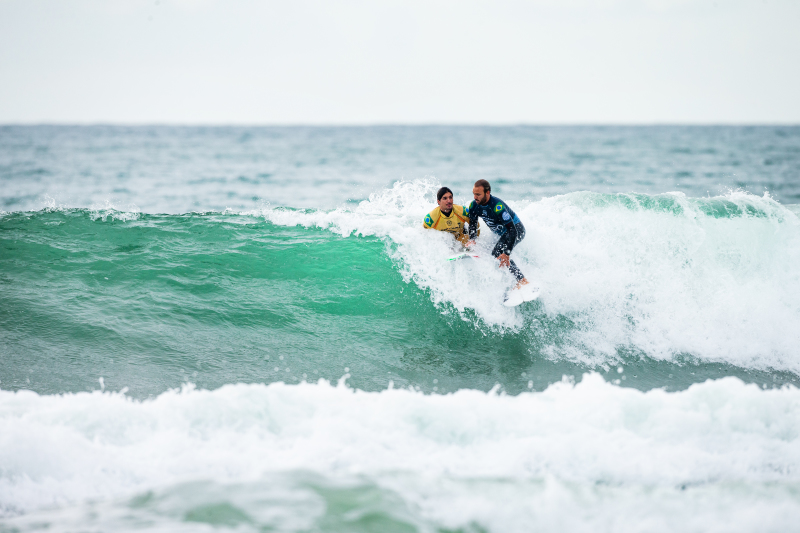 Scenes, Supertubos. (L) A controversial loss vs Julian Wilson in 2012 had Brazilian fans screaming foul play and everyone else heckling ‘boo-hoo’. Photo: Cestari (R) The paddle that cost Gabriel a (probable) 3rd World Title, but gave us the most dramatic season finale in memory. Photo: WSL/Masurel

Brazilians used to have reps as small wave, beachbreak specialists, whereas these days, as well as dominating the Tour with the best progressive surfers, they also charge as hard as anyone in the world.

Without doubt, Brazil is the leading surfing nation on the planet, and Gabriel has done more to bring that about than anyone else.

Brazil’s recent flowering on the global stage can only be considered a major plus for the sport as a whole. In terms of adding colour, the Brazilian flag is probably least offensive of any major nation’s. It’s a beautiful arrangement of shape and colour, exotic green n’ yellow, deep celestial blue, a rhombus, a spinning planet, a non-seriffed Ordem E Progresso. A truly wonderful flag, and surfing is all the better for its brandishing on any and every finals day.

By contrast, Hawaii has never needed to endear itself to surf fans from elsewhere. As the birth place of the sport and the keeper of the flame, it is very much the established order.

John represents a hallowed lineage of island greats that goes back until time immemorial. If carrying that weight is a burden, he’s shown very little sign of it. Hawaii will never have the numbers to match Brazilian surf fans, much less the noise. But in terms of heft, Hawaii has it. 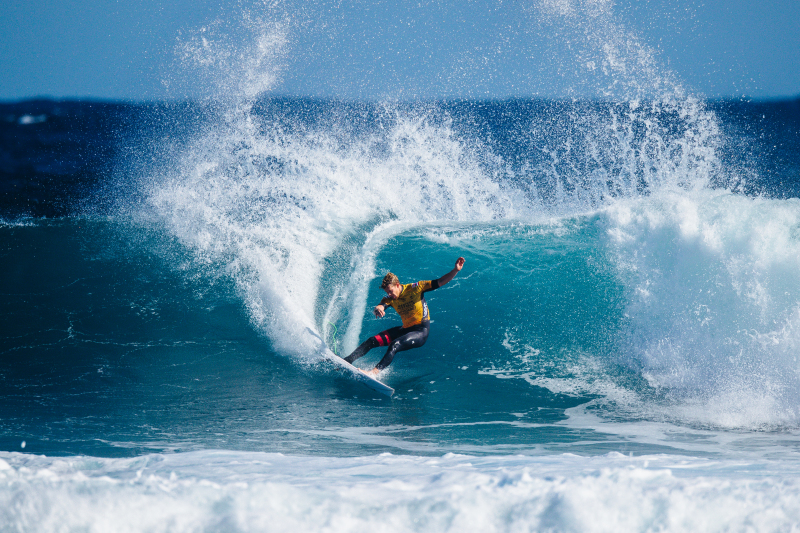 Perhaps Florence’s most surprising Tour contribution was to make Margaret’s right highly watchable, something for which, presumably, surf fans of all allegiances thank him. Photo: WSL/Dunbar

In truth, the fan fault line probably falls squarely on where you come from, leaving very little room for rationalising an actual preference. Fantasy Team silliness aside, if a non-Brazilian (or South American), non Rip Curl employee has ever cheered for Gabriel over John, well they’ve probably done it quietly.

John has not only been much less controversial, but also a lot more careful about how the world sees him. There’s not a huge leap from art to artifice, after all. John’s body of work is largely curated, a string of amazing films and edits, the product of thousands of hours of careful scrutiny. Ultra radical, yes, but in terms of the finished article, the opposite of spontaneous. More, ‘I want the world to see me exactly like… this.’

Staggeringly impressive as that is, there’s something to admire in the realness of Gabriel, as his career is largely played out live, raw and unfiltered.

Aside from a few landfill clips for the E-Bomb anorak or a watch that tells you how many times he paddled inside, it’s refreshingly uncalculated.

Medina clearly doesn’t really give a fuck. Burn a friend, sulk, stitch up, punch down. There’s something uniquely compelling about Medina’s performances, that goes far beyond what he’s doing with his waves.

Florence you love to watch, Medina you have to watch.

The Tour was found lacking when Florence was absent through injury through much of last year. But you get the feeling it could be a whole lot worse without Gabriel.

With Christmas fast approaching, we’re here to help you procure the perfect gift for the surfer in your life, or pick out a little something for yourself.    Last week we unveiled [...]

Culture Wars: Wavepools Vs The Sea

It's time to make surfing great again, and take back control (of pushing the button that sends the set to the 3.45pm intermediate group in purple rashies). Whether you're for surfing being for the [...]